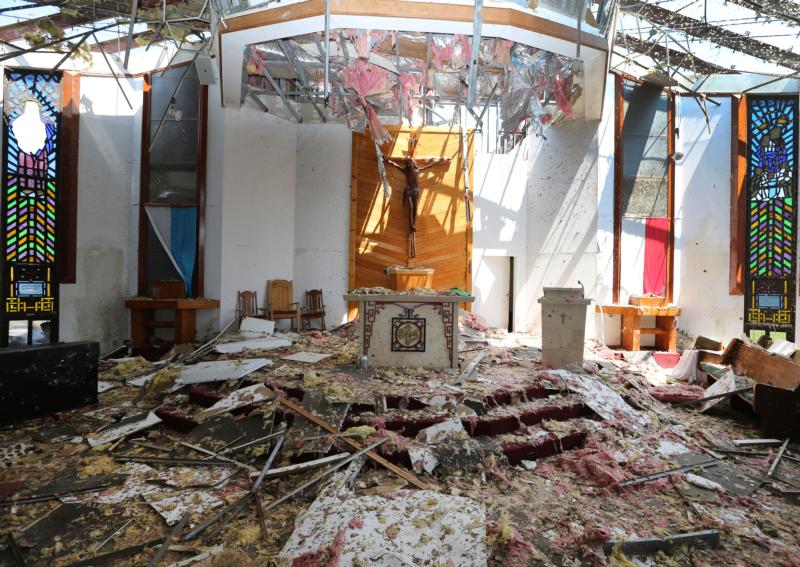 Debris surrounds the altar of the destroyed St. Peter Church in Rockport, Texas, following Hurricane Harvey in 2017. The Federal Emergency Management Agency is revising its policies to no longer exclude houses of worship from applying for federal aid to recover from storm damages. (CNS photo/Bob Roller) S

WASHINGTON (CNS) — The Federal Emergency Management Agency is revising its policies to no longer exclude houses of worship from applying for federal aid to recover from damages caused by natural disasters.

This change is not just for damage caused in future disasters but also affects claims made by churches last year from Hurricanes Harvey and Irma because it can be applied retroactively to claims made “on or after Aug. 23, 2017.”

An introduction to the new FEMA manual credits the change in policy to a Supreme Court decision last June, which ruled that Trinity Lutheran Church in Missouri should not have been denied a public benefit just because it is a church. The court’s 7-2 decision specifically referred to the church-run preschool and said it should not be excluded from a state grant program to refurbish its playground surface just because it is a religious entity.

“In light of the Trinity Lutheran decision, FEMA has considered its guidance on private nonprofit facility eligibility,” the agency’s new document says, pointing out that houses of worship would not be excluded from eligibility for FEMA aid on the basis of the religious character or primarily religious use of the facility.

Daniel Blomberg, an attorney for the Becket Fund, representing Texas churches and Florida synagogues that have sued FEMA over not getting federal disaster aid, welcomed the policy change.

“Better late than never,” he said in a statement. “By finally following the Constitution, FEMA is getting rid of second-class status for churches, which in the words of the Supreme Court was ‘odious’ to the First Amendment. We will watch carefully to make sure that FEMA’s new policy implemented to provide equal treatment for churches and synagogues alongside other charities.”

Carl Anderson, CEO of the Knights of Columbus, was similarly pleased with the FEMA decision.

“The destruction due to the flooding and hurricanes is of such a magnitude that the government must help in the response,” he said in a statement.

The Knights of Columbus have given $1.4 million to repair or help rebuild churches that were destroyed or badly damaged in hurricanes last year in Texas, Florida and the U.S. Virgin Islands. The organization also raised $3.8 million for disaster relief in these areas.

Anderson said church repair has been a key component of Knights’ relief efforts, stressing that “help from both the government and the nonprofit sector in the restoring of churches and other spaces dedicated to religious activities will send an important signal that these communities are coming back, that the spirit of the people is alive and well.” It also helps these houses of worship with the many charitable and social services they provide, he added.

The battle over getting federal funds to restore storm-damaged church property has been in a legal tangle since last year when three Texas churches severely damaged by Hurricane Harvey were denied federal aid. The churches filed a lawsuit against FEMA over its policy accusing the agency of religious discrimination. Two Florida synagogues damaged in Hurricane Irma similarly filed lawsuits.

The Texas churches appealed the agency’s decision to the 5th Circuit Court of Appeals, which denied them emergency relief but agreed to hear the case in February. Another request for an emergency injunction for these churches has been pending at the Supreme Court.

The three churches are the Rockport First Assembly of God in Rockport, which lost its roof and steeple and had other structural damage, the Harvest Family Church in Cypress, and Hi-Way Tabernacle in Cleveland, which were both flooded.

President Donald Trump has said on Twitter that places of worship damaged in hurricanes should be able to receive federal aid from FEMA.

This past fall, the issue of FEMA disaster aid going to faith-based groups has been making its way through Congress. In late November, a committee approved the Disaster Recovery Reform Act which would open the doors for church groups to seek FEMA aid, but the bill was awaiting deliberation from the House floor.

Chairmen of the U.S. bishops’ Committee for Religious Liberty and the Committee on Ecumenical and Interreligious Affairs supported the measure in letters sent to members of the House and Senate.

The letters, signed by Archbishop William E. Lori of Baltimore, chairman of the religious liberty committee, and Bishop Mitchell T. Rozanski of Springfield, Massachusetts, chairman of the ecumenical committee, said the bill regarding FEMA aid and houses of worship “is not asking for special treatment, just equal treatment that conforms to constitutional protections.”

“It should be noted that in the aftermath of a natural disaster, houses of worship often play an irreplaceable role in the recovery of a community,” they wrote. “Discrimination that treats houses of worship as ineligible for federal assistance in the wake of a natural disaster, beyond being a legal violation, hurts the very communities most affected by the indiscriminate force of nature.”

NEXT: Mercy sisters embark on solidarity week with immigrants via social media