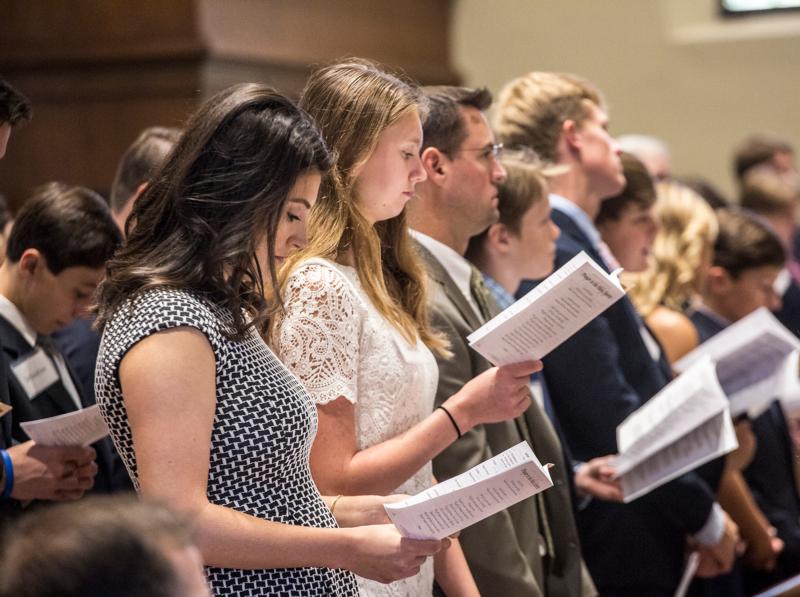 Massgoers sing at St. Paul on the Lake Church in Grosse Pointe Farms, Mich., in May 2017. A recent study by two Detroit-area Catholic sociologists suggests participation rates during parts of the Mass may increase when Massgoers are more familiar with the songs or rituals. (CNS photo/Larry A. Peplin, Special to The Michigan Catholic)

DETROIT (CNS) — So who really is singing “Gather Us In” at Mass?

Does the pastor asking people about their week really make the Mass friendlier and more engaging? Why is the Our Father so engaging? Do people like singing new songs at Mass, or do they prefer tried and true hymns they have been singing for years?

Two local Catholic researchers are trying to find out.

The study’s primary aim was to discover which parts of the Mass local Catholics were most actively engaged with, and which parts lacked participation.

“We wanted to do research on tuning and dis-tuning at a typical Sunday liturgy,” Ligas told The Michigan Catholic, Detroit’s archdiocesan newspaper.

Ligas is a retired orthodontist and McCallion was hired in 2005 as the sociologist on staff for the seminary’s licentiate program.

“I was telling John a while ago, there are studies — not many — that argue only 20 percent of Catholics participate in Mass,” McCallion said. “(These) are … very general studies that don’t get at what participating actually looks like.”

McCallion and Ligas went about observing 35 liturgies across 10 parishes — three parishes in the Chicago Archdiocese and the rest in Detroit’s northern suburbs. The pair discretely took notes on who at Mass was actively participating in the Our Father, the opening, closing and communal hymns, the Gloria and the responsorial psalm along with other parts of the liturgy.

“A good analogy would be at a football stadium,” Ligas said. “Everybody is watching the game, but who is participating in ‘the wave’? Who cares about what’s happening on the scoreboard? Who is checking their phone? We feel the Catholic liturgy is a collective action. So what things contribute to the collective actions and what distracts?”

Recognizing the limitations of conclusions one could draw from the observations of two people in a limited scope, McCallion and Ligas just focused on who was singing at Mass.

“At every liturgy at every church we observed, everyone joined in for the Lord’s Prayer,” Ligas said. “On the other side of the coin, the responsorial song was a bust, if you consider how many are participating and how many are not.”

The summarization of the Ligas’ and McCallion’s research boils down to the idea that Catholics are more apt to verbally participate in parts of the Mass that are more ritualized, such as the Our Father. The response to the general intercession had the highest rate of response and participation, while more “changeable” parts of the Mass, such as the hymns, psalms, or the pastor asking the congregation to greet one another, tended to have low rates of participation.

“From our initial responses, we found that ritual comes to form again,” McCallion said. “If people are not singing the same songs, people are less likely to sing. That’s our hypothesis that bore out in the data. Some hymns, some other parts of Mass that are constant, we found a greater rate of response.”

Ligas and McCallion did make other observations at the Masses, from how many times people check their cellphones, to what they wear at Mass, but limited their analysis to participation in singing.

“We might have had a feeling the Lord’s Prayer was going to be No. 1 as far as the congregation participating,” Ligas said. “But we were shocked with just how poor the responsorial song is.”

The initial analysis implies that when pastors and music directors change the pattern of the liturgy in an effort the make the Mass more accessible, it tends to have the opposite effect.

“When you know what’s going to happen, you will know what’s going on,” McCallion said. “When you go to a baseball game, nobody is sitting right next to you telling you every single rule. You just know them, because of the repetition. You know what you are supposed to be doing to enter into the collective ritual.

“The liturgy is supposed to be a communal event, but American postmodern culture is really focused on individualism,” McCallion said. “I’d argue that our liturgy has been affected by individualism. Sometimes as, Emile Durkheim (a sociologist who studied the Mass) said, the ‘secular invades the sacred.'”

The tension between making the liturgy a communal prayer experience while at the same time fostering an individual relationship with Christ is something everyone involved with liturgy — pastors, music ministers and catechists — will have to address in the new evangelization, McCallion said.

The concept of a solely personal relationship with Jesus is a Protestant influence on the Catholic Church, McCallion argues, since the Catholic liturgy invokes the intercession of a communion of saints and the collective prayers of the church.

“In the liturgy, both sacramentally and sociologically, the whole is larger than the sum of its parts,” McCallion concluded. “When we come together for Mass, something happens that can’t happen when we’re by ourselves. From a Catholic perspective, we hope the communion of saints, our deceased family members, are still praying for us.”

McCallion and Ligas want to expand their research to parishes in the inner city, along with Hispanic and Tridentine Masses, looking for similarities and differences in Mass participation between those liturgies and the liturgies they have already observed.

McCallion hopes the research they’ve already done can be used by pastors and music ministers to better prepare a Mass that encourages more participation.

“All we are arguing, from the conclusions of the data we’ve collected, is priests and musicians need to come up with habits that encourage the social or communal ritual practices that people need,” McCallion said. “Maybe encourage more seminarians and priests to take courses in ritual studies, recognizing the importance of ritual. It would help people to have a more personal, as well as a communal, relationship with Jesus.”

PREVIOUS: Head of March for Life calls abortion ‘social justice cause of our time’

NEXT: Security expert says wall would be costly symbol of exclusion, bigotry