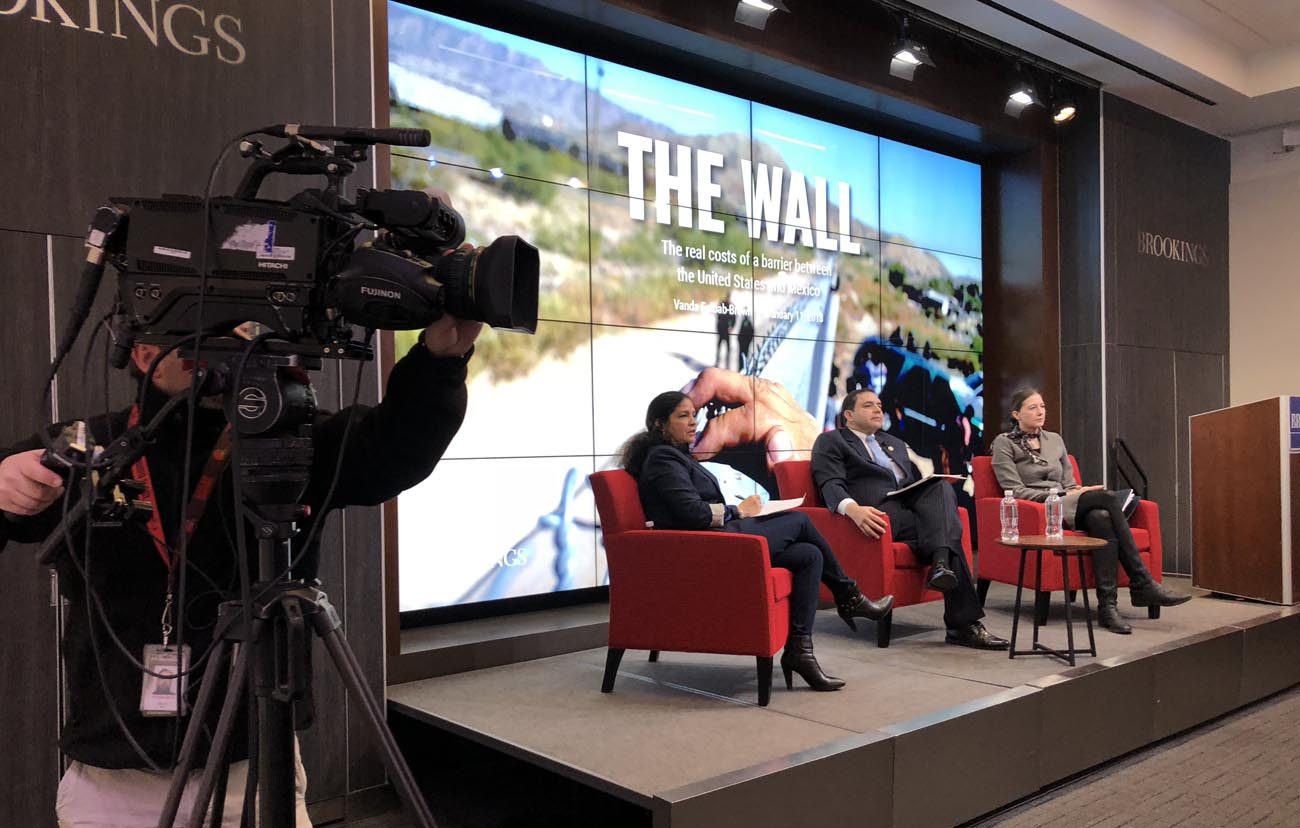 Maria Pena, Washington correspondent for the newspaper La Opinion, moderates a panel about the proposed border wall with Mexico Jan. 11 at the Brookings Institution in Washington. Democrat Congressman Henry Cuellar of Texas and Vanda Felbab- Brown, a senior fellow at Brookings, answered questions about the costs, financial, social and environmental, of the proposed wall.(CNS photo/Rhina Guidos)

WASHINGTON (CNS) — A scholar at a Washington think tank says the Trump administration doesn’t understand the financial, social, environmental and other implications of building a bigger border wall with Mexico and may push the country into paying for a costly, ineffective structure that would only serve to symbolize the sentiments of those in the U.S. who embrace bigotry.

“The wall, as the president embraces it, with his attacks on Muslims and other communities, with his resentment toward NAFTA, is not simply about creating a physical structure but about creating barriers and divisions in one’s mind and promoting politics of exclusion and bigotry, the very opposite of the American creed,” said Vanda Felbab-Brown, a senior fellow at Washington’s Brookings Institution.

At a Jan. 11 presentation of “The Wall: The real costs of a barrier between the U.S. and Mexico,” Felbab-Brown said not only would Mexico never pay for the wall, as President Donald Trump promised, but if it’s built at all, funded with taxpayer money, the structure would “not enhance security, it will not stop contraband or people reaching the United States, it’s not going to improve U.S. economic well-being,” she said.

It also won’t stop the people who come into the country legally but remain long after their visas have expired, she said.

Felbab-Brown is an expert on international and internal conflicts and nontraditional security threats, including insurgency, organized crime, urban violence and illicit economies. She said traffickers “will simply go above (the wall), under, and over it” to smuggle their contraband.

“They will use technologies such as drones and catapults to flow drugs over and they will build tunnels that go under the wall,” she said.

As a candidate, Trump spoke of building a “great, great wall on our southern border, and I will make Mexico pay for that wall.” As president, he is said to be asking Congress for $18 billion in taxpayer money for the initial phase of building it.

“While it will fail at great expense … it comes with other problems, such as hurting the lives of U.S. border communities, Native American communities, as well as damaging the environment,” said Felbab-Brown.

The existence of the structure will increase crime in ports and bodies of water, where smugglers will redirect some of their trade, and it will take away attention and money from the country’s 52 points of entry that deal with the movement of millions of people, cars, trucks and goods, she said.

Budgetary trade-offs taking place to get the initial funding for the wall will shortchange the U.S. Coast Guard, making less money available to fend off real threats to ports far from the Mexico border, Felbab-Brown said.

“The threat of some major terrorist activity in a port in a place like Boston or New York or Baltimore is far more significant than the land dry crossings or even crossings of immigrants across the border,” she said. “My take is that we are taking the least effective element of border counterterrorism, security, U.S. homeland security and giving it a tremendous amount of money that amounts often to a waste of money.”

Congressman Henry Cuellar, a Democrat from Laredo, Texas, the country’s largest inland port, which is close to the Mexico border, joined Felbab-Brown in a panel following the presentation.

Those who don’t understand the border favor the wall and addition of enforcement, such as the National Guard, near it, Cuellar said. But to stop activity that some people don’t want, such as illegal border crossings, you need a different strategy, one that favors improving conditions in the home countries of those emigrating, he said.

You also need the cooperation of countries such as Mexico, which has a strong visa program and keeps an eye out for those passing through its borders intent on doing harm to the U.S., preventing harm to its neighbors to the north, the congressman said, adding that angering Mexico and its citizens makes the border less safe.

Many U.S. bishops and other Catholic groups have long favored and actively advocated for such policies that strengthen the social fabric of struggling countries and economic opportunities abroad. If unemployment is low and there is peace in certain regions, they argue, people won’t see the need to leave their native countries.

Pope Francis has publicly called for building metaphorical bridges of understanding, not walls, perhaps in a thinly veiled reference to Trump’s proposed border structure with Mexico, and has advocated for helping those fleeing violence or economic strife.

It’s a view in direct contrast to the Trump administration’s worldview, which is to limit legal as well as illegal immigration no matter what the circumstances and to erect legal and physical barriers.

The border and what to do about it may be a sticking point in immigration negotiations Capitol Hill is faced with this year. The president, however, is said to be scheduling a trip to visit prototypes of the structure after his first State of the Union address Jan. 30.

Cuellar said meetings among lawmakers concerning any possible immigration deal this year involve four topics: dealing with the border wall; finding a permanent solution to help some 800,000 young adults brought to the country illegally as minors before the first of their permits expire March 5; addressing lottery or diversity visas the president says he wants to do away with; and considering whether to continue family reunification visas.

Faith leaders are imploring Congress to at least give immediate reprieve to the young adults who are set to lose what little legal protection they have in a few weeks and not use the youth as leverage in exchange for a deal on the wall.

Some news agencies reported in mid-January that White House Chief of Staff John Kelly had said in meetings with Democrats that the promises the president had made as a candidate regarding the wall had been “uninformed” and building the wall along the entire border likely was not feasible.

That may have prompted Trump to tweet Jan. 18 that “The Wall is the Wall, it has never changed or evolved from the first day I conceived of it. Parts will be, of necessity, see through and it was never intended to be built in areas where there is natural protection such as mountains, wastelands or tough rivers or water. … We need the Wall for the safety and security of our country. We need the Wall to help stop the massive inflow of drugs from Mexico, now rated the number one most dangerous country in the world. If there is no Wall, there is no Deal!”

Far from Washington, organizations such as the Hope Border Institute in El Paso, Texas, say they already live with the consequences of a barrier.

“While these senseless debates are taking place in Washington and in the media, we the border communities like El Paso, we already have a border wall,” said Dylan Corbett, the institute’s executive director, in a Jan. 18 conference call.

“We’re separated by something more sinister,” he said, “a massive structure that’s intended to deter and break the spirits of the most vulnerable asylum seekers and refugees fleeing to the border seeking protection from extreme situations of violence, political instability, political persecution and hunger in Mexico and Central America.”

And what they have seen, he said, is that the U.S. under Trump has “weaponized our border” against the vulnerable.

NEXT: Catholic leaders urge Congress to adopt budget that protects the poor