Thousands of youth gather to rally, pray before March for Life 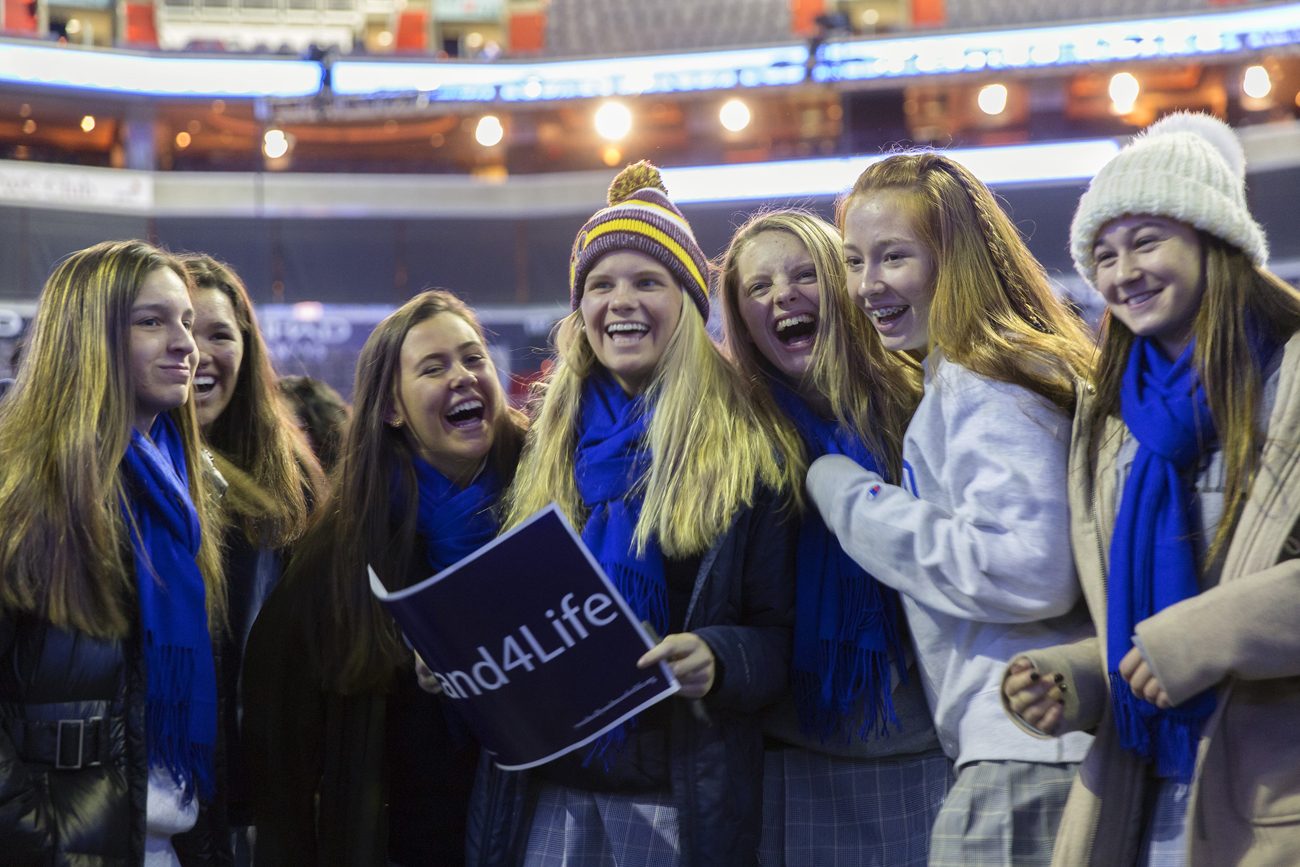 Students from Connelly School of the Holy Child in Potomac, Md., laugh together during a pro-life youth rally and Mass at Capital One Arena in Washington Jan. 19 before the annual March for Life. (CNS photo/Jaclyn Lippelmann, Catholic Standard)

WASHINGTON (CNS) — The Capital One Arena in Washington, which typically hosts professional basketball and hockey games and sold-out concerts, was filled with thousands of youth from around the country who gathered there Jan. 19 to stand up for life.

As groups filtered into the arena before sunrise, the band Out of Darkness welcomed them with worship music.

“It felt inspiring to me to see a lot of Catholics come together for something that is important to the church,” said Ashley Arevalo, a student at Don Bosco Cristo Rey High School in Takoma Park, Maryland. “It felt important to me to be a part of it. … We were all created in (God’s) image. … Everyone should be loved for who they are, no matter the circumstance.”

Grace Mesmer, a seventh-grader from Immaculate Heart of Mary Parish in Lexington Park, Maryland, also was struck by seeing so many of her peers in one place.

“I love seeing all the other people who share the same beliefs as me,” she said.

Washington Cardinal Donald W. Wuerl expressed a similar admiration for the throng of people who joined the rally.

“This is so, so exciting to see this entire arena filled with thousands and thousands of young people,” he told the Catholic Standard, newspaper of the Washington Archdiocese. “The next generation is every bit as committed to life as the current generation. It tells us that the future is very bright.”

Emily Wilson, the event’s master of ceremonies, recalled her experience as a young person feeling that it was difficult to stand up for her pro-life beliefs.

“In high school and college, sharing my pro-life beliefs was so unpopular,” she said. “Perhaps you’ve been mocked or ridiculed by peers or even teachers. … What you go through each and every day can be so discouraging.”

Despite such difficulty, she said, “these days it is our opportunity to be the pro-life generation … to not be afraid to stand up for the most vulnerable.”

When the students return to their schools and communities, Wilson said they can find strength in “the compassion, the joy, the love” they witnessed at that rally.

Keynote speaker Ryan Bomberger told the rally how he was conceived through rape, but that his mother courageously chose life. He was adopted, and grew up in a family with 12 siblings, of different races and different abilities. Of the 13 kids, 10 of them were adopted.

Growing up in this environment taught him that “diversity is powerful,” he said, but “sometimes what we share is more powerful.”

“Everyone in this arena has special needs … to love and to be loved,” he said.

Cardinal Wuerl was the main celebrant of the Mass and was joined by about 20 other prelates including Cardinal Theodore E. McCarrick, retired archbishop of Washington; Auxiliary Bishop Roy E. Campbell, Jr. of Washington; and Cardinal Daniel N. DiNardo of Galveston-Houston, president of the U.S. Conference of Catholic Bishops. They were also joined by about 200 priests from around the country.

As he opened the Mass, Cardinal Wuerl said the gathering was “a very dramatic manifestation of the new evangelization,” which is “the call to be confident in our faith and invite others to join us.”

Archbishop Christophe Pierre, apostolic nuncio to the United States, read a message from Pope Francis that offered a warm greeting to attendees and assured them of his closeness in prayer. Later in the Mass, Cardinal Wuerl gave the blessing that would allow participants to receive a plenary indulgence, if they also go to confession, receive Communion, and pray for the intentions of the pope.

Father Martino Choi, the parochial vicar of St. Patrick Parish in Rockville, Maryland, was the homilist at the Mass. Like Bomberger, he is alive because of his mother’s courageous choice to embrace life.

When his mother was pregnant with him, the doctor said that he would be born with birth defects and only have a year to live, so he encouraged her to have an abortion, he said, adding that she chose to carry him to term instead.

It was not that his parents were capable of “superhuman love” that made this possible, said Father Choi, but “what they had was faith.”

Noting the 60 million babies that have been aborted in the U.S. since the Supreme Court ruling, Father Choi said it is impossible to know what they would have become.

“Every life has a role to play in making God’s love known,” he said.

During the offertory, four students with special needs served as the gift bearers, delivering the bread and wine to Cardinal Wuerl.

After the Mass, many of the attendees joined the March for Life, walking up Constitution Avenue to the Supreme Court and U.S. Capitol, witnessing to the dignity of life.

“God has blessed me to be here today and to be a witness,” said Victoria Cole, an eighth-grade student at St. Columba.

“I think everyone should have a chance at life,” said Amaka Chukwura, another eighth-grader at St. Columba. “I don’t think it’s right to take away someone’s life without giving them the opportunity to live a good one.”

NEXT: Every child ‘a precious gift from God,’ Trump tells pro-life rally