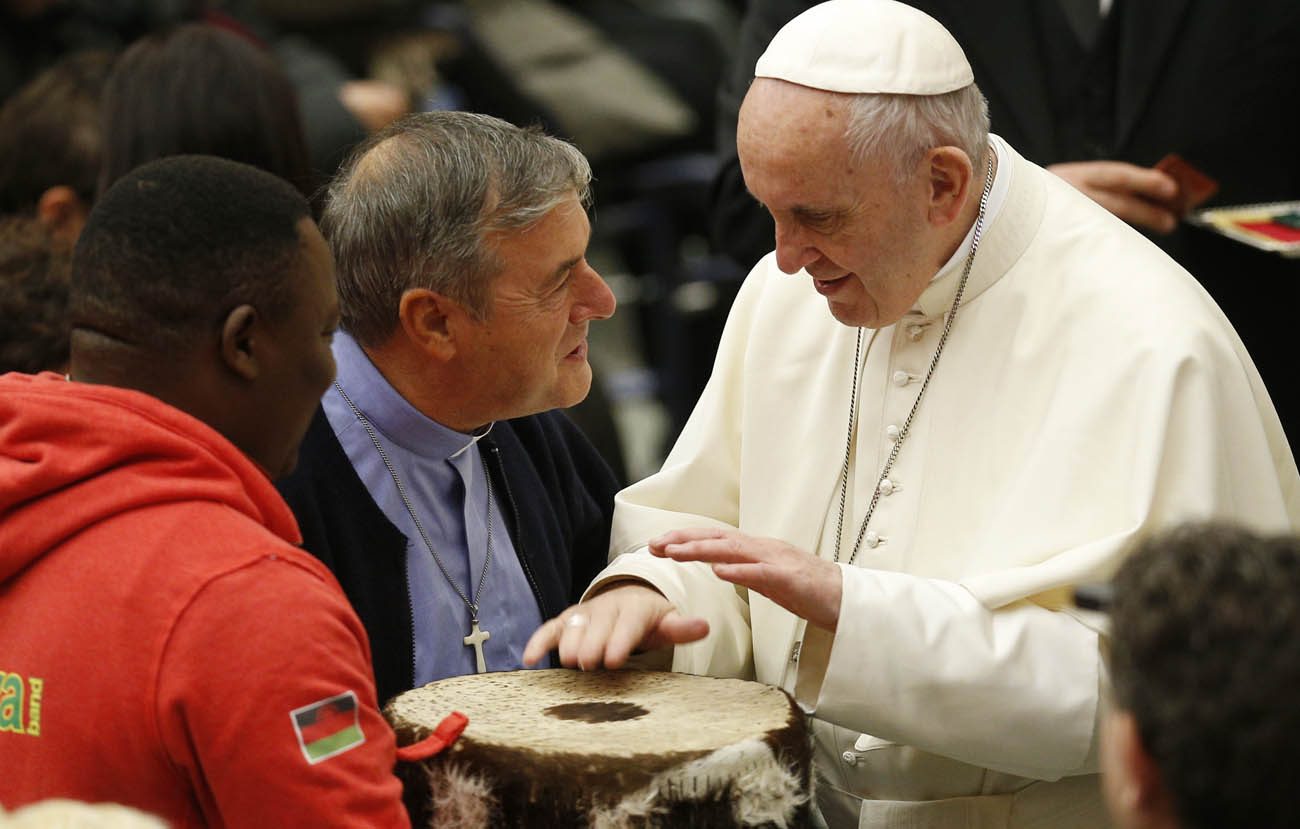 Pope Francis plays a drum held by someone in the crowd during his general audience at the Vatican Jan. 10. (CNS photo/Paul Haring)

VATICAN CITY (CNS) — The silence that precedes the opening prayer at Mass is an opportunity for Christians to commend to God the fate of the church and the world, Pope Francis said.

Departing from his prepared text at his weekly general audience Jan. 10, the pope urged priests “to observe this brief silence and not hurry.”

“I recommend this to the priests. Without this silence, we risk neglecting the reflection of the soul,” he said.

Continuing his series of audience talks on the Mass, Pope Francis spoke about the Gloria and the opening prayer.

After the encounter between “human misery and divine mercy” experienced in the penitential rite, the faithful are invited to sing the ancient hymn of praise that was sung by the angels after Christ’s birth, the pope said.

“The feelings of praise that run through the hymn,” he said, “are intertwined with the confident pleading of divine benevolence” that characterizes the entire liturgy and “establishes an opening of earth to heaven.”

After the hymn, the priest invites the assembly to pray and observes a moment of silence so that the faithful may be conscious of the fact that they are in God’s presence and formulate their petitions, the pope explained.

This silence, he said, is not just an absence of words but a time to listen “to other voices: that of our heart and, above all, the voice of the Holy Spirit.” 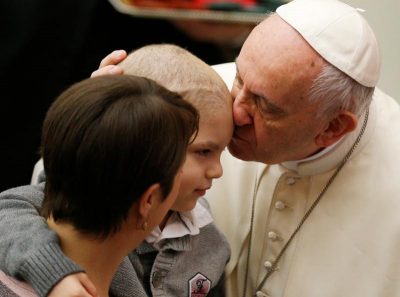 Pope Francis kisses a child while meeting the sick and disabled during his general audience at the Vatican Jan. 10. (CNS photo/Paul Haring)

“Perhaps we come from days of toil, of joy, of sorrow and we want to tell the Lord, to invoke his help, to ask that he be near us; we have family members and friends who are ill or who are going through difficult trials,” the pope said.

The priest’s posture — with hands outstretched in supplication — is also an important sign as it is an imitation of Christ with his arms open on the cross, the pope said.

“In the crucifix, we recognize the priest who offers pleasing worship to God; that is, filial obedience,” he said.

Pope Francis said that pondering the prayers and gestures, which are “rich in meaning,” Christians can make “many beautiful meditations” that can benefit their spiritual lives.

“To go back and meditate on the texts, even outside of Mass, can help us to learn how to turn to God, what to ask, which words to use,” the pope said. “May the liturgy become for all of us a true school of prayer.”

NEXT: Amid abuse allegations, Vatican names trustee to lead Sodalitium