‘Darkest Hour’ tells of a time when statesmanship mattered most 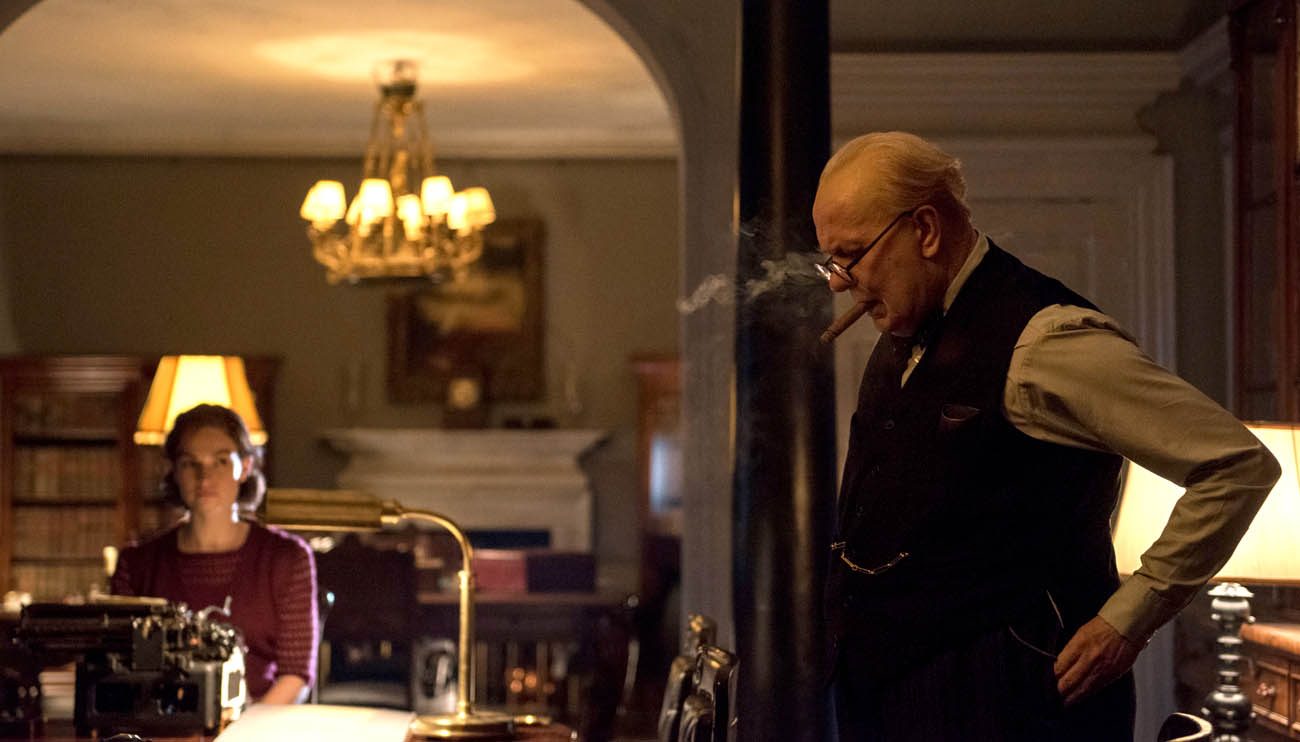 Churchill (1874-1965) was 65 years old and, it was thought, in the twilight of his political career when he was tapped to lead a wartime coalition government in May 1940. The war was going badly for the Allies, and Nazi Germany was marching into Belgium and France, threatening an invasion of Britain.

It was truly the country’s darkest hour, and director Joe Wright (“Atonement”), working from a screenplay by Anthony McCarten, offers a thrilling take on Churchill’s first three weeks in power.

The film is in some respects a companion piece to the 2017 film “Dunkirk,” taking place at the same time. While “Dunkirk” neglected politics in favor of personal stories, “Darkest Hour” goes behind the scenes, revealing how Churchill rallied a skeptical cabinet to fight the enemy rather than sue for peace, and arranged the miraculous evacuation of nearly 350,000 soldiers stranded on the French beach.

Beneath some remarkable facial prosthetics and layers of padding, Gary Oldman disappears into the role of Churchill, capturing the gait, cadence and charisma of the man. This is a warts-and-all portrayal of a decidedly quirky individual who loved his cigars and booze, was often rude and sarcastic, but who in private had moments of self-doubt.

At his side was his stalwart wife, Clementine (Kristin Scott Thomas), proud that her husband was finally getting his chance to lead, however late in life.

“When youth departs, may wisdom prove enough,” Churchill says, as he accepts the offer of King George VI (Ben Mendelsohn) to form a government. “I have nothing to offer but blood, toil, tears and sweat.”

Churchill succeeds the feckless Neville Chamberlain (Ronald Pickup), whose policy of appeasement with Nazi Germany has left Britain woefully unprepared for war. But Chamberlain enjoys the king’s favor, as does the politically ambitious Viscount Halifax (Stephen Dillane). The trio schemes to disgrace Churchill and put Halifax in power.

As Europe is overrun, Churchill is pressured to sue for peace. The idea of bowing to Adolf Hitler and the Nazis is anathema to his lifelong belief in justice and liberty.

“You cannot reason with a tiger when your head is in its mouth!” he roars at Halifax.

“Darkest Hour” proceeds at a breakneck pace as Churchill gradually convinces his colleagues to fight and rallies the nation. Although some liberties are taken with the facts (including a marvelous moment when Churchill interacts with ordinary people on the subway, which never happened), the film offers an important history lesson for young and old about a time when statesmanship mattered most.

Churchill’s greatest asset was his voice, which he used to great effect on the radio and in Parliament to inspire the nation. As he composed his stirring speeches, Churchill was aided by his secretary, Elizabeth Layton (Lily James), and his most faithful ally, the secretary of state for war — and future prime minister — Anthony Eden (Samuel West).

“We shall never surrender!” Churchill tells his parliamentary colleagues, forcing Halifax to admit, “He just mobilized the English language and sent it into battle.”

And the rest, as they say, is history.

The film contains brief scenes of wartime violence and some mature themes. The Catholic News Service classification is A-II — adults and adolescents. The Motion Picture Association of America rating is PG-13 — parents strongly cautioned. Some material may be inappropriate for children under 13.

PREVIOUS: After net neutrality, is children’s TV next in FCC’s sights?