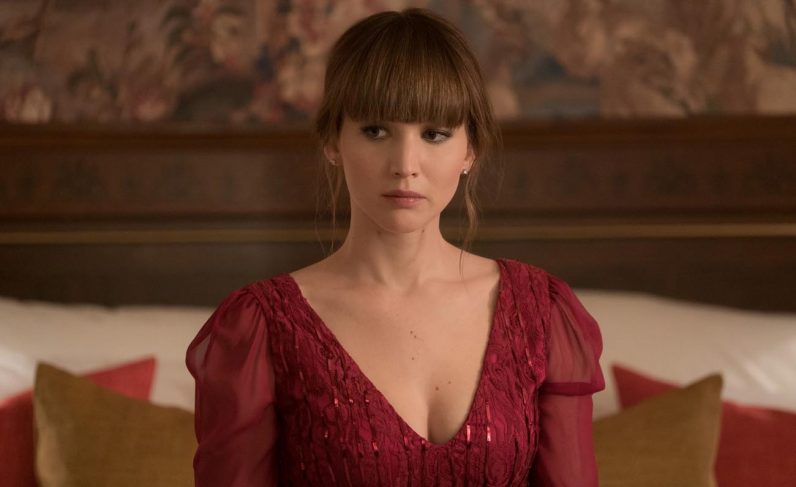 Jennifer Lawrence stars in a scene from the movie “Red Sparrow.” (CNS photo/Fox)

NEW YORK (CNS) — Not one sparrow, so we are assured on the highest authority, falls to the ground without God’s knowledge.

In the case of the potentially engaging espionage thriller “Red Sparrow” (Fox), however, such awareness may represent the downside of omniscience.

Twisty and sophisticated, though not without holes in its logic, the film might have offered relatively flavorful entertainment. But gruesome violence and gratuitous sexual content ruin its appeal.

Disabled in an onstage accident, Russian ballet star Dominika (Jennifer Lawrence) finds her future endangered once she is no longer of value to the Bolshoi. Not only her salary, but her rent and the medical care provided to her ailing mother, the audience learns, were all included in her lucrative — and now doomed — deal with the famous company.

Dominika’s sudden vulnerability opens her to recruitment by her Uncle Vanya (Matthias Schoenaerts), a highly-placed and ruthless intelligence official who wants her to train as a seductress of foreign agents. Through his influence, she’s enrolled in a school — run by jackbooted sourpuss “Matron” (Charlotte Rampling) — perversely dedicated to the purpose.

Dominika’s eventual target is veteran CIA operative Nate (Joel Edgerton) who serves as the contact for an unusually valuable Kremlin mole. But her ultimate loyalty, throughout the zigzagging plot, remains intriguingly uncertain.

Director Francis Lawrence’s adaptation of Jason Matthews’ 2013 best-seller, the first volume in a trilogy, leaves nothing to viewers’ imagination.

Over-the-top Matron — Putin’s answer, so it would seem, to “Ilsa: She-Wolf of the SS” — relentlessly drills her proteges in amorality. Later, Nate undergoes an unbearable interrogation, the length and intensity of which are wholly artistically unjustified.

Its cruelty and cynicism, alas, will keep this “Sparrow” from finding a nest with any viewer of sensibility.

The film contains excessive graphic violence, including horrific torture, strong sexual content, including explicit brutal activity and full nudity, themes of incest and vengeance, at least one use of profanity as well as numerous rough and a few crude and crass terms. The Catholic News Service classification is O — morally offensive. The Motion Picture Association of America rating is R — restricted. Under 17 requires accompanying parent or adult guardian.

NEXT: Runway to heaven: Vatican, The Met piece together faith and fashion