Girl falls for gills in ’60s period film, ‘The Shape of Water’ 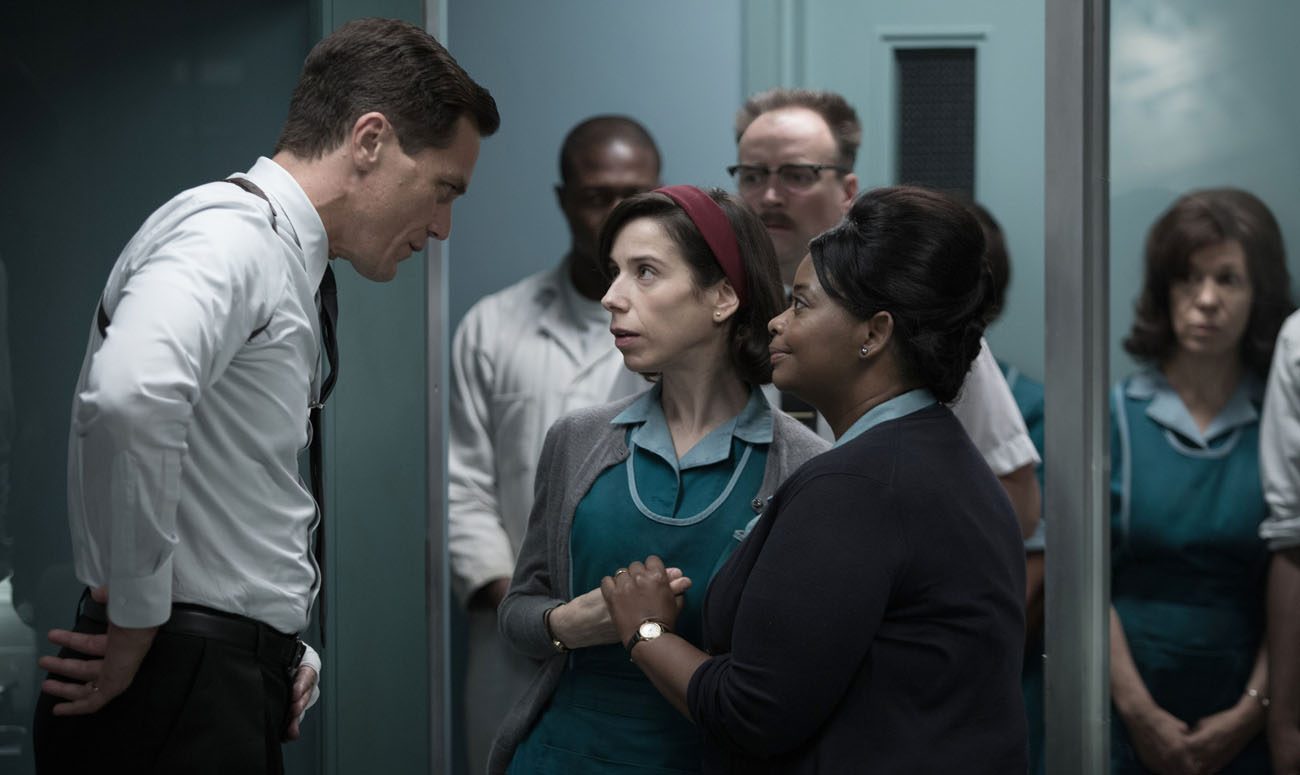 Michael Shannon, Sally Hawkins and Octavia Spencer star in a scene from the movie "The Shape of Water." (CNS photo/Fox)

NEW YORK (CNS) — Can a lovelorn yet sensuous cleaning lady in 1962 Baltimore find true love with a blue and yellow and sometimes glowing fish-man from the Amazon?

“The Shape of Water” (Fox Searchlight), which evenly splits elements of romantic fantasy, classic horror and musical nostalgia, makes the case for girl meets gills. And without Old Bay seasoning, no less.

The sexual content on display is, however, so strong and so pervasive as to make this unsuitable for the casual moviegoer, and to require a restrictive classification.

Nothing about this element of the film is intended to appear prurient or shocking. Rather, it’s a matter of sheer quantity.

Writer-director Guillermo del Toro likes to underline his points in this mix of “Beauty and the Beast” and “Creature from the Black Lagoon” — in the case of sexuality, with the cinematic equivalent of a bright, thick Magic Marker. In many other places, he makes gentler observations about the prevalence of prejudice in a variety of forms.

Sally Hawkins is Elisa, a cleaning lady at a secret government underground lair. She’s been mute since childhood as a result of having her vocal cords cut. She lives with a gay advertising illustrator, Giles (Richard Jenkins), who is fighting to stay employed and relevant. Octavia Spencer is her co-worker and friend Zelda, who translates Elisa’s sign language and is, unfortunately, the old stereotype of the sassy black friend.

Elisa is very much alone, and she and Giles, although they live above a movie theater showing wide-screen Technicolor fare, prefer to watch old musical pictures on a black-and-white TV — and practice dance steps.

Alice Faye, a screen siren of the 1940s, is their particular favorite, and as a result, she gets a lot of screen time here and is heard singing the melancholy “You’ll Never Know” (from 1943’s “Hello, Frisco, Hello”) quite a bit.

Suddenly, the way plots in these stories occur, the lab receives a tank containing the Amazonian amphibian (Doug Jones). The lab is a military facility, but is bossily ruled over by civilian Richard (Michael Shannon). He’s pugnacious, racist, in a stale marriage with a by-rote sex life, hates being stuck in Baltimore, and likes to torture the fish-man with an electric cattle prod.

Complicating matters further is the presence of a Russian spy, Robert (Michael Stuhlbarg), since the Russians also are interested in retrieving this “asset.”

Richard, though, would prefer that the lab take the amphibian with the soulful golden eyes, and cut him into pieces to see how he works, since he can breathe on both land and sea. Richard purports to know that the amphibian is an affront to God, since he’s not “made in his image.”

The tank is in an area Elisa and Zelda are assigned to clean. It gets messy in there when the amphibian attacks Richard and tears off two fingers. But Elisa retrieves the digits, although they soon turn gangrenous (It’s not one of del Toro’s subtler analogies).

She also bonds with her new equally mute fishy friend over lunches of hard-boiled eggs and big-band ballads played on a portable phonograph.

Just like in her beloved old musical pictures, she and the amphibian fall quickly into interspecies love, and she and Giles hatch a plan to spirit him out of the lab and to their apartment, where she installs him in the bathtub.

There’s also some improbable skinny-dipping when Elisa floods the bathroom. Subsequently, it turns out that her expressive sign language is a very convenient way to explain to Zelda how the sex works. This is earthy stuff, and may also constitute, for many, an instance of too much information.

Will the amphibian make it to the ocean? (Technically the Chesapeake Bay, but let’s not pick that nit.) Can his and Elisa’s love survive? And does he have godlike healing powers?

Take it away, Alice Faye: “If there is some other way to prove that I love you, I swear I don’t know how.”

All the glorious formulaic elements of a lush period romance mashed up with too many sexual references. Somehow, Alice’s warbling from beyond the grave manages to pull all of it together.

NEXT: Not enough quality films for families to make a top 10 list