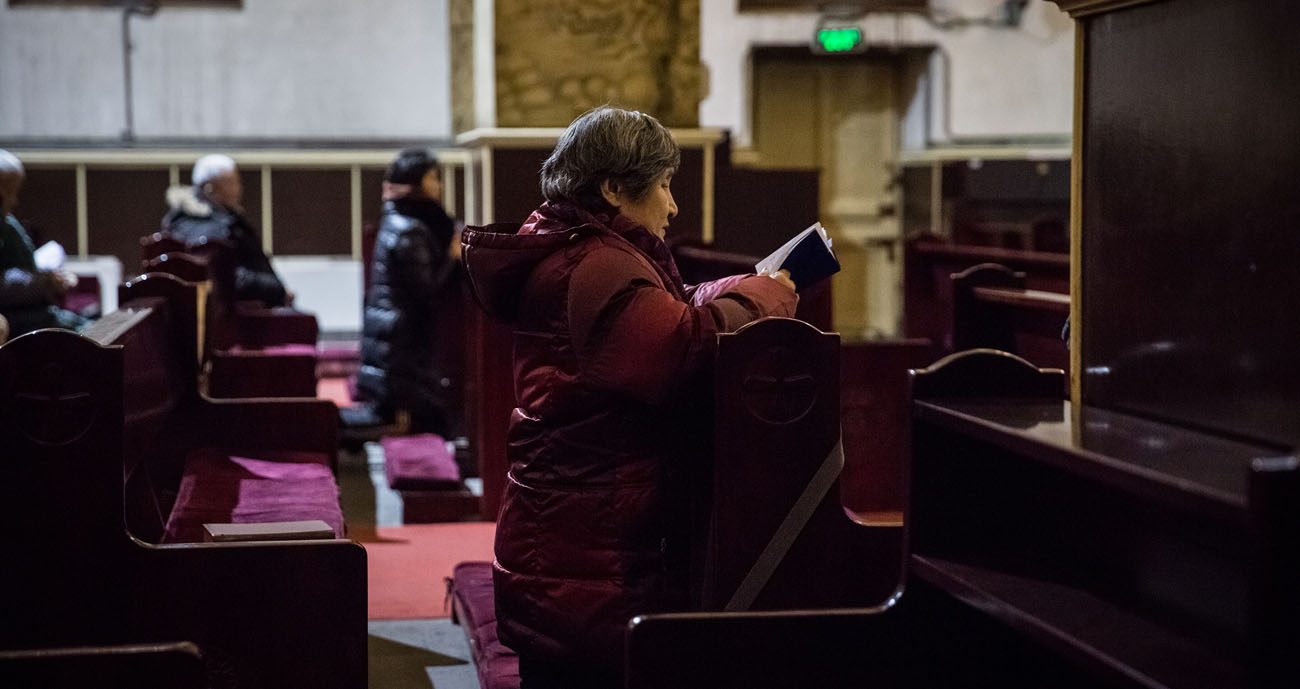 A woman prays during morning Mass Jan. 30 in the Cathedral of the Immaculate Conception in Beijing. (CNS photo/Roman Pilipey, EPA)

A priest in Hebei province who asked to remain anonymous told ucanews.com that authorities had asked clergymen in some parts of the province to post signs prohibiting minors from entering religious venues, prayer houses and other church premises.

“They also threaten churches that they cannot be used if they refuse to post the signs,” he said.

A blogger wrote that “religious venues are the third premises, following clubs and internet bars, where minors are prohibited from entering by authorities.”

Peter, a Catholic in central China, said he had seen such signs posted in churches in Xinjiang.

He told ucanews.com there are no legal grounds for officials prohibiting minors from entering religious venues, and he accused officials of violating China’s constitution.

“When minors enter internet bars, the government and police turn a blind eye. However, they are becoming very strict in prohibiting minors from entering religious venues. It is ridiculous,” he said.

Peter said the constitution clearly stipulates that citizens have religious freedom, while protection laws state that teenagers and children cannot be discriminated against because of their religious beliefs.

He said the Universal Declaration of Human Rights also stipulates that parents have the right to educate their children in accordance with their religious beliefs.

Before the regulations took effect, Ying Fuk-tsang, director of the divinity school at The Chinese University of Hong Kong, told ucanews.com that much would depend on how lower- and higher-level communist officials implement the details.

A priest identified only as Father Thomas of Henan told ucanews.com he, too, believed the regulations would be implemented differently across China, mainly depending on the relationship between the local church and the local government.

The priest said he was talking to the State Administration for Religious Affairs “to strive for space for religious freedom and the church to survive; to protect the church and staff from being attacked; and to preserve the church’s dogma.”

“All religious sites must be registered; no religious activities can be held beyond registered venues; nonregistered clergymen are forbidden to host religious liturgies; and party members and minors are prohibited from entering a church,” he said. “The living space for the church is getting less and less.”

In northeastern China, Father John of the underground Catholic community — churches that refuse to register with the government — told ucanews.com that authorities had spoken to him about the revised regulations.

“Officials do not want us to be really underground, which would mean they would lose our traces and not know where we are,” he said.

“If our dogma is not meddled with, everything will be fine. If the religious affairs bureau and the public security bureau understand us, they will not have any worries. If we are really undergoing clandestine activities, we are really a problem to them.”

But one priest who serves villages said authorities have placed greater restrictions on the church.

“Some may say that if relations between the church and law enforcement officials are good, the church may get lenient treatment,” he said. “But this is only deceiving oneself. As long as the central government requires stringent enforcement, local officials will enforce more strictly.”