A Salvadoran immigrant serves as barber, friend to Washington’s poor 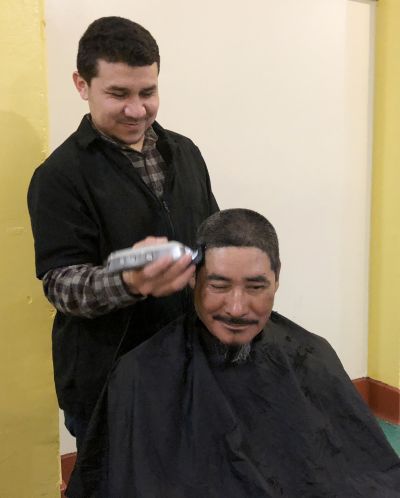 Rudy Romero cuts hair Feb. 15 at the Shrine of the Sacred Heart in Washington. He uses the skills his grandfather taught him in his native El Salvador to serve the poor and homeless by giving them a free haircut. (CNS photo/Rhina Guidos)

WASHINGTON (CNS) — Hair clippers and brushes are the tools 34-year-old Rudy Romero uses to carry out his mission to help the poor and homeless.

For the past four years, he has rushed three times a week or so from his day job over to the basement of the Shrine of the Sacred Heart in Washington to visit his clientele.

Though this hairdresser gets no tips, his payment largely comes in smiles.

“I do the best I can to help lift their spirits,” said Romero, in between clips and shaves and brushes to the nape of the neck of one of his clients, one of 10 men lined up in the basement of the Catholic church that serves the homeless and anyone else in need of a hot dinnertime meal in Washington Monday through Friday. Along with the meal, they can sign up to get a free cut from Romero.

Though most people don’t think about it, for someone who can’t afford food or shelter, a haircut is financially out of the question, said Capuchin Franciscan Father Moises Villalta, the shrine’s pastor, but a haircut can help them feel a little bit better.

“This teaches you to have patience,” said Romero, being careful as he buzzes off uneven pieces of hair from the side of a man’s head. “It’s not easy.”

Some of the clients have a variety of challenges, including addictions and mental health issues, and it can be trying to cut their hair, said Romero. He wanted to put to good use the skill he learned at age 17 from his grandfather, who used to cut hair in his native El Salvador.

“My grandfather used to cut hair in his free time,” he told Catholic News Service. “So now I’ve taken his place.”

He gently brushed swaths of recently shaved salt and pepper hair that had fallen on the barber’s gown draped around the client, and turned him around to see if he looked happy. If he weren’t an active member of the Catholic Church, it would be a difficult task, Romero said, but he keeps in mind the importance of works of mercy, of helping and being with the poor.

Before he became their official hairdresser, he volunteered for years serving the food many of his clients receive before the haircut or cleaning the makeshift dining room where they gather.

“He’s very dedicated,” said Father Villalta. “He wants to help them, he wants them to feel clean and to give them dignity.”

Romero said he does his best to carry out the clients’ wishes and gives them any haircut they want. Some want their entire hair gone, but many opt for a cut that’s easy to maintain on the streets. Some of them recognize him and greet him while he’s walking around the bustling neighborhood, remembering he’s the one who helps them stay clean.

“It makes them happy” to get a cut and that, in turn, makes him glad, to ease at least a little bit of the difficulties they face, he said.

PREVIOUS: Franciscan Brothers of Peace, others walk alongside victims of torture