Franciscan Brothers of Peace, others walk alongside victims of torture 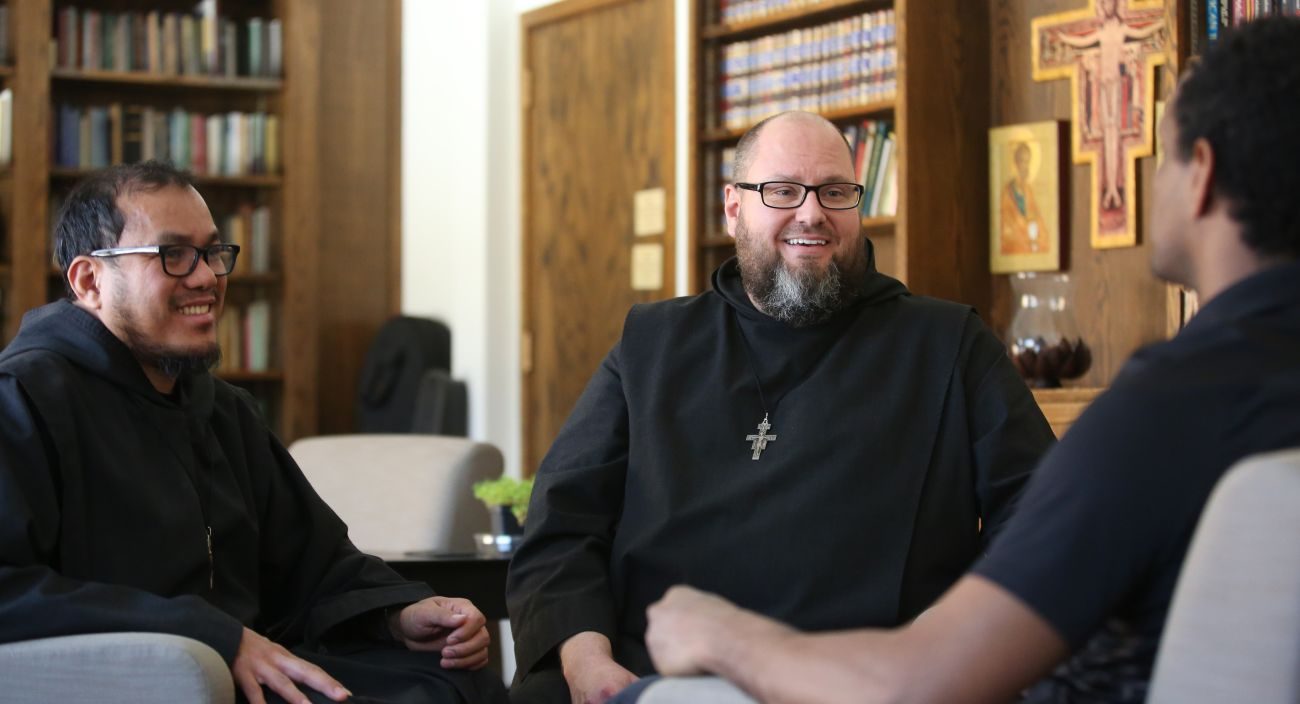 Franciscan Brothers of Peace Antonio Pagba and Conrad Richardson talk with "David" at the friary in St. Paul, Minn., in this undated photo. The brothers have been helping victims of torture since the mid-1990s. (CNS photo/Dave Hrbacek, The Catholic Spirit)

ST. PAUL, Minn. (CNS) — Throughout any given week, the Franciscan Brothers of Peace hear the rhythmic plucking of the “krar” — a lyrelike instrument from east Africa — in their St. Paul friary.

For “David,” playing the krar is just one aspect of his life at the friary that connects him to the East African country he fled to escape government persecution after a forced stint in the military. To help him feel more at home, the brothers converted a downstairs storage area into a music studio.

In an interview with The Catholic Spirit, newspaper of the Archdiocese of St. Paul and Minneapolis, he asked that the paper omit his real name and other details to protect his identity.

When David, who is Coptic Orthodox, arrived at the friary as a temporary resident almost two years ago, coordinated through the Twin Cities-based Center for Victims of Torture, his teeth were missing — evidence of the brutality he endured for 13 months in an African prison.

He has since acquired dentures that fill his bright smile when he speaks of his family back home. He doesn’t disclose their names and ages because he fears for their lives.

With no official judiciary or free press, David likens the political climate of his home country to that of North Korea, but without a constitution. Each day, the brothers share in David’s prayers for asylum and reunification with his family.

In the meantime, he works full time at a big-box store and attends a weekly Bible study at his church. He’s in the process of finding a place of his own, and he said he has found solace living with the brothers, who’ve given him advice.

“God bless the brothers,” he said, “and the Catholic Church.”

The Center for Victims of Torture, a St. Paul nonprofit, is recognized internationally as a leader in helping victims of torture through an interdisciplinary approach of medical care, psychotherapy and social services with hopes they’ll become productive members of society, said Curt Goering, its executive director.

“When they come to us here, they have deep, physical and emotional wounds, having endured the worst that any human being can possibly endure,” he said, listing the types of torture the center’s clients have undergone: being burned with cigarettes, hung upside down, electrically shocked, having their teeth and fingernails ripped out, sleep deprivation, subjection to hot and cold extremes, mock executions, forced to hear their loved ones being tortured and forced to torture their own family members.

The center’s work began in the 1980s when Rudy Perpich Jr., a volunteer with Amnesty International, asked his father, Rudy Perpich, then the governor of Minnesota and a Catholic, how he was advocating for human rights. What followed was a rehabilitation center for survivors of torture in St. Paul. The center also does training, research and advocacy.

Its outpatient clinic is a large Victorian home in a residential neighborhood. It was specially designed to help promote survivors’ healing: no bright lights that might trigger memories of interrogation rooms; only large windows with natural light. There are no square rooms or exits that aren’t immediately available; only rounded hallways.

But the center’s high rehabilitation improvement rates among survivors give him hope. Last year, the center helped around 400 individuals of 40 different nationalities.

“They’re fleeing torture and terror and the atrocities of war,” Goering said, adding that people are most often persecuted because of their faith. “With the right kind of support, people can and do heal from their wounds, and they do become productive citizens and contribute to society again. At CVT, we see this happen all the time.”

The Franciscan Brothers of Peace have housed male international victims of torture since the 1990s — about 70 to date, said Brother Conrad Richardson, who serves as the leader of the brothers’ community.

Describing their apostolate as “doing whatever needs to be done,” Brother Richardson said the 12 brothers provide room and board and fulfill other tangible needs — climate-appropriate clothing, food, monthly mass transit passes and phone cards.

Multicultural artwork hangs on the walls of their friary, and their kitchen is stocked with ethnic foods to help give their guests a sense of home.

“All are received as Christ,” Brother Richardson said. “Residents who live here, they know that they’re welcome to join us for any meals we have and even to join us in prayer as they like.”

The men come to the U.S. through various means. A former resident, Brother Richardson said, was a stowaway on a ship and found enough food and water to survive the journey. Another man from Iraq had served in a high-ranking military position under Saddam Hussein. He escaped through bribery.

The information the brothers garner about their guests is confidential; through the men’s social workers and lawyers, the brothers only know pertinent information and what the men are willing to share, per the Center for Victims of Torture’s policies.

Knowing at least some English, most of the men were well educated and held good jobs in their home countries, giving them the wherewithal to help mobilize people, thus making them targets of their oppressive governments.

“They might be emptying bed pans at Regions Hospital, and they’ve performed brain surgery before,” Brother Richardson said. “But they’re doing it because they know that there is opportunity here, and you do have to start somewhere, and they’re just grateful for the opportunity.”

In addition to David, the brothers are currently housing an Ethiopian and a Cameroonian, who help around the friary a few hours each week.

Residents typically stay for about two years, but because obtaining a work permit takes more time now than when the brothers began their ministry, the men often stay longer. The brothers accommodate an average of about three men at a time; the most they’ve housed was seven at once.

While searching for employment, the men are encouraged to volunteer, which gives them skills and experience working with people in another culture, Brother Richardson explained.

Once they find employment, they begin saving money to send to their families back home, he added, noting that the men’s families are often targeted. They also start saving money for housing, with the brothers helping them find affordable rent. Benefactors provide furniture and household items that the brothers give to the men to furnish their new residences. The brothers also operate an emergency food shelf that the residents may use after they leave the friary.

Complementing the brothers’ ministry is Sarah’s Oasis, a ministry of the Sisters of St. Joseph of Carondelet in St. Paul. It serves female victims of torture. Last year, more than two dozen Karenni refugees from Myanmar joined the Church at St. Bernard in St. Paul.

The first Karenni refugees came to the parish around 2010, said Hsawreh Sharpoehtay, 31, the parish’s refugee liaison. And all the adult refugees are victims of torture.

Brother Richardson encourages Catholics to become aware of why refugees are leaving their countries, which should give Americans a sense of pride and gratitude, he said.

“Try to put yourself in their shoes as an American with what we have,” he said. “Could we imagine wanting to go to another country? But what if we lived in one where we couldn’t go to Mass?

“We are so blessed,” he continued. “And if we are to be a people that close ourselves off from others who are treated inhumanely, then what a travesty.”

NEXT: A Salvadoran immigrant serves as barber, friend to Washington’s poor