Bishop listens to DACA recipients’ stories, says: ‘We are with you’ 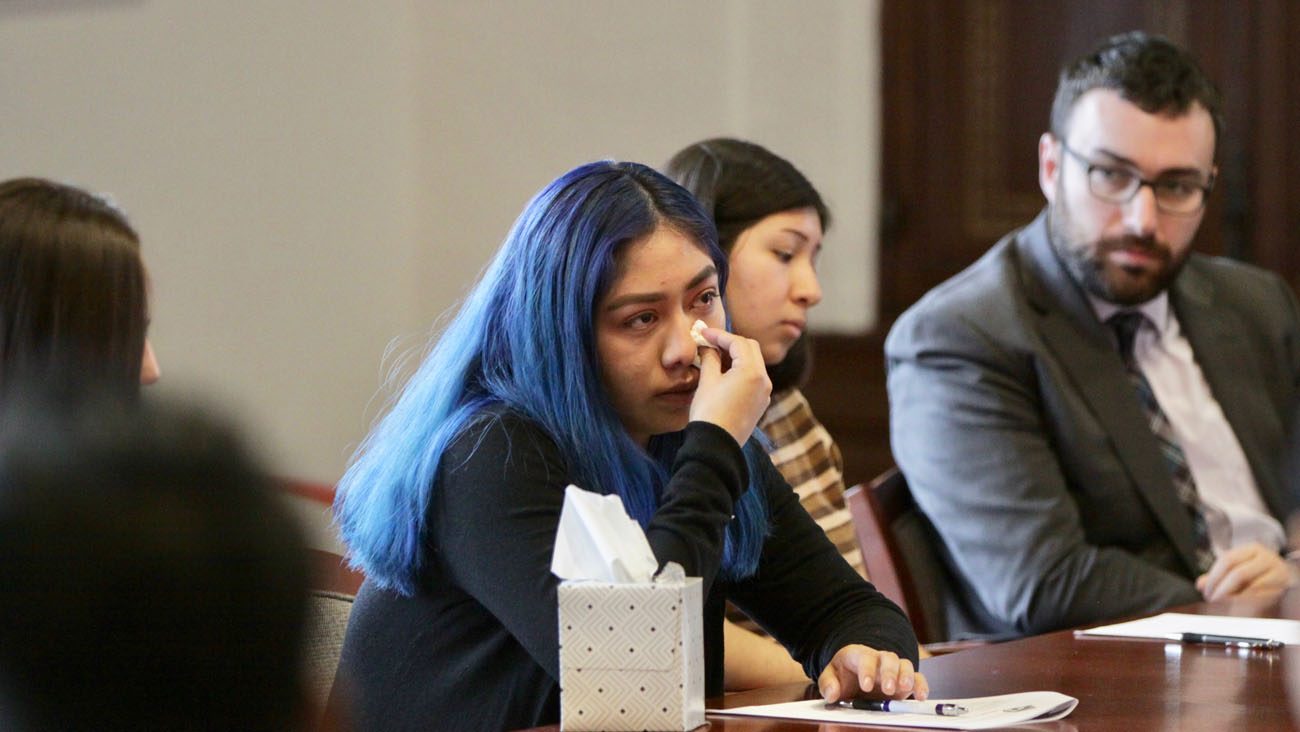 Evelyn Marquez Auza, a recipient of the Deferred Action for Childhood Arrivals, or DACA, wipes away tears as she tells her story as a "Dreamer" Feb. 23 in Camden, N.J., at a listening session with Bishop Dennis J. Sullivan of Camden. (CNS photo/Mike Walsh, Catholic Star Herald)

CAMDEN, N.J. (CNS) — Bishop Dennis J. Sullivan of Camden sat at a round table as 16 individuals made their way into the conference room.

Once all of his guests arrived, he made his way around the room, asking each individual’s name, shaking hands, welcoming them and thanking them for joining.

All were under age 30 and came to the United States as babies, toddlers or children. Currently, as “Dreamers” — those with DACA status — they all are now subject to deportation because the Trump administration announced the end of the Deferred Action for Childhood Arrivals program and directed Congress to save it.

After taking their seats, they turned to Bishop Sullivan, and his voice rang loud and clear as he addressed the room.

He opened the floor to the Dreamers, welcoming them to share their stories with him and the others present: Catholic Charities staff, clergy, diocesan staff and the media. 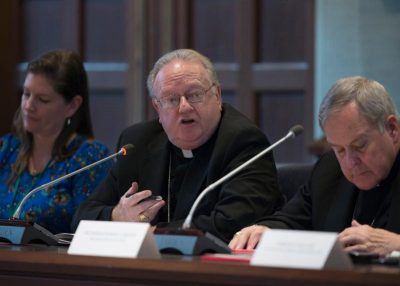 Bishop Dennis J. Sullivan of Camden, N.J., is seen during a meeting to discuss Catholic education at the headquarters of U.S. Conference of Catholic Bishops in Washington Jan. 17. (CNS photo/Tyler Orsburn)

The Dreamers were not shy in recounting their experiences, their hopes, their struggles — and their dreams. “Dreamers” comes from the proposed DREAM Act — the Development, Relief, and Education for Alien Minors Act — which many have urged Congress to pass to give DACA recipients a path to citizenship.

A 27-year-old woman named Magali (she used only her first name) was seated next to Bishop Sullivan and kicked off the conversation.

“My parents and I came to this country from Mexico City when I was 3 years old,” she said. “In Mexico, we lived with my grandparents on a second floor of an apartment building with 20 other people … and life was hard, the poverty was unimaginable.”

But, growing up in America, she was able to work, save her money and eventually study parish administration at the College of St. Elizabeth in Morristown. The married mother now works as a parish secretary and hopes to someday study law.

“I have two children — ages 2 and 10,” she explained. “And my kids don’t know that I might be deported. They think everything is fine, and I know that I need to keep a calm face for my children. … I just can’t imagine a future without them.”

Bishop Sullivan nodded as she explained her story, commending her spirit, her selflessness, her love of family, reminding her: “That’s critical for our society to have families like yours. And like so many others, your parents didn’t come here because they wanted to, they came here because they had to.”

Luis Botello, dressed in a suit and tie, stated that he has no memory of coming to the United States from Mexico, as did many others. Now, he works as an electrical engineer, while also training in the academy to become a volunteer firefighter.

“I’m supposed to graduate in June from the academy,” he said. “If I get deported, if I lose that, I lose everything. I’m an American first, this is the only place I know, the only place I’ve ever known. Everything and everyone I know and I love is here. I consider myself an American in every way, except on a piece of paper.”

The bishop responded: “You, like thousands of others, you’re contributing to our country. You’re not living off of it. You work hard, you help others, you’re a great neighbor. I hear that from you. And you — and everyone else here — is as much of an American as I am.”

Some recounted their first memories of living in Mexico.

One young woman, Evelyn Marquez Auza, fought through tears as she explained her first memory: receiving a diagnosis of a life-threatening illness as a toddler.

“My father worked so hard,” she said. “But the medications were too expensive. My parents had to choose between medications for me and food for our family.”

She came to America, where she attended school, learned English and worked tirelessly to save up enough money to attend college.

“I almost had enough saved to go to college, when I found out that my father was really sick. He couldn’t afford medical bills, so we used all the money I had to pay for his medical expenses.”

Ultimately, she lost her father. But, wiping away tears and straightening her posture, she said: “I still hear his words in my head, pushing me to work hard, to try my best no matter what, to get a good education. And that’s what I’ve been doing and will continue to do.

“As early as grade school, people have told me ‘go back to Mexico,’ or that ‘you’ll never get into college, you’re an alien.’ I’ve heard ‘you’ll never get a career, you’ll probably just have a bunch of kids and never get married like all Latinos.’ But these words never discouraged me. They gave me motivation. Even now.”

For others their first memories from the countries from where they came were of abuse, violence, witnessing deaths of family members and impoverished living conditions — but it became clear that through these struggles and tragedies came resilience and determination.

President Barack Obama created DACA by executive order in 2012. In September, President Donald Trump announced an end to the program. He told Congress to pass a measure to keep it in place by March 5, but lawmakers have been deadlocked over a solution.

In the meantime, two federal judges ruled that the Trump administration must continue to allow current DACA beneficiaries to renew their status. On Feb. 26, the U.S. Supreme Court rejected a Trump administration appeal of one of those rulings from California. The court said the appeal will have to follow the usual process and be heard by the 9th U.S. Circuit Court of Appeals, based in San Francisco.

So for now, Congress has more time to work out a solution but Catholic leaders and other advocates for the Dreamers will continue to push lawmakers to come up with a solution for the 800,000 or so Dreamers.

Like his brother bishops, Bishop Sullivan urged Catholics in his diocese to participate in a national call-in day Feb. 26 to members of Congress urging them to act now to save DACA.

“It is both our moral duty and in our nation’s best interest to protect Dreamers,” Bishop Sullivan stated. “The plight of these Dreamers is not a matter of politics, but a matter of human rights. Our actions should be an example of how we live our faith as Catholics.”

Before Bishop Sullivan ended the meeting with a closing prayer, one young woman asked if she could add one more comment.

“Hearing you support us — it makes me feel that we matter, that we’re humans too,” she said, tearing up. “Nobody has ever taken the time to listen to us, what we’ve been through. And knowing that you’re standing next to us, and making our voices be heard … you were the first to ever do this. And we thank you.”

McCusker writes for the Catholic Star Herald, newspaper of the Diocese of Camden.

NEXT: People from all walks of life wait hours to pay respects to Rev. Graham