People from all walks of life wait hours to pay respects to Rev. Graham 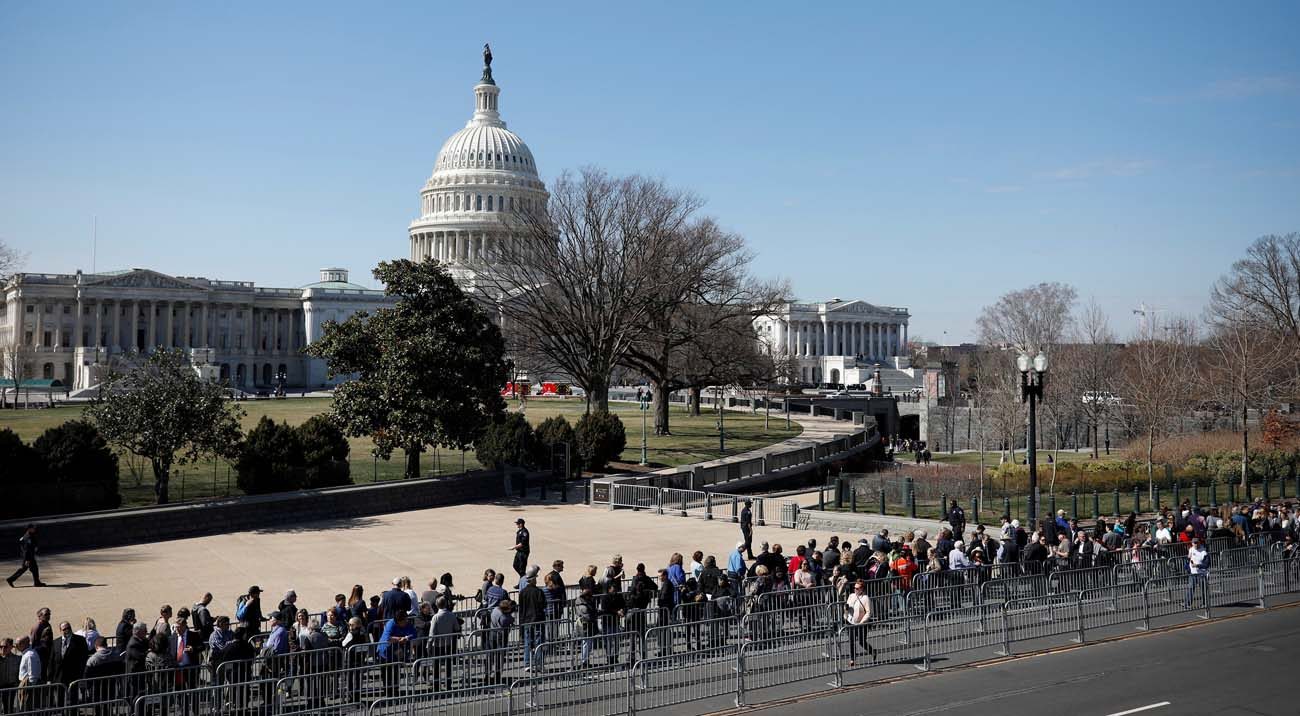 WASHINGTON (CNS) — After the politicians held their morning service Feb. 28, it took members of the public nearly three hours in the mid-afternoon to see the Rev. Billy Graham lying in honor at the U.S. Capitol.

It would have been a shorter wait, an usher apologetically assured a group at the Capitol Visitor Center, but the Supreme Court justices decided to make their own visit, so everyone had to be cleared out of the Rotunda while they were there.

Several thousand people quietly and patiently endured a snaking line that began on First Street and continued with two more lines inside the Capitol before ushers guided them to a stairway into the Rotunda, where Rev. Graham’s plywood coffin, brightly illuminated by TV lights, rested on a catafalque. The world famous Baptist preacher died Feb. 21 at age 99.

Here are some things one learns on such a pilgrimage:

If anyone’s legacy is accurately reflected in the people who attend a visitation, then Rev. Graham’s is far more diverse than the old stereotype of white Protestants who attended his American crusades. He was an evangelist who reached people worldwide, and in death drew mourners worldwide.

Just a small selection of people in line included two Dominican brothers from Washington; former Virginia Congressman Frank Wolf; the Rev. Natt Miller, a native of Liberia and a minister with Christian Interdenominational Assemblies; and folks of all ages and races. One woman, who had attended Rev. Graham’s first crusade in Los Angeles in 1949, had flown in from California.

No one was there just to gawk at a coffin of a famous person. If one struck up a conversation, one learned that the common thread was that these pilgrims had not known Rev. Graham personally, but credited him for their personal salvation and continued relationship with Jesus Christ. These included a woman who had attended Rev. Graham’s first crusade in Los Angeles in 1949. 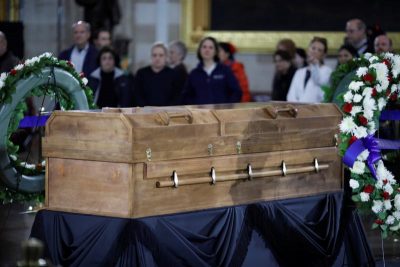 The casket of the Rev. Billy Graham is seen at the U.S. Capitol in Washington Feb. 28. (CNS photo/Aaron P. Bernstein, Reuters)

Shari — everyone was on a first-name-only basis at this gathering — had driven from Cleveland, picking up her daughter and grandson en route in Wheeling, West Virginia.

“I’m here because I got saved because of Billy Graham,” she told Catholic News Service. “It was in 1973. I’d gone to one of Billy’s films, ‘Time to Run,’ that was being shown by Campus Crusade for Christ. It changed my life.”

Dave, from Arlington, Virginia, said he’d found salvation at age 9, also in 1973, when his grandmother sat him down before a televised Rev. Graham crusade. “That’s when I knew. That’s when I decided,” he said.

Lenny, also from Cleveland, attended a crusade there in 1973 and at Rev. Graham’s next Cleveland crusade in 1994, was an eager volunteer.

There also was a melancholy sense of an era that had long passed. Rev. Graham had been the last of a triumvirate of national religious leaders that included Archbishop Fulton J. Sheen and Norman Vincent Peale. While each grew to national fame on TV in the 1950s during the peak of the Cold War, when the embrace of Christian faith was considered an effective opposition to the encroach of the Soviet Union, they also were mainstream cultural icons.

Shari said she had shown her daughter a YouTube video of Rev. Graham’s interview with Woody Allen in Allen’s 1969 CBS special. Allen, an agnostic, attempted to debate Rev. Graham about the existence of God, in what is now considered one of the more surreal moments in the history of broadcasting.

“No one does that anymore,” Shari observed. “Sitting down and talking respectfully to each other. You don’t see that today.”

For all the published tut-tutting about whether it was appropriate for a religious leader to be honored with the same ritual afforded to deceased presidents at the Capitol, the setting provided a dignified, and efficiently large enough, setting for the thousands who wanted to pay their respects.

Finally, in the hushed Rotunda, people formed two rings. The outer ring walked around and broke into lines to shake hands with Graham’s family.

There also was a standing inner ring, three to four deep at all times and constantly replenishing.

Every single person in that ring had folded hands, head bowed, eyes closed. They were doing what they’d come there to do, which was to pray at Rev. Graham’s coffin as they said farewell. It was Billy’s final altar call, and for the moment, the Rotunda became his cathedral.

“Thank y’all for coming,” grandson Roy Graham said as he shook each hand.

PREVIOUS: Bishop listens to DACA recipients’ stories, says: ‘We are with you’