Dallas Catholics mourn two of their own who died in N.Y. helicopter crash 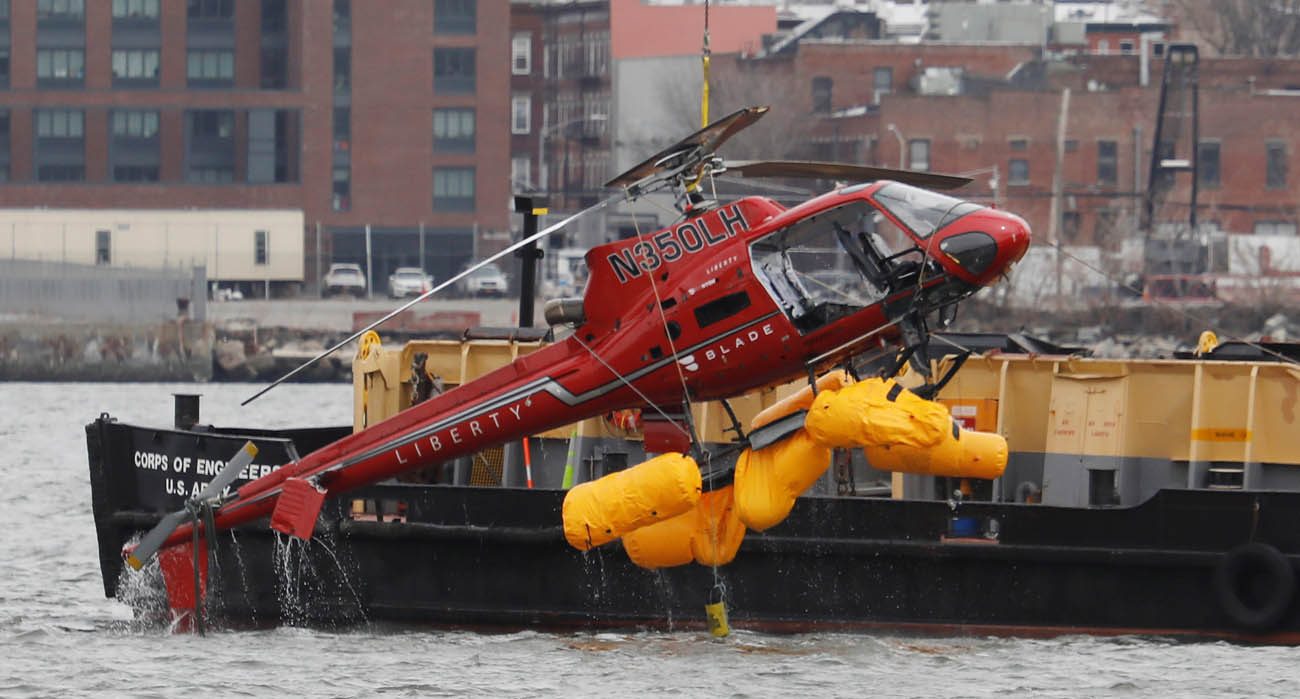 The wreckage of a chartered helicopter that crashed into the East River in the Manhattan section of New York City March 11 is hoisted from the water March 12. Longtime friends Trevor Cadigan, and Brian McDaniel, both 2010 graduates of Bishop Lynch High School in Dallas, were two of the five people killed in the crash. (CNS photo/Shannon Stapleton, Reuters)

DALLAS (CNS) — What was intended as a New York City sightseeing adventure and weekend reunion of two longtime friends March 11 ended in tragedy for two alums of a Catholic high school in Dallas.

Bishop Lynch High School 2010 graduates Trevor Cadigan, a journalist, and Brian McDaniel, a Dallas firefighter, died with three other passengers when the chartered helicopter in which they were riding crashed into the East River in Manhattan March 11. Both men were 26 years old.

Pilot Richard Vance, the lone survivor, sent out a distress call before the helicopter plunged into the river and flipped over, trapping the passengers, who were wearing harnesses. The medical examiner ruled March 13 that the five died of drowning.

The three other victims were Carla Vallejos Blanco, 29, a tourist from Argentina; Tristan Hill, 29, who worked for Sightsy, a sightseeing tour company; and Daniel Thompson, 34, board president of the Young New Yorkers’ Chorus.

Trevor Cadigan played football for Bishop Lynch Friars and participated in the student council and power-lifting, among other activities.

He interned at WFAA-TV, where his father is production manager.

“Trevor had a great sense of humor and a huge personality,” Bishop Lynch president Chris Rebuck said. “Brian was a very hard worker. They both had recently found their place in what they were called to do.”

With Bishop Lynch on spring break, a somber scene unfolded on the almost-empty campus March 12 as longtime Lynch teacher Michele Longoria, the student communications adviser, struggled not to cry openly as she recalled Cadigan as a creative, endearing and energetic student.

“The best thing that I can do to honor Trevor is to make sure my students hold themselves accountable, and make sure they fact-check and write the lead the right way,” said Longoria, whose 23 years of teaching at Bishop Lynch includes instructing three broadcast journalism levels.

“We become families not only in our faith and academics, but in everything we do. When the parents trust us, we take that responsibility seriously,” she told The Texas Catholic, newspaper of the Diocese of Dallas. “Trevor was just a good, good man.”

She said that Cadigan delighted the school community with a biweekly news feature he hosted that addressed topics including dating.

Brad Ramsey, WFAA-TV president and general manager, issued a statement March 12: “The entire WFAA family is heartbroken by the sudden and tragic loss of Trevor Cadigan. We would like to thank the many friends and former employees of WFAA who have reached out to offer your condolences and support.

“Our thoughts and prayers are with all of Trevor’s family and friends, and with the families of all of the victims of (the March 11) tragic accident.”

Andrew Vidales, who served as McDaniel’s cycling coach, said that the challenges of training brought coach and rider close.

“The conditioning is beyond what other sports entail — the sprints, the hills,” said Vidales, who works in safety and security for Bishop Lynch. “Brian was very cheerful and optimistic.”

“We as a community will regroup and support the families,” he said.

McDaniel, a Dallas firefighter for the past two years, was visiting Cadigan in New York at the time of the accident.

“Hearts are heavy with grief as we not only try to come to grips with his loss departmentally; but to also be there in every way that we can for his family,” Dallas Fire Department spokesman Jason Evans said in a statement.

McDaniel played baseball and football and cycled for the Friars’ club.

“Trevor was the ‘funny guy’ at school who entertained everyone,” said Zihlman, now Lynch’s director of donor and strategic relations. “Brian also was well-liked and a good athlete.”

The passengers who died in the crash reportedly had chartered the Liberty Helicopters chopper for a private photo shoot.

Experts from the National Transportation Safety Board began examining the helicopter March 12 in an attempt to determine the cause of the crash, NTSB member Bella Dinh-Zarr told CNN.

Harasta is on the staff of The Texas Catholic, newspaper of the Diocese of Dallas.