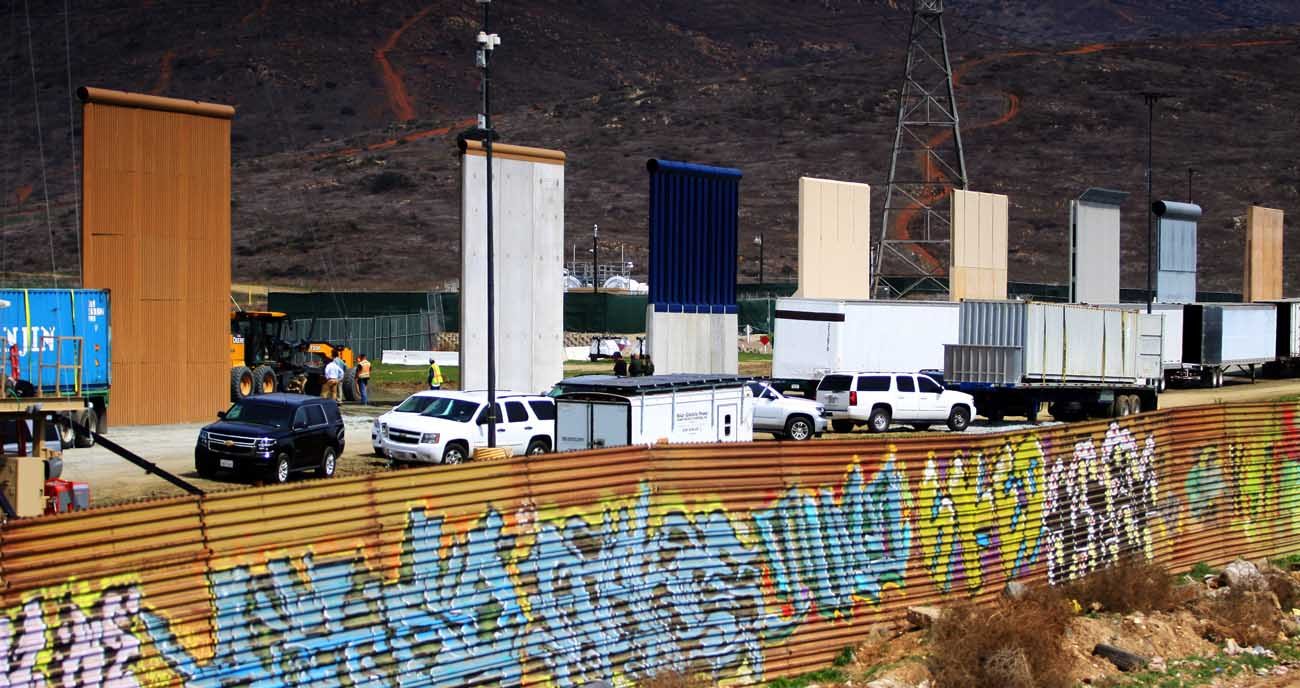 UPDATED – WASHINGTON (CNS) — On the day that marked the fifth anniversary of the election of a pope who has called on others to “build bridges, not walls,” the president of the United States toured Southern California to look at prototypes for a wall he promised to build on the border with Mexico.

“The state of California is begging us to build walls in certain areas. They won’t tell you that,” President Donald Trump said March 13 while on tour to visit possible models of the wall in San Diego.

The president said he was looking for a wall that authorities can see through and that would deter would-be crossers from climbing it.

The wall was a major campaign promise for the Republican president, who said that Mexico would pay for the structure expected to cost billions. The government of Mexico has scoffed at the idea of paying for it so the president instead has been asking Congress to approve $18 billion in taxpayer money to fund the initial phase, saying it is a security issue.

“If you don’t have a wall system, we’re not going to have a country,” Trump said during the visit.

Supporters of the structure and of the president chanted near the site of the visit, but protesters, too, made their views known. Many gathered at Our Lady of Mount Carmel Catholic Church in San Ysidro near the border, according to the Los Angeles Times.

Others, such as Bishop Robert W. McElroy of San Diego, issued a statement saying the wall is a symbol of division. He had different words for the structure that the president called “beautiful.”

“It is a sad day for our country when we trade the majestic, hope-filled symbolism of the Statue of Liberty for an ineffective and grotesque wall, which both displays and inflames the ethnic and cultural divisions that have long been the underside of our national history,” Bishop McElroy said after the president’s tour of the prototypes.

“Our faith is in the God who is the Father of us all, and who urges us to see Jesus himself in the immigrants and refugees who seek safety and freedom,” the bishop said.

Many Catholic groups, including the U.S. Conference of Catholic Bishops and Pope Francis, have opposed the wall.

“I am disheartened that the president has prioritized building a wall on our border with Mexico,” Bishop Joe S. Vasquez of Austin, Texas, chairman of the bishops’ Committee of Migration, said in January 2017. “This action will put immigrant lives needlessly in harm’s way. Construction of such a wall will only make migrants, especially vulnerable women and children, more susceptible to traffickers and smugglers.”

“The wall is a campaign promise, but not a realistic solution to the challenge of irregular migration,” said Kevin Appleby, senior director of international migration policy for New York-based Center for Migration Studies. “It is a proposal looking for a problem, as border crossings are down considerably and should continue to fall into the future.”

In January, a group of Latino bishops from the U.S. visited Israel’s separation wall, which divides East and West Jerusalem, as well as Palestinian, Jewish and Muslim communities.

Trump has said he has based his idea for the Mexico border wall after the one in Israel. Some of the prototypes, a high cement barrier, resemble the separation wall, which, on the West Jerusalem side, has a mural satirizing Trump saying, “I’m going to build you a brother,” referring to the proposed wall with Mexico.

During the visit to the wall in Israel, the Auxiliary Bishop Eusebio Elizondo of Seattle said Jan. 21 that “walls can’t bring any positive aspect to any country. The image is very negative. ‘I am keeping you out of my life.’ … It creates more resentment and isolation. It makes it impossible to see the other.”

Auxiliary Bishop J. Arturo Cepeda of Detroit, who also was present during the Holy Land visit, said a wall prevents people from “seeing the other as a human person.”

“If we are not able to see the other as a human person, we are missing the point of who we are,” Bishop Cepeda said, explaining that the U.S. was experiencing similar challenges.  “The message is that this is about people, it is a human crisis … the challenge is what is the most effective way to communicate this. This is a human crisis. In our USA, we are facing a very, very hard human crisis, which is our immigrants. It is a terrible crisis.”

Days before the president’s visit to California, Bishop Mark J. Seitz of El Paso, Texas, spoke on Capitol Hill opposing funding for the wall and said politicians need to stop causing divisions between communities that live on the border.

He said politicians need to stop destroying communities by painting the border as a place of conflict when it had been, in the past, a place for families to be united and for communities from two different countries to encounter one another. Last year, he issued a pastoral letter saying that the country’s security cannot be used as a “pretext to build walls and shut the door to migrants and refugees.”

“I am pastor of a diocese divided by walls and checkpoints that separate individuals from loved ones. I am bishop of a flock frightened by the flashing lights of police cars in the rearview mirror, who wonder if this family outing or that drive home from work will be the last,” he wrote in the pastoral letter issued in July 2017.

“I am (a) spiritual father to thousands of Border Patrol and ICE agents, who put their lives on the line to stem the flow of weapons and drugs and those who carry them,” Bishop Seitz added. “Many agents are troubled in conscience by divisive political rhetoric and new edicts coming from Washington, D.C.”

NEXT: Dallas Catholics mourn two of their own who died in N.Y. helicopter crash