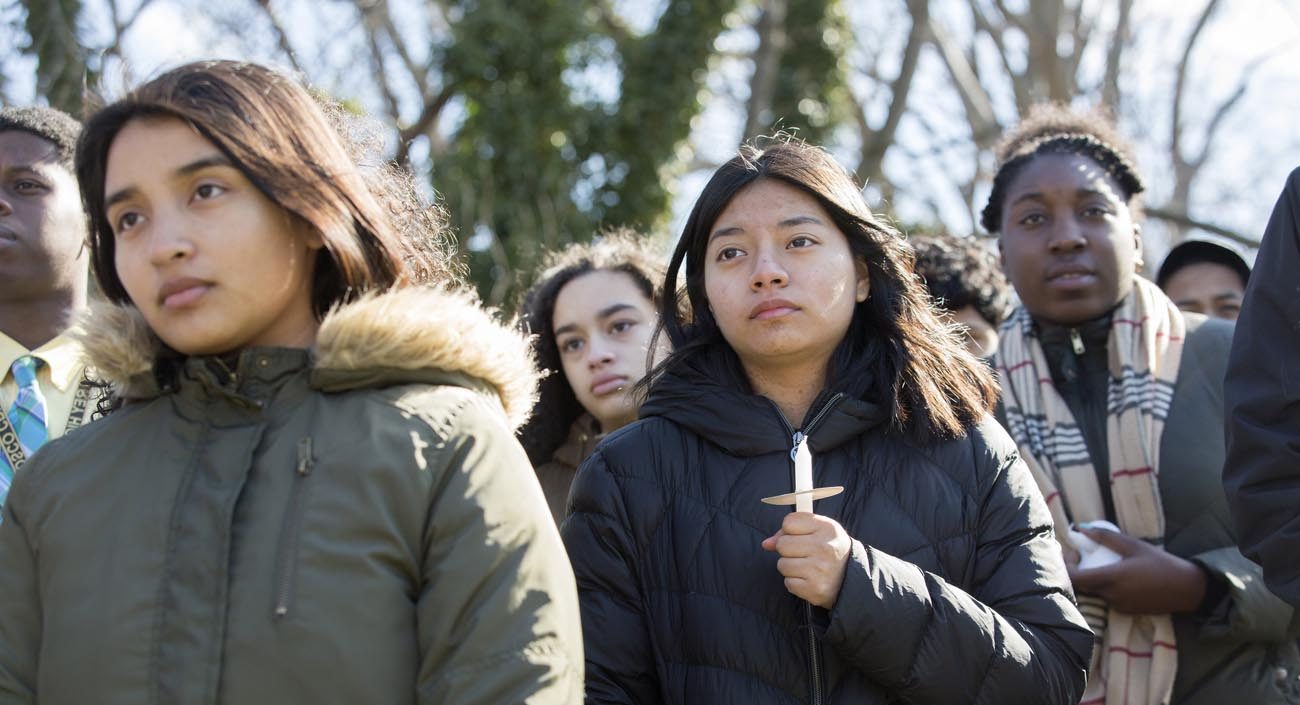 Students from the sophomore class at Don Bosco Cristo Rey High School in Takoma Park, Md., participate in the National School Walkout on March 14. During the walkout students prayed 17 Hail Marys and released 17 balloons, one for each of the people killed in the Feb. 14 school shooting in Parkland, Fla. (CNS photo/Jaclyn Lippelmann, Catholic Standard)

TAKOMA PARK, Md. (CNS) — One month after the deadly shooting in Parkland, Florida, students at Catholic schools in the Archdiocese of Washington joined thousands of students throughout the country in the National School Walkout March 14 to honor the 17 victims of the shooting and protest gun violence.

About 400 students at Don Bosco Cristo Rey High School in Takoma Park, a Washington suburb, walked out of school at 10 a.m. and gathered in a field outside. They circled around 17 empty chairs, each of which had a picture of a victim and a balloon tied to it. As the students processed outside, the song “We Are One Body” played from a speaker, including the lyrics: “We are one body, one body in Christ, and we do not stand alone.”

A student opened the service by praying that “all families and friends affected may be comforted in their suffering” and asking God to give them “wisdom and strength as they mourn this terrible tragedy.”

“What we need more than anything is change,” said Ada Gonzalez, Cristo Rey’s student body president, adding that while their prayers will help the souls of the victims, more action is needed to change gun laws. “School should be a safe place where our only worry should be to succeed.”

“The reality is, if change is not made, our school could become a target,” she added.

During the prayer service, students read the names of each of the victims of the shooting at Marjory Stoneman Douglas High School, and after each name, the students prayed a Hail Mary while someone cut the ribbon to release the balloon with the picture of that person tied to it.

After all the balloons were released, sophomore Imani Kakoma read a poem she wrote about the pain caused by gun violence and school shootings.

“This was created for the voiceless,” the poem began. “It was one man and 17 lives. No one wins because someone dies.”

Kakoma noted that only three months into the year, 12 school shootings have already taken place.

“Kids going to school, telling their parents ‘I love you,’ not knowing if they may see them again,” she said. “There is nothing like a parent not being able to hug their children.”

Kakoma concluded with a prayer, asking God to “keep us safe, because every child just wants to be safe.”

At the end of the prayer service, which lasted about 17 minutes, the students prayed: “May the souls of the faithfully departed, through the mercy of God, rest in peace.”

Students at Archbishop Carroll High School in Washington held a similar school-wide prayer service, with an opportunity for the students to walk out of the school afterward to hang an orange ribbon as a public witness that they stand against violence. Students at Gonzaga College High School in Washington participated in the walkout by marching down the street to the U.S. Capitol, holding signs with the victims’ names on them.

Most Catholic schools across the country did not sanction individual student walkouts March 14 but instead marked the somber anniversary of the deadly school shooting with “pray-outs,” rosaries or school Masses.

Queen of the Angels School in Roswell, Georgia, had a walk-in where students spent 17 minutes reaching out to others they don’t know as much and then joining in prayer that all young people would feel included in their communities.

Christopher Hernandez, a senior at Don Bosco Cristo Rey High School, said he helped organize the prayer service at his school because he thought it was a way for the community to come together “to in some way support the people who have fallen in these tragedies and the people who are still mourning their deaths.”

Kakoma said it was important to be a part of the school event because high school students are “just trying to get an education and that is something we should feel safe doing.”

“I don’t think it is fair that 14-year-old kids going to school, wanting to become doctors and lawyers, wouldn’t be able to,” she said, adding that because of the Parkland shooting, the 17 victims “don’t have the opportunity to be the things they aspired to be.”

PREVIOUS: Dallas Catholics mourn two of their own who died in N.Y. helicopter crash

NEXT: Priest who served Brooklyn parishes found murdered in Colombia