Families praise cardinal’s plan to expand parish outreach to them 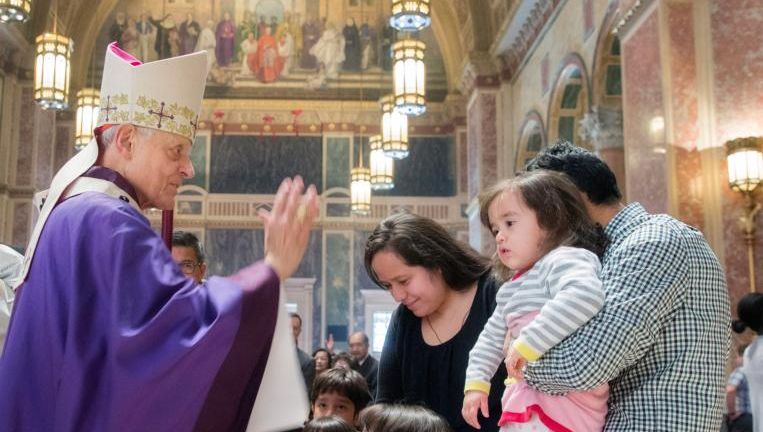 Washington Cardinal Donald W. Wuerl blesses a family following a March 4 Mass at the Cathedral of St. Matthew the Apostle in Washington. During the Mass, he announced the release of “Sharing in the Joy of Love in Marriage and Family,” a pastoral plan to implement Pope Francis’ apostolic exhortation “Amoris Laetitia” (“The Joy of Love”).(CNS photo/Jaclyn Lippelmann, Catholic Standard)

WASHINGTON (CNS) — Those who attended the March 4 Mass where Cardinal Donald W. Wuerl of Washington issued a new pastoral plan for parishes to implement “Amoris Laetitia” said they welcomed the cardinal’s initiative to expand and strengthen outreach to married couples and families.

“I think it’s a great idea, the fact he (the cardinal) is making an effort to bring in families from all around the archdiocese, to inform us, energize us and let us go back to our parishes to share the message,” said Peter Righi of St. Pius X Parish in Bowie, Maryland.

He attended the Mass with his wife, Mayka, and their three sons, Julian, Andrew and Sebastian. Afterward, he and many others at Mass were asked what they thought of the cardinal’s new plan to implement Pope Francis’ apostolic exhortation “Amoris Laetitia” (“The Joy of Love”) at the parish level.

“Families need to get a little more involved,” Mayka Righi told the Catholic Standard, Washington’s archdiocesan newspaper. “We’re all busy with work, family, school and life in general, all the commitments we have. It’s good to get us all together, to reach out in the community and to become more of a family in the parish.”

The congregation at the special Mass at the Cathedral of St. Matthew the Apostle included families from across the Archdiocese of Washington, representing the 139 parishes in the District of Columbia and five surrounding Maryland counties.

After Mass, Cardinal Wuerl greeted the families personally and handed them copies of the pastoral plan.

The families came from different racial and ethnic backgrounds, representing the diversity of the archdiocese, and from parishes along city streets, suburban neighborhoods and in the rural countryside. Massgoers included young families holding babies, middle-aged families kneeling beside teen-age children, and senior citizens who have grandchildren.

“‘Amoris Laetitia’ is a call to compassionate accompaniment in helping all to experience Christ’s love and mercy,” Cardinal Wuerl said in his broad and detailed 58-page pastoral plan, titled “Sharing in the Joy of Love in Marriage and Family.”

Among those waiting in line to meet Cardinal Wuerl and receive the pastoral plan after Mass were Jasmine Smith and her husband, McBurnett Smith III, from Assumption of the Blessed Virgin Mary Parish in Washington, joined by their children McBurnett IV, Jason and Jordyn.

“A lot of our issues in society are stemming from a breakdown in family values,” said Jasmine Smith. “It’s great he (the cardinal) is promoting those values and trying to strengthen them.”

Oscar and Cindy Mendez from St. Michael the Archangel Parish in Silver Spring, Maryland, were there with their young sons Samuel and Rafael.

“I think it’s a great approach, because the family needs the good news of the Gospel, and the cardinal is doing a great job bringing families together from all over the archdiocese,” said Oscar Mendez, who added, “It’s a tremendous blessing to feel part of the unity of the church.”

He noted that the greatest blessings experienced by him and his wife included their marriage of nine years and their children, with another baby due at the end of the month.

“We’re thankful to God for his generosity toward us,” said Cindy Mendez.

Emmanuel Ajayi of St. Matthias the Apostle Parish in Lanham, Maryland, attended the Mass with two of his daughters and his mother. He said he regarded the pastoral plan as “an enhancement of what the pope is all about — the family, bringing the family together, the body of Christ together as one family.”

Jessica and Justin Rydstrom from St. Benedict the Moor Parish in Washington attended the Mass with their three children, Nathaniel, John and Ansley.

“We think it’s great,” said Jessica Rydstrom. “We applaud the church’s pastoral efforts to families of all kinds. It’s a recognition on the part of the Church that families come in all shapes, sizes, colors and genders, and we hope all families are able to find the welcome in the church that we have found.”

Francis and Piyarat Pook, who are St. Matthew parishioners, also reflected on the importance of the pastoral plan. Francis Pook said he believed that too often divorced Catholics have felt they are not welcome in the church.

“We lost a lot of people who are faithful to God,” he said, praising the leadership of Pope Francis and his efforts to reach out to people who have felt abandoned by the Church in the past. “He understands ordinary people and that no matter what, they still want to be closer to God. Pope Francis has welcomed them back to the Church.”

The cover of the pastoral plan is a photo of a sculpture of the Holy Family, and Piyarat Pook said Joseph, Mary and Joseph offer a great example for today’s families.

“They believed in God, they trusted in God and followed what God asked,” she said.