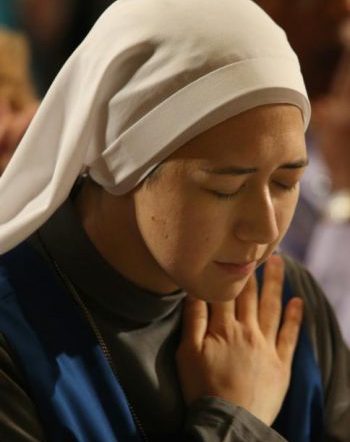 A woman religious prays during the opening Mass of the National Prayer Vigil for Life at the Basilica of the National Shrine of the Immaculate Conception Jan. 18 in Washington. National Catholic Sisters Week March 8-14 honors Catholic women religious. (CNS photo/Bob Roller)

The weeklong celebration is intended to honor the nation’s 45,605 women religious and the sisters before them who founded schools and hospitals. These sisters were, and continue to be, missionaries, contemplatives, activists and spiritual leaders.

“To meet a Catholic sister is to be inspired,” said Molly Hazelton, director of National Catholic Sisters Week based at St. Mary’s University of Minnesota in Minneapolis. “Shining a light on their ministries can move the masses, and that’s what we’re aiming to do. In a time when there isn’t much good news, we need more than ever to hear stories of how they help and heal a fractured country.”

Women religious are hosting panel discussions, pilgrimages, dinners and retreats during the week. Many of the events are informal and local, others are formally organized, funded by 89 mini-grants of up to $1,000 each awarded by the National Catholic Sisters Week office. There is a website, www.nationalcatholicsistersweek.org, and the week’s events can be followed it on social media using #NCSW2018.

During the week the Sisters of Christian Charity in Mendham, New Jersey, are sponsoring a nun run for young women to tour different convents and the Sisters of the Presentation of the Blessed Virgin Mary in New Orleans are participating in a service day at local soup kitchens and homeless shelters.

The Sisters of Mercy will celebrate the week with a series of videos and a Facebook Live streaming chat March 9 where Mercy Sister Patricia Donlin, a theology teacher at Gwynedd Mercy Academy High School in Gwynedd Valley, Pennsylvania, will answer questions about vocations and consecrated life at https://www.facebook.com/MercySisters.

Mercy sisters in the videos found here will share their vocation and ministry stories and their connections to critical concerns of the order such as care for the earth, nonviolence, immigration, anti-racism and women.

In Maryland, a religion teacher at St. Francis International School in Silver Spring is taking middle school girls to visit the Oblate Sisters of Providence in Baltimore to see Catholic sisters who share their ethnicity. “It’s important for African-American girls and other girls of color to see sisters that look like them so that, if they feel they might be called to religious life, they will believe they can achieve the vocation,” said the teacher, Kirk Gaddy.

This year, there has been a deliberate effort to engage diverse groups and introduce them to the possibility of religious life by fostering friendships with Catholic sisters. Spanish-speaking School Sisters of Notre Dame, for example, are hosting a canvas-painting party, “Pintar Y Orar” (“Painting and Pray”), in Texas to reach out to the Latino community and invite teens to paint and talk with the sisters.

Sister Bridget Waldorf, a School Sister of Notre Dame and the event organizer, said the influence of Catholic sisters is needed now more than ever as a balm for troubled times.

“Because so many consecrated sisters are engaged in ministries where deep reverence for others is fundamental to who they are in mission, they are ready to help heal and listen and engage,” she said.

She pointed out that the work the sisters do is varied — from contemplative prayer to working with the poor — but she said the “goal seems to be universal: to love one another.”

Since National Catholic Sisters Week was launched, Hazelton said, she has repeatedly heard from young adults who are impressed with the connections they have made with women religious.

“Many of the causes that drive Catholic sisters resonate with millennials: social justice, sustainability, simple living and authenticity, when your daily life matches your core values. Sisters have so much to teach us,” she added.

Material on the organization’s website points out that the weeklong initiative is “intended to amplify the rich legacy of women religious, to illuminate their current ministries and to spotlight the young women who are continuing to pursue religious life.”

According to the Center for Applied Research in the Apostolate, based at Georgetown University, more than 100 women became sisters in 2017, ranging from 24 to 86 years old and the average age was 36.