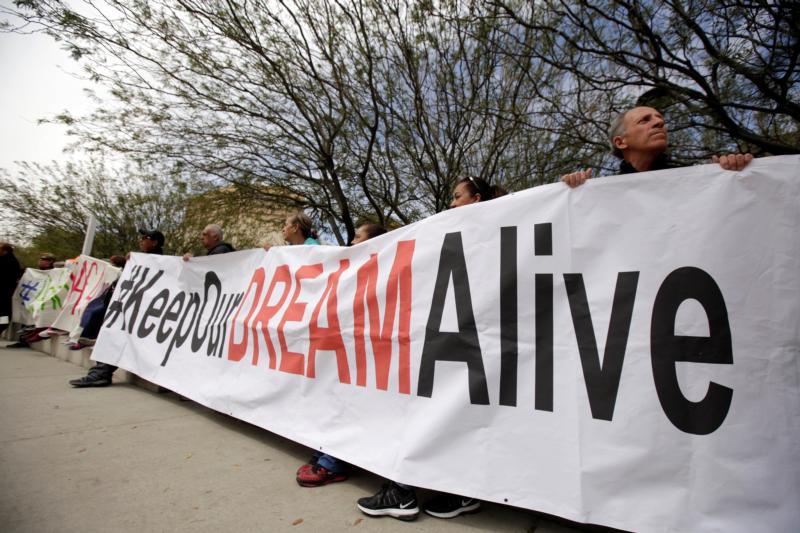 Members of the Border Network for Human Rights and Borders Dreamers and Youth Alliance hold a banner during protest March 5 outside a U.S. Federal Courthouse in El Paso, Texas, to demand that Congress pass a “clean” DREAM Act to save the Deferred Action for Childhood Arrivals. The measure is the Development, Relief and Education for Alien Minors Act. (CNS photo/Jose Luis Gonzalez, Reuters) S

BALTIMORE (CNS) — A federal judge in Maryland has ruled that President Donald Trump acted legally in ending the Deferred Action for Childhood Arrivals program, saying “the decision to wind down DACA in an orderly manner was rational.”

In a 30-page decision handed down late March 5, Judge Roger W. Titus ruled in the case of CASA de Maryland v. the U.S. Department of Homeland Security et. al. Titus is a judge of the U.S. District Court for the District of Maryland, based in Baltimore.

Titus said Trump’s executive order to rescind the program “is clear as to its purpose and reasoning,” but he also acknowledged Trump’s “occasionally disparaging remarks” about immigration. However, “as disheartening or inappropriate” they made be, “they are not relevant to the larger issues governing the DACA rescission.”

In September, Trump announced his administration was ending the program, and he gave lawmakers until March 5 to find a legislative solution to protect the young adults benefiting from DACA, which was put in place in 2012 through an executive order signed by President Barack Obama.

Titus’ ruling does not impact previous decisions by two federal judges, in California and New York, who effectively blocked the March 5 deadline by saying Trump could not end the program and that the government must continue to accept renewal applications for DACA beneficiaries already in the program. Congress so far has failed to pass any measure to keep DACA in place.

“This case is yet another example of the damaging fallout that results from excessive political partisanship,” the judge in Maryland wrote. “The highly politicized debate surrounding the DACA program has thus far produced only rancor and accusations.

“During the recent debate over the rescission of DACA, the program even turned into a bargaining chip that resulted in a brief shutdown of the entire federal government earlier this year.”

Titus said the decisions in California and New York “are premised on the legal conclusion that DACA is lawful, and therefore, a decision to rescind DACA on the basis of unlawfulness is necessarily arbitrary and capricious.”

“Respectfully, this court disagrees,” he said. “Regardless of the lawfulness of DACA, the appropriate inquiry is whether or not DHS made a reasoned decision to rescind DACA based on the administrative record. Any alternative inquiry would impermissibly require a court to substitute its judgment for that of the agency.”

The Trump administration acted on “a legitimate belief that DACA was unlawful and should be wound down in an orderly manner, while giving Congress a window to act and adopt an appropriate legislative solution.”

Titus said his review of the DACA rescission order “does not support the notion that it was targeting a subset of the immigrant population, and it does not support any supposition that the decision was derived on a racial animus. That is where the judicial inquiry should end.”

Titus added: “This court does not like the outcome of this case, but is constrained by its constitutionally limited role to the result that it has reached. Hopefully, the Congress and the president will finally get their job done.”

NEXT: Hispanic Catholics seen as the emerging ‘voice, conscience’ of church