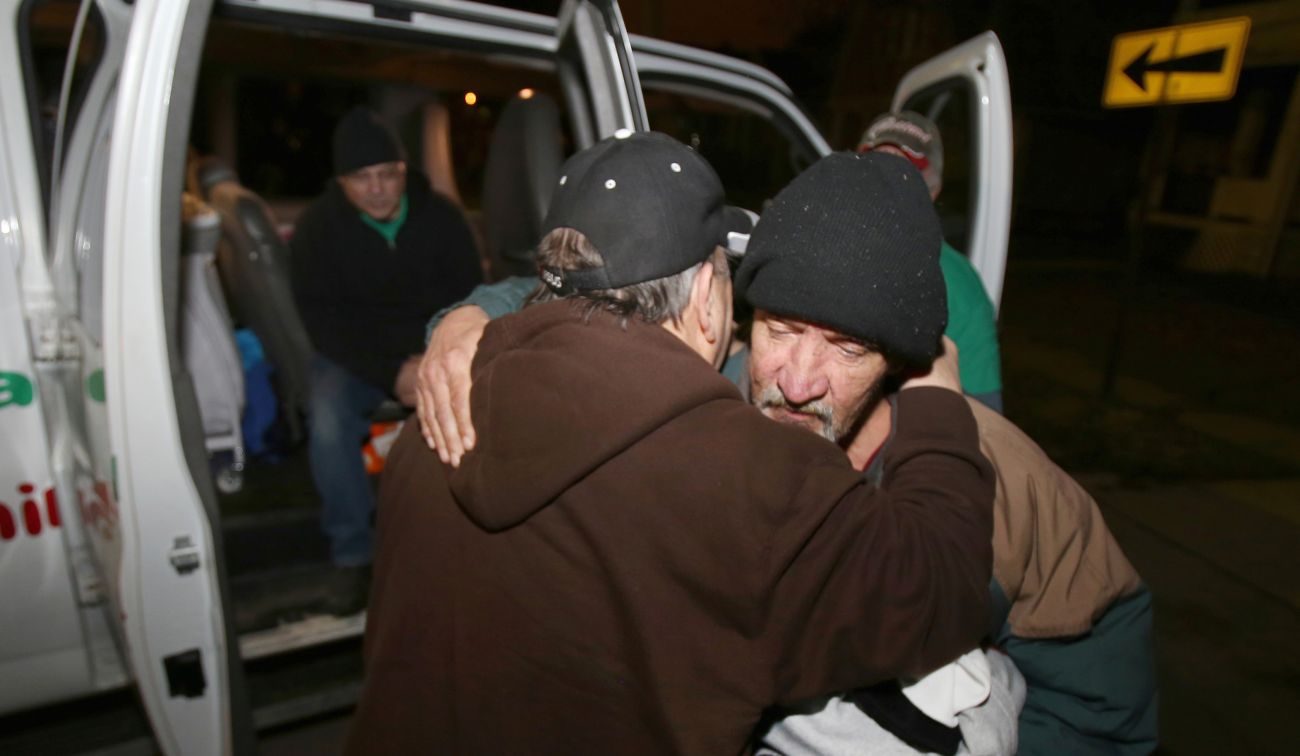 Robert, Roger, Jim and young newcomer Robby know the wait for the crew from St. Paschal Baylon Parish in suburban Highland Heights is worthwhile because the food is tasty and filling — and hot.

The four men live in tents under the century-old bridge, hidden from view even though it’s but a short walk from the Flats upscale entertainment district. They are among two to three dozen people the Knight Riders visit in a well-stocked van every Wednesday including holidays.

Bob Ukovic, 64, one of the Knight Riders, says the people in the camps are invisible. “No one sees them.”

Robert, 58, with a heavy salt-and-pepper beard, has gotten to know and trust the Knight Riders, part of the parish’s Helping Hands ministry.

“It’s a wonderful thing,” he says of their service in a deep quiet voice from under the hood of his a camouflage coat. “God bless ’em. It helps. It helps us out a lot.”

It’s the last stop for the crew from the parish overseen by the Congregation of the Blessed Sacrament. A small team of volunteers has been visiting the camps in scrubby fields, isolated wood lots, doorways, and under and atop bridges since 2010. In addition to hot meals, the crew loads their van with mostly donated pants, shirts, hoodies, underwear, shoes, boots, toilet paper, radio batteries, water, soda and canned goods.

The ministry of the Knight Riders, named for the parish school’s Green Knight athletic teams, is more than just delivering necessities. It’s building relationships and fulfilling the call of Matthew 25.

Parishioner Rick Costanzo, 65, has been making the rounds to Cleveland’s homeless people the whole time. A real estate appraiser by day, he finds the call to serve a necessary part of his faith life.

“We are feeding Christ himself,” he says. “Either you take Jesus’ word seriously or you don’t.”

Each Wednesday starts at mid-afternoon in the Blessed Sacrament kitchen on parish grounds. Parishioner Betty Allen coordinates cooking, thoughtfully planning each week’s meal. She has been doing it for five years.

“It’s just a natural thing. We know we are doing something positive. You want to help somebody else,” says Allen, 57. “The guys (Knight Riders) that go out and relay the stories back here, how can you not be moved?”

On a typical night, Allen and a few helpers will prepare enough food to feed 40 people. This night’s menu includes Mexican lasagna, tortilla chips with salsa, and dessert. 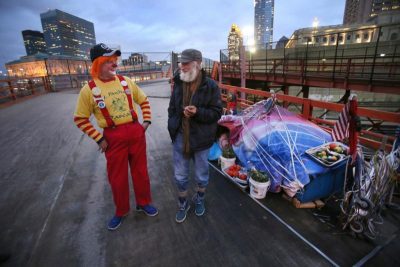 Bob Ukovic, dressed as a clown, talks with Federico Catalano in downtown Cleveland Feb. 28 after Ukovic and other members of the Knight Riders outreach ministry of suburban St. Paschal Baylon Parish paid a visit and delivered food. (CNS photo/Bob Roller)

The crew includes Frank Kuhar, “the maestro,” who serves the meals from the back of the van. A retired mail carrier, he’s accustomed to his work area being “just so,” like his mail sorting desk at the post office.

There’s also Sal Dottore, who quietly engages folks in conversation. He finds the ministry a good way to thank God for the blessings he has had in life.

The final volunteer is Mike Vorhees, who himself was homeless for 15 years until landing a place of his own in 2012. All the better, he had his last drink two years ago. He met the Knight Riders while living in downtown Cleveland, often in an alcohol-induced stupor.

Vorhees, 55, who served stints in prison for felonious assault, shows up early to help prepare the van. Because he’s known on the streets, he hopes his presence will inspire others.

“I do this to help people to know where I’m at in life. If you do what you’re supposed to do your life will get better,” he says.

Ukovic has been clowning for more than two decades, the last several years full time. He, along with Deacon Bourgeois, 82, brought the ministry to the parish in 1999.

The Knight Riders make more than a dozen stops around the city. The first is shortly after 5 p.m. at a gas station-convenience store on the border of Cleveland and Euclid just feet off the Lakeland Freeway. There they greet Keith and Jerome, longtime friends who once lived in nearby woods, where the din of passing traffic is almost constant.

The store’s owners invited Keith, 60, to live in a corner of a darkened garage in the back of the building. His space, separated by office partitions, includes a bed with thick covers, plenty of plastic crates for storage, a lamp and his beloved books.

Jerome, 54, stays in an unused building he discovered a mile away. The owners began renovating the structure recently and have let Jerome stay. He helps with the work when he can. “A lot of people are a lot worse off than me,” he says.

Northeast of downtown in an area covered with scrub and a few trees and located between the Shoreway, a lakeside highway, and a busy railroad line, a camp with about a half-dozen people has been a longtime stop on the Knight Riders’ route. The group includes Gina, 27, and Jaz, 32, two women who arrived separately from Texas in the fall, but met in town.

They say they stumbled upon the camp. While both have family in Ohio, they prefer to stay at the camp. For now, they are comfortable, Jaz says, and outreach workers visit from time to time to make sure they have what they need.

One of those workers, Jim Schlecht, who works for Care Alliance and is a member of St. Patrick Parish on the city’s near West Side, credits the Knight Riders for building “wonderful relationships” with the people who prefer the camps to traditional shelters. “St. Paschal is bringing what they need in a compassionate, nonjudgmental way,” he says.

Costanzo explains that women are a growing segment of homeless people who stay outdoors. He estimates that women make up about 20 percent of the people served, double what he saw when he started. When possible, the crew will have a woman from the parish with them.

A short distance away near a small wooded area, the team meets Rick and a deaf and mute man who Ukovic says is known only as Kevin or Ken. Rick says he’s hungry and quickly takes his meal into a nearby bus shelter and starts to eat. The mute man points to other things he needs and caries his meal away, presumably to his well-hidden tent.

Next up is Charles Gibson and Federico Catalano downtown. Both stay near FirstEnergy Stadium, home of the Cleveland Browns football team, and are well-known to outreach workers.

The men keep to themselves. Gibson has claimed a trash-laden spot under a highway bridge that is well protected from the chilling winds off Lake Erie. He accepts the meal, a pair of pants and a sweatshirt before moving away.

Catalano lives in makeshift canvas structure emblazoned with U.S. flags. He built it on a pedestrian bridge that connects downtown with the stadium. For now, he’s safe. Construction on the bridge has been suspended for the winter. When work resumes, he’ll have to move.

The Knight Riders joke with Catalano, a man they’ve known for years. Costanzo relates his story: He hails from Italy and once belonged to St. Paschal Baylon. About 27 years ago, he “snapped,” trading a solid middle-class job and his family for the streets. Several times, outreach workers helped him move to a furnished apartment, but each time he left to set up camp anew.

The night continues on a mazelike route through Cleveland’s West Side neighborhoods. A few stops come up empty and Ukovic expresses concern for the lone men whom the crew met over the winter. Even a camp with about a dozen tents under a busy graffiti-covered West 25th Street bridge yields no one.

It’s on to the edge of the Flats and another community on a bluff above the Cuyahoga River that the city wants to turn into a park. Vorhees lived there for a while. On this night, just three men show up. One is Jack, who Costanzo says is the leader of the camp. After exchanging pleasantries and getting what they need, the men make their way back into the brush; the volunteers head to their last stop under the Veterans Memorial Bridge.

Costanzo looks back at them. “We do what we can out here,” he says. 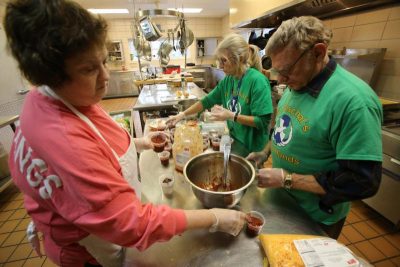 There’s also a group that prepares regular meals for Catholic and non-Catholic congregations in Cleveland; Soul Patrol which finds parishioners visiting formerly homeless people whom the Knight Riders served and who are now in agency housing; and visits to Villa Serena, an independent living facility for elderly people who might otherwise be homeless.

Deacon Bourgeois says the outreach is a way for the entire parish to live the Eucharist-centered charism of the Blessed Sacrament congregation.

“We see a human being behind all this.”