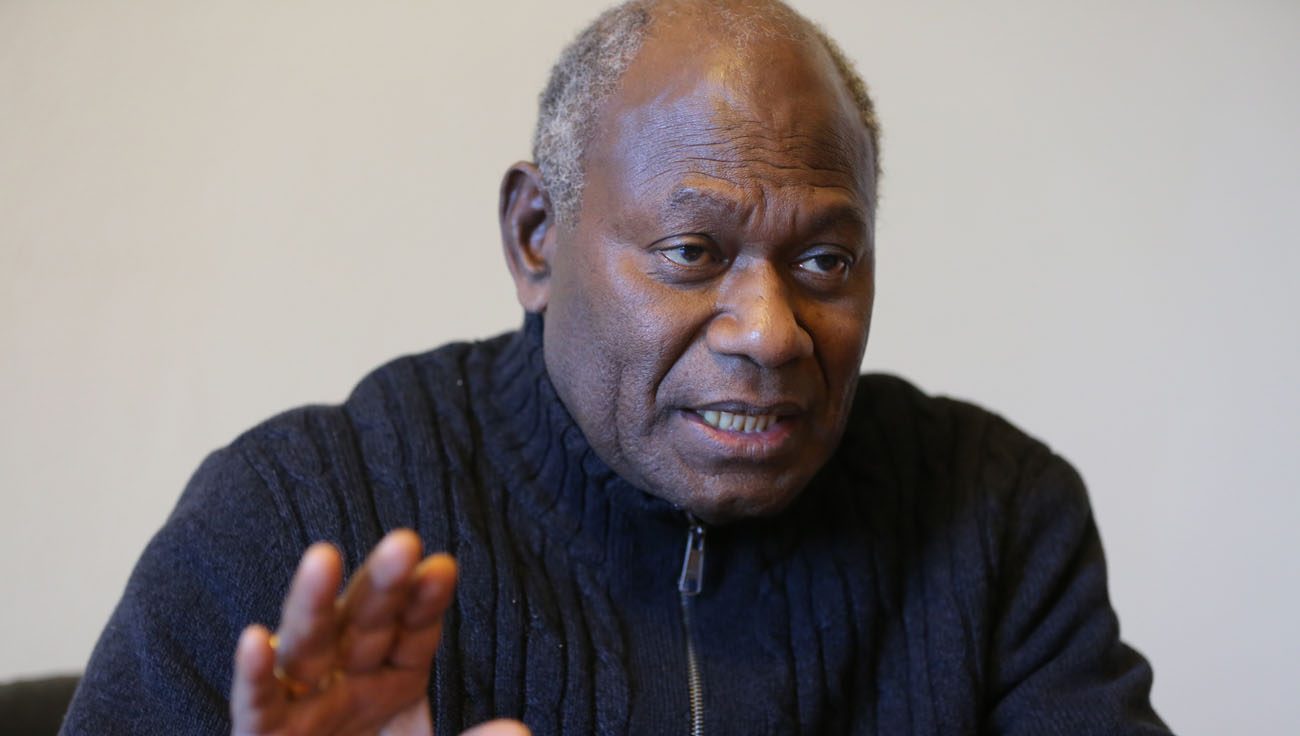 Cardinal John Ribat, archbishop of Port Moresby, Papua New Guinea, gestures during a March 14 interview with Catholic News Service at the Franciscan Monastery of the Holy Land in Washington. During a four-day U.S. visit the cardinal shared stories of the challenges posed by rising sea levels and undersea mining to thousands of people in his country. (CNS photo/Bob Roller)

UPDATED – WASHINGTON (CNS) — People of the southwest Pacific Ocean nation of Papua New Guinea face dual threats from rising sea levels and the advent of undersea mining for valuable metals, the country’s first cardinal said during a visit to the nation’s capital.

Cardinal John Ribat, archbishop of Port Moresby, Papua New Guinea, shared stories of his fellow Papuans who have been forced to move inland from ancestral lands along the ocean as rising seas have inundated their homes.

The same is true on hundreds of tiny islands throughout the Pacific basin, he told Catholic News Service March 14 before a visit to Capitol Hill to plead for action to protect the environment and address climate change.

“We are responsible to voice this awareness, that this is something we can’t stop talking about. If nothing is happening to us in the way of help, our people will be faced with disaster,” Cardinal Ribat said.

The Catholic Church must accompany people who face any type of difficulty, he said.

“We are close to the people and the people come to us. They talk to us about this, and we go and see what is happening. We are there and they see us doing something, going with them through this situation they are facing. They always find comfort through the church being with them facing these challenges,” he added.

“It’s really the spiritual side that is making them feel more at ease, that they have the strength to face this,” he continued.

The 61-year-old cardinal expressed deep concern as well during the interview and a presentation March 13 at The Catholic University of America about the expected start in 2019 of undersea mining in the eastern Bismarck Sea between the Papua New Guinea’s New Ireland and New Britain islands.

Led by the Canadian firm Nautilus Minerals, exploration on the seafloor nearly a mile below the ocean surface since the 1980s has uncovered high concentrations of copper, gold, zinc and silver near hydrothermal vents. Mining is expected to bring a much-needed infusion of cash through royalties to the island nation.

However, Cardinal Ribat said, fishermen are concerned that the fishing grounds that have been sustainably harvested for generations will be disturbed by the remote-controlled robots recovering the metals.

“We as church have a grave concern. It will affect the livelihood of the people there,” he said.

There also is concern about pollution from the mining operation that could affect marine life.

A company representative said in an March 16 email to CNS that the company’s work has been reviewed by experts working for the Papua New Guinea government, the International Seabed Authority and other scientific organizations.

“All of these reviews have confirmed that seabed mining has limited environmental impacts and has positive net benefits,” wrote Noreen Dillane, corporate communications manager.

The company expects no tailings or waste dumps to result from the mining, which is less than 0.1 square miles in area, Dillane said. No communities will be directly affected by the site 22 miles from the west coast of New Ireland and no landowners will require resettlement, her message added.

Dillane also said that Papua New Guinea’s Mineral Resource Authority and Nautilus Minerals have repeatedly asked to meet with Cardinal Ribat, but that he has not accepted any of the invitations.

Since being appointed the country’s first cardinal in 2016, Cardinal Ribat has focused much of his ministry on addressing climate change. He has called the environment the most important issue for the Papuan Catholic Church to address because of the risks facing thousands of people in the country of 8 million.

“We’re accompanying people through this,” the cardinal said, calling climate change a family issue that connects the words of Pope Francis’ apostolic exhortation on the family, “Amoris Laetitia,” and his encyclical on the human relationship with the environment, “Laudato Si’.”

“The issue for us is the families are suffering,” Cardinal Ribat said. “They are the ones that will be in more of a struggle.”

Rising seas are affecting islands through the western Pacific, and Cardinal Ribat, who is president of the Federation of Catholic Episcopal Conferences of Oceania, said his fellow bishops agree that immediate action is needed to assist people who are being forced to relocate.

“Most of the islands are in danger,” he told an audience at The Catholic University of America March 13.

Drinking water also is at risk, he said. Some communities have seen their wells infiltrated by sea water, causing an increase in salinity, and some people have had to abandon traditional gardens, he said.

Cardinal Ribat arrived in the U.S. to speak on the environmental impact of climate change at St. Ignatius Loyola Parish in New York City March 12. A member of the Missionaries of the Sacred Heart of Jesus, he also received an award from the parish for his commitment to upholding the principles of Jesuit spirituality in his ministry.

He decided to add a stop on Capitol Hill, where, he said, he hoped that the stories of the climate challenges confronting average people will influence members of Congress to act to protect the environment.

The cardinal also expressed concern that U.S. President Donald Trump had committed to withdrawing the country from the Paris climate accord reached in 2015.

“Pulling out of this is not realizing what the struggle we are going through,” he explained. “I don’t think they are fully aware of the costs of this. The pulling out by the president is so difficult for us to understand. We are the victims of what is happening.”

Papua New Guinea is an overwhelmingly Christian nation. About 27 percent of residents are Catholic and 70 percent are Protestant. The remainder follow Baha’i, Islam or indigenous religions.

NEXT: Study of the universe ‘an act of worship,’ Vatican astronomer says