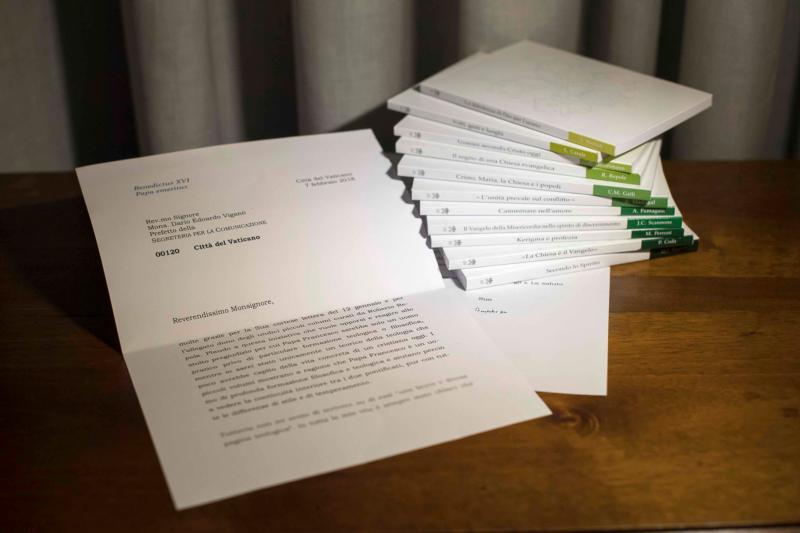 A letter from retired Pope Benedict XVI to Msgr. Dario Vigano, prefect of the Vatican Secretariat for Communications, is seen in this photo released by the Vatican March 12. The retired pope defends Pope Francis in the letter, which was written as a promotion for a book series titled, “The Theology of Pope Francis.” (CNS photo/Vatican Media)

UPDATED – VATICAN CITY (CNS) — On the eve of the fifth anniversary of Pope Francis’ election, retired Pope Benedict XVI defended the continuity of the church’s teaching under his successor and dismissed those who criticize the pope’s theological foundations.

In a letter sent to Msgr. Dario Vigano, prefect of the Vatican Secretariat for Communication, Pope Benedict applauded the publication of a new book series titled, “The Theology of Pope Francis.”

“It contradicts the foolish prejudice of those who see Pope Francis as someone who lacks a particular theological and philosophical formation, while I would have been considered solely a theorist of theology with little understanding of the concrete lives of today’s Christian,” the retired pontiff wrote.

The Secretariat for Communication released a photograph of the letter in which the final lines were blurred. While Pope Benedict said early in the letter that he hoped the 11 volumes would put an end to the “foolish prejudice” against Pope Francis, in the blurred lines the retired pope said he could not write a complete theological reflection on the 11 volumes because he had not read them and would be physically unable to do so in time for the presentation of the volumes to the public.

Msgr. Vigano read from the letter during a presentation of the 11-volume series March 12.

The complete letter was published on several blogs.

Before reading the letter, Msgr. Vigano said he sent a message to Pope Francis and Pope Benedict regarding the publication of the book series.

He also asked if Pope Benedict would be “willing to write a page or a page and a half of dense theology in his clear and punctual style that (we) would have liked to read this evening.”

Instead, the retired pontiff “wrote a beautiful, personal letter that I will read to you,” Msgr. Vigano said.

Pope Benedict thanked Msgr. Vigano for having given him a copy of “The Theology of Pope Francis” book series, which was authored by several notable theologians.

“These small volumes reasonably demonstrate that Pope Francis is a man with profound philosophical and theological formation and are helpful to see the interior continuity between the two pontificates, even with all the differences in style and temperament,” he wrote.

Pope Benedict has made no secret of his affection for and admiration of Pope Francis.

During a Vatican celebration for the 65th anniversary of Pope Benedict’s priestly ordination June 28, 2016, the retired pope expressed his sincere gratefulness to Pope Francis, saying that his goodness “from the first moment of your election, in every moment of my life here, touches me deeply.”

“More than the beauty found in the Vatican Gardens, your goodness is the place where I live; I feel protected,” Pope Benedict said.