WASHINGTON (CNS) — Bluegrass music may not be the first thing that comes to mind when people think of Dominicans, but for the 10 Dominican brothers and priests at the Dominican House of Studies in Washington who recently released their debut album, “The Hillbilly Thomists,” the two have a lot in common.

“The life of holiness is the happiest life. It is the good life,” said Brother Jonah Teller, who plays guitar on the album. “I was drawn, and I think a lot of men are drawn, by the joy the brothers exhibit … to be living this life, to be saving our souls, to be drawing closer to Jesus, and to do it with brothers.”

Likewise, while listening to bluegrass music, “there is a real happiness that is just drawn out of you,” he said. “So I think that we’re geared to be happy, and bluegrass lets you be happy in a really expressive way.”

That happiness was tangible as six of the Hillbilly Thomists played to a standing-room-only crowd April 11 at the Catholic Information Center in Washington. Middle-age men tapped their feet and babies clapped their hands to the tunes. The musicians laughed with each other as they created the proper setting for bluegrass music, which they said is usually played informally around a kitchen table.

Brother Simon Teller, who plays the fiddle in the new album, is Brother Jonah’s brother. They grew up in Cincinnati, attending St. Gertrude Parish, where Dominicans in the religious order’s Eastern province go for their novitiate year.

Looking through old family photos, Brother Simon found one of himself as a 13-year-old, playing the fiddle alongside now-Father Thomas Joseph White, who had begun playing the bluegrass mandolin after his novice master told all novices to take up a hobby.

Little did the 13-year-old know that he would later wear a similar white habit and again play the fiddle alongside Father White, who is now an associate professor of systematic theology at the Dominican House of Studies.

Brother Justin Bolger was a professional touring musician and a sound engineer before entering the Dominican order. Brother Joseph Hagan and others had studied music in college. Brother Simon had spent summers as a street musician in Asheville, North Carolina.

“The different skills we brought fit well together,” said Brother Joseph, who plays the drums. “Obviously, we came together primarily for God. … We aren’t just people who have skills and (who) use each other to make an album.”

Unless they are practicing for a specific gig, the Hillbilly Thomists’ schedule of playing together is pretty fluid.

“It is a true extension of our fraternal life,” Brother Jonah told the Catholic Standard, newspaper of the Archdiocese of Washington.

The product of the brothers’ fun pastime has received a response that none anticipated. It was in the top 10 of the bluegrass Billboard charts for about 10 weeks, at one point reaching the No. 3 spot, and it also reached the top 20 of all albums on Amazon. People from around the world are listening to it, reviewing it and often learning about St. Thomas Aquinas in the process, as they Google, “What is a Thomist?”

Country and bluegrass legend Ricky Skaggs stopped by the Dominican House of Studies to visit the Hillbilly Thomists and, before playing bluegrass with them, joined them for prayer and lunch.

The impetus for the album was as a fundraiser, since the album’s proceeds go to the Dominican House of Studies, but the album also is a form of preaching, said Brother Simon. The Dominicans also are known as the Order of Preachers.

The songs are “about Christ and grace and about very human things like death,” he said. The themes are found in tracks such as “What Would You Give in Exchange for Your Soul?” inviting the listener to contemplate dying and meeting God; “Poor Wayfaring Stranger,” reflecting the experience of pilgrimage; and “Leaning on the Everlasting Arms,” invoking an image of relying on God.

People have told the brothers that they see the album as something that they can send to their children who have fallen away from the Church or share with their non-Catholic friends, said Brother Simon. It is considered “cultural, but at the core of it is Christianity,” he said.

While the songs have deep and complex theological themes, part of the beauty of the bluegrass is its simplicity, said Brother Joseph.

“The lyrics are very prayerful, if not just simply prayers,” he said.

Since they take vows of obedience, Brother Simon said it is difficult to talk about the future of the band, but added, “We’re all excited to see where the Lord takes it.” 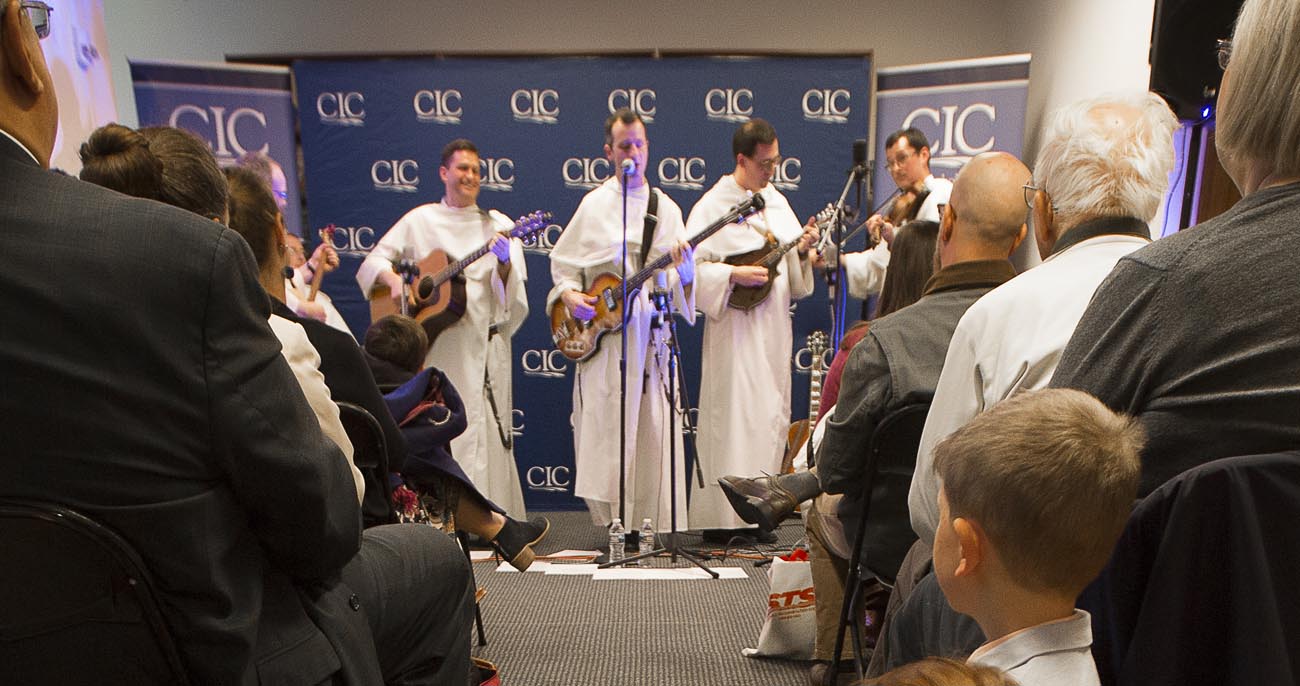 NEXT: Fun and fresh book appeals to hipster Catholics with spiritual swagger