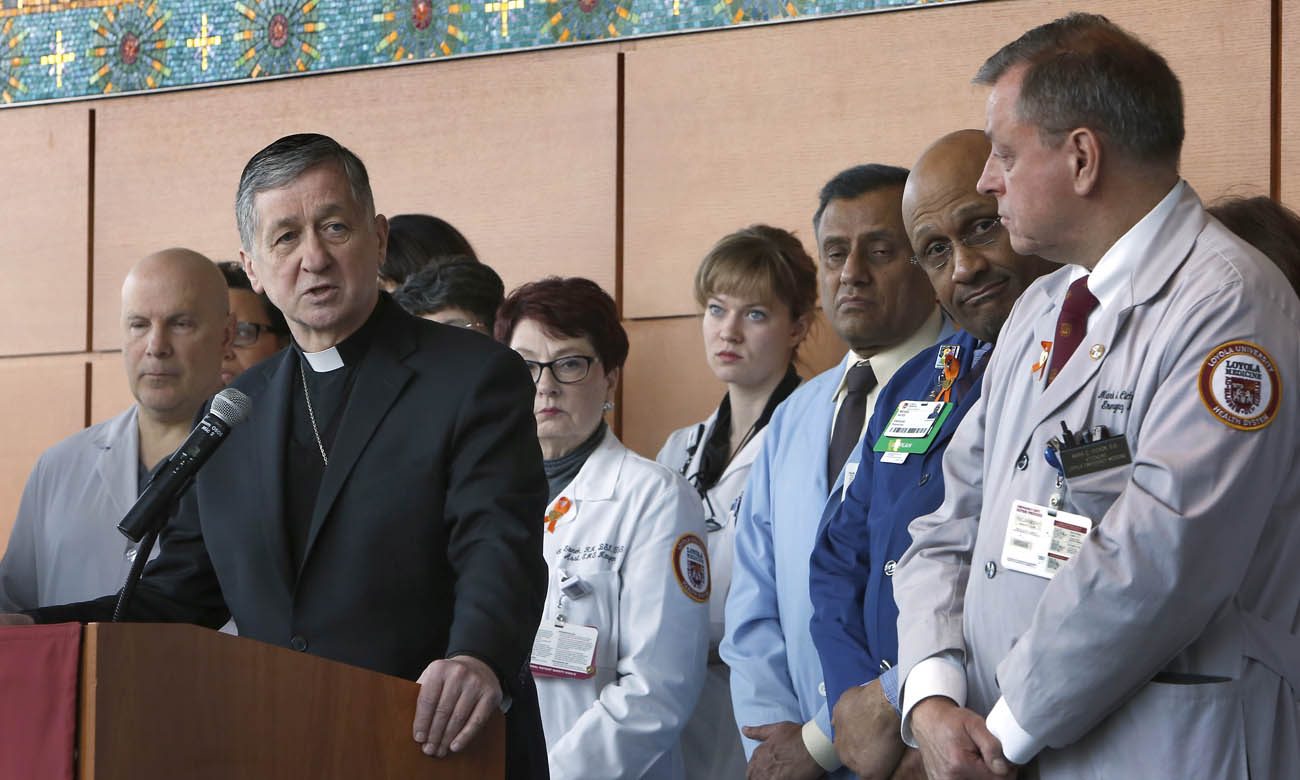 “We are united in demanding that those we elect have the moral courage to take the steps they can to save lives — maybe not all the lives, maybe not every day, but ask those who grieve if their child, their brother, their mother was not worth the effort to try,” the cardinal told news media as he stood on a dais with doctors and nurses who work in Loyola’s emergency and trauma departments.

“These emergency and trauma health care professionals and pastoral care associates are more than ready to discuss how we should weigh the price of lives lost, diminished by injury and haunted by grief and fear against the right to sell weapons in shops we are told are too expensive to license,” Cardinal Cupich said. “So, I call on the elected officials of Illinois, listen to them, they are the real experts on gun control, and act to see that S.B. 1657 becomes law.”

S.B. 1657 is an attempt to crack down on gun violence by calling for gun dealers to be licensed by the state. It also requires gun shop owners to run background checks on employees, train workers on how to spot “straw” purchases, in which a customer buys a gun for someone else, and install video surveillance equipment. So-called “big-box” stores are exempt from the legislation.

Republican Gov. Bruce Rauner vetoed the legislation in March before the primary election, and the Senate accepted that veto when it reconvened after spring break, leaving the chamber 15 days to attempt an override vote. Such action would require a three-fifths majority — or 36 votes.

If the Senate is successful in overriding the governor’s veto, the legislation then moves to the House, which has 15 days and needs 71 votes to overcome Rauner’s veto.

In 2016, the Centers for Disease Control and Prevention reported that over 36,000 people died from injuries related to fire arms in the United States, including 1,490 deaths in Illinois.

As a Level 1 trauma center, Loyola is an epicenter of the gun violence epidemic. The emergency department treated 283 gunshot victims in fiscal year 2017 — nearly double the number from 2015.

“Gun violence is a public health epidemic in America,” said Dr. Mark Cichon, chair of Loyola Medicine’s Department of Emergency Services. “As an academic medical center, we believe time is long overdue to treat this public health epidemic like any other health issue. We need to conduct research and take a scientific approach to combat gun violence.”

When the weather warms, the number of gun victims soars, Cichon noted. Doctors and nurses rush to treat the wounded while chaplains and caregivers try to console the families.

“We are on the front lines of the battlefield. It takes a toll on us. But far worse, it is taking a toll on our communities and society at large,” he said.

Loyola is not the only hospital in the Chicago area working on getting to the root causes of violence, said the Rev. Michael Hayes, a weekend chaplain in the emergency department. The hospitals stand together to oppose the violence.

“The gun dealer licensing bill is a common-sense measure that will require gun dealers to be held to the same standards as many other businesses,” Rev. Hayes said. “It is a solution whose time has come.”

Statistics in recent years show that the gun violence is getting worse and all touched by it are impacted by the trauma.

“We as caregivers support individuals and families through devastating loss every day. Gun trauma envelops whole families in misery and anger, fear, shock and life-altering stress,” Hayes said. “The gun violence epidemic we have in metropolitan Chicago robs all with impunity.”