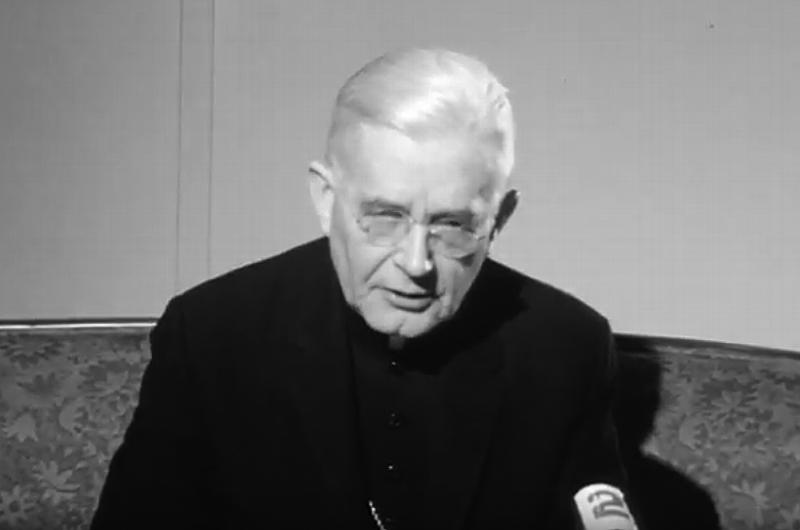 Shown in a screenshot of a YouTube video, Baltimore Cardinal Lawrence Shehan speaks out in favor of open housing in 1966. Not long after he was loudly booed and heckled while speaking in favor of an open housing bill before the Baltimore City Council, Cardinal Shehan calmly and confidently read his testimony for a local television audience. (CNS photo/Catholic Review)

BALTIMORE (CNS) — Not long after he was loudly booed and heckled while speaking in favor of an open housing bill before the Baltimore City Council in January 1966, Cardinal Lawrence J. Shehan calmly and confidently read his testimony for a local television audience.

“The dignity of the individual requires that no prohibition be placed against any person with respect to his place of habitation simply because of his race, religion or ancestry,” said the white-haired prelate, who headed the Baltimore Archdiocese from 1961 to 1974. “The overwhelming persuasive moral argument which calls for statutory relief is one which cannot be postponed or crippled.”

For the first time in more than a half century, digitized footage of the cardinal’s television appearance is now available for viewing on YouTube.

The bill, introduced by D’Alesandro, would have banned discrimination in the sale and rental of all city housing. The cardinal was the first speaker at the City Council meeting, which was moved from City Hall to the War Memorial Building to accommodate more than 2,000 people who attended.

According to 1966 coverage by what is today known as Catholic News Service, approximately half the audience stood and applauded as the cardinal walked to the microphone. Others booed and jeered him. Police escorted the cardinal from the hall following his testimony, CNS reported, “as the audience once again divided between jeers and cheers.”

Before the hearing, the cardinal’s brother had received an anonymous call from someone threatening to shoot the cardinal if he testified in support of the bill.

“It was an act of disrespect to probably the number one Catholic spokesman in this country,” the Democratic City Council president said. “It just exemplified the pent-up emotions that exist in this consideration. I thought that regardless of the cardinal’s position, which was obviously known, that there would be respect for the office that he held as a prince of the church, the archbishop of Baltimore and cardinal.”

D’Alesandro, the bill’s sponsor, added that “people are so blinded sometimes by their emotion on this subject that they just throw caution to the wind, and, as a result, we saw what took place last night.”

McKeldin, a Republican, was similarly shocked.

“We Baltimoreans, of course, are not proud of the hearing held in the War Memorial Building when the beloved Cardinal Shehan of this city was booed by some of the spectators,” he said. “It seems to me that if I were against that bill and had been present and heard the cardinal booed, for no other reason, possibly, I would have voted for it.”

Despite D’Alesandro’s prediction that the cardinal’s testimony would sway the vote in favor of the bill, the council voted down the measure. Fair housing laws would not come to Baltimore until the U. S. Congress banned housing discrimination with passage of the Civil Rights Act of 1968.