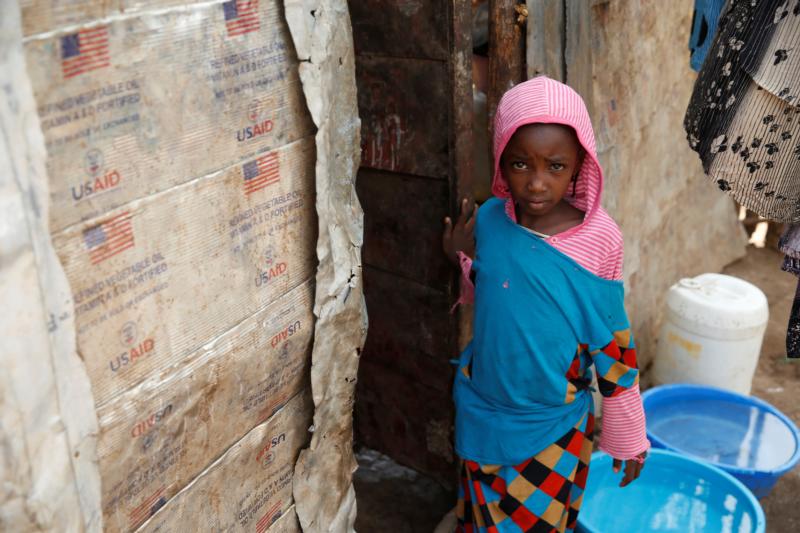 A girl stands outside a makeshift shelter March 5 at the Kakuma refugee camp in northern Kenya. A new global study conducted by FADICA examines the Catholic response to the humanitarian crisis that has forcibly displaced 65 million people worldwide, including 22.5 million refugees. FADICA stands for Foundations and Donors Interested in Catholic Activities, a network of more than 40 Catholic foundations. (CNS photo/Baz Ratner, Reuters)

WASHINGTON (CNS) — A study by Boston College’s Center for Social Innovation found nearly 200 Catholic-originated projects both in the United States and around the world that used Catholic social innovation to help stem the worldwide migration and refugee crisis.

The study, funded by FADICA — an acronym for Foundations and Donors Interested in Catholic Activities — was issued earlier this spring. The study is the first part of a three-year Catholic social innovation initiative sponsored by FADICA in partnership with Boston College.

“The research revealed that Catholic social innovation in the refugee crisis is made distinct by fostering or leveraging social capital and repurposing existing resources to solve a new problem,” the executive summary of the report said.

One example was highlighted by Alexia Kelley, FADICA’s president and CEO, during an April 10 phone interview with Catholic News Service.

The Sisters of the Good Shepherd, who have a charism to work with migrants and refugees, conducted job training projects for 1,200 women in Bolivia and Chile who were at risk of becoming migrants. “An amazing statistic … all 1,200 women got a job. And 60 percent of the women who were potentially going to migrate decided to stay with their families,” Kelley said.

Of the projects studied by Boston College, 64 of them were specifically cited for being noteworthy. A bit more than half were sponsored by Catholic sisters. About two dozen were in the United States, with the other projects scattered across the globe.

Among the projects held out for praise were Stone House, where nuns converted their own home into a shelter in Pennsylvania, and the No Strings Partnership, a puppet company and a nonprofit organization partnering to help displaced children in the Middle East deal with trauma after fleeing war and violence.

The study defined Catholic social innovation as “a new response to social problems … that have been with us for some time but have been difficult to address effectively and/or efficiently. The response might take the form of a new service, organization, product, structure, paradigm or approach to resource development. It should have the potential to transform the problem, the possibility of being sustainable and the promise of enhancing social justice.”

The principles and values of Catholic social teaching also were deemed key in the study. They included human life and dignity, the common good, rights and responsibilities, a preferential option for the poor and vulnerable, the dignity of work, solidarity, subsidiarity, care of the earth, integral human development and “welcoming the stranger,” defined as “emphasizing radical hospitality or offering a new interpretation of what it means to welcome the stranger in an immigrant church.”

“We have so many resources and assets in the Catholic Church, whether assets or buildings or people,” Kelley said. “They’re not all financial.” She added, “We don’t have to create new organizations. We have strong institutions and organizations that have been around for decades, and centuries. But due to the extent of this crisis, they have been creatively looking at how we create new ways to respond to the scale of this challenge.”

Kelley said the survey findings were shared with FADICA member Catholic philanthropic groups during the organization’s annual meeting. “There were several representatives of the organizations that were featured who spoke to our members, and it was very well received,” she noted.

The study recommended several funding principles to foundations, among them patience, flexibility, subsidiarity, partnership with grantees and “blended dollars.”

“With emerging social enterprises, be open to using for-profit dollars as well as philanthropic dollars to help confront this crisis,” it said.

It also suggested setting aside money akin to a “risk capital” fund. “New initiatives sometimes fail. Consider allocating some of your grant portfolio to ‘risk capital’ that allows you to invest in new ideas and absorb the losses if they fail,” the study said. “Then, fund learning from the failure so you and the grantee get smarter.”

Kelley told CNS the focus for the second year of the initiative, while not definitively settled, will look at areas of parish vitality.