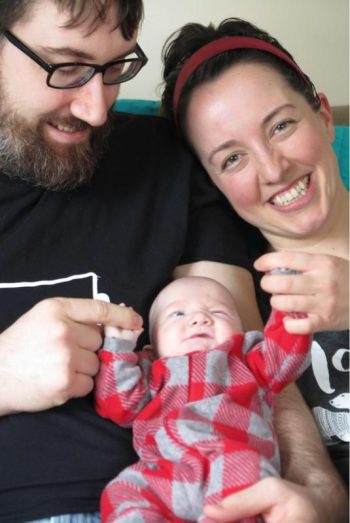 Jeff and Katherine Dobbs sit with their newborn son, Fulton, at their home after being released from the hospital in early March in Brooklyn Center, Minn. Fulton, named after U.S. Archbishop Fulton Sheen, was born Christmas Eve with an immunodeficiency that remains undiagnosed. (CNS photo/courtesy Jeff and Katherine Dobbs)

ST. ANTHONY, Minn. (CNS) — Even before Katherine and Jeff Dobbs were married, they had a name picked out for a future son: Fulton Francis.

Fulton, for Archbishop Fulton J. Sheen, known for his mid-20th century broadcast evangelism, and Francis, for Pope Francis, whom the couple met at a general audience during their honeymoon in 2017.

Little could they have known the significance of their baby’s namesakes less than a year later.

Fulton Francis Dobbs was born Christmas Eve with an immunodeficiency that remains undiagnosed. They have been praying for Fulton’s healing through the intercession of Archbishop Sheen, whom Pope Benedict XVI declared venerable in 2012.

The next step in the sainthood process is beatification, which requires one miracle that is verified as having occurred through that person’s intercession.

After Fulton’s birth, the Dobbs’ parish, St. Charles Borromeo in St. Anthony, distributed cards with a prayer written by Franciscan Father Andrew Apostoli, who was ordained by Archbishop Sheen and has worked on his canonization cause.

“Your faith needs to get you through the ‘whys,’ not the ‘why me?’ but the why us?'” Burrill, 61, told The Catholic Spirit, newspaper of the Archdiocese of St. Paul and Minneapolis. “I think it would be strange not to have that. But it’s faith that helps you figure that out, or at least try to work through it. I can’t think of two people who were more ready to be parents … than these two.”

Fulton’s difficulties surfaced during Katherine’s 30-week ultrasound, which revealed that he wasn’t growing at a normal rate. Her doctor ordered her to go on bed rest. At 37 weeks gestation, doctors decided to induce labor, and Fulton was born Dec. 24 at 3 pounds, 13 ounces and 17-and-a-half inches.

From the start, Fulton did not eat well and his oxygen levels dropped, so Katherine, 32, and Jeff, 30, had him baptized at the hospital. After about a week, doctors performed genetic tests and Fulton was placed in isolation.

Meanwhile, his newborn screening tests indicated that he had severe combined immunodeficiency, or SCID, involving a disorder that leaves little or no immune response. Commonly known as “bubble boy disease,” the condition leaves those who have it highly susceptible to severe infections. But more tests ruled out SCID, which could have been treated with a bone marrow transplant.

Thus far, every genetic test has come back inconclusive.

While Fulton’s March 2 homecoming was joyous, it brought new challenges. The Dobbses have few visitors, and when they do, guests must wear masks and gloves; Fulton cannot be around children. The couple must wear protective gear at home if they exhibit symptoms of an illness. They can’t take him out in public.

The couple was trained to administer infusions in Fulton’s legs every other week, giving him antibody protection.

Katherine admitted that at first she was even afraid to cry, fearing her tears could kill Fulton because of the germs they contained.

“So, just to think about even more than just one hour at a time was so anxiety-provoking,” she said. “I read all these books on childbirth and nothing has been able to basically be applied to this situation in life. I feel like the Lord is saying, ‘My ways are not your ways,’ and … not to plan the next moment because it’s impossible to plan the next moment. So, just to trust that (God is) going to provide, and receive the graces of the moment.”

Katherine’s love of St. Therese of Lisieux inspired her and Jeff to read Archbishop Sheen’s book, “St. Therese: A Treasured Love Story,” which includes text from talks he gave in 1973 about the French nun. During the last weeks of her pregnancy Katherine researched Archbishop Sheen and listened to his talks “Life is Worth Living” from his 1950s television show.

Her research led to an Illinois woman who shares not only her esteem for the archbishop, but also, at one point, prayers for a baby’s miraculous healing.

Katherine connected with Bonnie Engstrom, who, during a presentation at St. Charles Borromeo March 23, shared the account of the alleged miraculous healing of her newborn son, James Fulton, in 2010 through Archbishop Sheen’s intercession.

“And wouldn’t it be amazing if we had Fulton’s miracle,” Engstrom told the gathering.

Engstrom, 36, grew up 20 miles away from Archbishop Sheen’s birthplace of El Paso, Illinois. While she was familiar with the archbishop for that reason alone, she started to watch videos of him during her pregnancy.

James was stillborn during a home birth. He was rushed to a local hospital, where doctors and nurses worked to revive him. As the doctors began putting their hands up to call his time of death, ‘after 61 minutes of not having a heartbeat, James’ heart started to beat again, and it never stopped again,’ Bonnie said.

Despite the surprise recovery, doctors cautioned that no one goes without a heartbeat for an hour and lives. But the boy survived and is a healthy 7-year-old child today despite medical tests early in life that revealed various serious complications. But they all disappeared and Engstrom credits the intercession of Archbishop Sheen for her son’s recovery.

Doctors subsequently determined the boy’s recovery was a medical miracle. The alleged miracle was submitted to Vatican’s Congregation for Saints Causes through the Diocese of Peoria, which is coordinating the archbishop’s canonization submission. The case is on hold because of a conflict with the Archdiocese of New York, where Archbishop Sheen is buried.

Katherine attended Bonnie’s presentation. She and her family continue to trust in the power of prayer, “that God is in the details, and he’s a good father,” she said.

Katherine acknowledged the family faces a long road to full healing, “but the Lord has given (to) me in prayer before, just that he’s always been there. And so, I know he has been in this, too.”

Trygstad is the assistant editor of The Catholic Spirit, newspaper of the Archdiocese of St. Paul and Minneapolis.