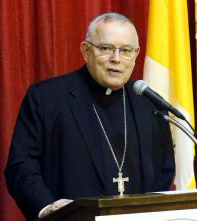 WASHINGTON (CNS) — The Catholic Church’s teaching on marriage, abortion, human sexuality and contraception is rooted in the same respect for human dignity that guides its work for social justice and care for poor people, Philadelphia Archbishop Charles J. Chaput told a Catholic University of America audience.

It is imperative that the church make known why it upholds its teaching, as reiterated in Blessed Paul VI’s 1968 encyclical “Humanae Vitae” (“Of Human Life”), so that Catholics and the world understand God’s plan for humanity, the archbishop said during the April 4 opening session of a symposium marking the 50th anniversary of the papal teaching.

The encyclical is notably known for upholding church renouncement of contraception. It followed by eight years the 1960 U.S. Food and Drug Administration approval of the first birth control pill.

Blessed Paul’s decision has been widely criticized, Archbishop Chaput acknowledged, with some Catholic clergy, theologians and laypeople refusing to accept it. “That resistance continues in our own day,” said the archbishop, who chairs the U.S. Conference of Catholic Bishops’ Committee on Laity, Marriage, Family Life and Youth. He made the comments in a 35-minute presentation to about 200 people.

“‘Humanae Vitae’ revealed deep wounds in the church about our understanding of the human person, the nature of sexuality and marriage as God created it,” he explained. “We still seek the cure for those wounds. But thanks to the witness of St. John Paul II, Pope Benedict, Pope Francis and many other faithful shepherds, the church has continued to preach the truth of Jesus Christ about who we are and what God desires for us.

“People willing to open their eyes and their hearts to the truth will see the hope that Catholic teaching represents and the power that comes when that truth makes us free,” he said.

The archbishop challenged widespread denunciation of the teaching on contraception by those who say church leaders spend too much time on “pelvic issues,” thus obscuring, they argue, the Gospel message of caring for poor people.

“As a bishop for 30 years in the dioceses where I served, that’s three of them, the church has put far more money, time and personnel into the care and education of the underprivileged than into programs related to sex,” he said.

“And it’s not that the critics don’t know this. Many don’t want to know it because facts interfere with their story line of a sexually repressed, body-denying institution locked in the past.”

Church teaching on contraception can be traced to the early days of Christianity, particularly in ancient Rome, where Christians emphasized upholding human dignity, he said.

Citing the work of Kyle Harper, provost at the University of Oklahoma and an expert in Roman history, the archbishop said the Romans “presumed that sex was just sex, one instinctual need among others” and that prostitutes and slaves were “safety valves” to satisfy such needs. But it was the early Christians who “welcomed all new life as something holy and a blessing,” teaching that each person was created in the image and likeness of God, he explained.

Christians also preached that God gave all people free will to act in accordance with God’s commands or against them, he said, continuing to cite Harper.

“Christianity embedded that notion of free will in human culture for the first time. Christian sexual morality was a key part of this understanding of free will. The body was a ‘consecrated space’ in which we could choose or reject God,” he said.

As a result, Christians began demanding “care for vulnerable bodies,” speaking out against slavery and supporting the needs of poor people, and that concern included opposition to contraception, he said.

Archbishop Chaput noted that Christian opposition to contraception continued until the 1930 Lambeth Conference of Anglican bishops, which determined that while the preferred method of avoiding birth should be sexual abstinence, other methods may be used to prevent pregnancy as long as they fell in line with Christian principles.

“Their minor tweak gradually turned into a full reversal on the issue of contraception. Other Christian leaders followed suit,” he said.

“Today this leaves the Catholic Church almost alone as a body of Christian believers whose leaders still maintain the historic Christian teaching on contraception,” he continued. “The church can thus look stubborn and out of touch for not adjusting her beliefs to the prevailing culture. But she’s simply remaining true to the faith she received from the apostles and can’t barter away.”

Since then, Archbishop Chaput said, “developed society has moved sharply away from Christian faith and morals, without shedding them completely.”

He echoed author G.K. Chesterton, who asserted that society is surrounded by “fragments of Christian ideas removed from their original framework and used in strange new ways. Human dignity and rights are still popular concepts, just don’t ask what their foundation is or whether human rights have any solid content beyond sentiment or personal preference.”

“Our culture isn’t reverting to the paganism of the past. It’s creating a new religion to replace Christianity. It’s that we understand that today’s new sexual mores are part of this larger change.”

The moral conflicts society faces, such as broken families, social unraveling and “gender confusion” stems “from our disordered attitudes toward creation and our appetite to master, reshape and even deform nature to our wills. We want the freedom to decide what reality is. And we insist on the power to make it so,” he said.

Such thinking is manifest in efforts to master the limitations of the human body and “attack the heart of our humanity,” the archbishop added.

Blessed Paul explains that “marriage is not just a social convention we’ve inherited, but the design of God himself. Christian couples are called to welcome the sacrifices that God’s design requires so they can enter into the joy it offers. This means that while husbands and wives may take advantage of periods of natural infertility to regulate the birth of their children, they can’t actively intervene to stamp out the fertility that’s natural to sexual love,” he said.

Because the church’s teaching often was not being followed prior to the encyclical, Archbishop Chaput said Blessed Paul offered four predictions if that trend continued: widespread infidelity and the general lowering of morality; loss of respect for women as they become viewed as instruments of selfish enjoyment rather than as beloved companions; public policies that advocate and implement birth control as a form of population policy; and humans thinking they had unlimited dominion over their own bodies, turning the person into the object of his or her own intrusive power.

“Half a century after ‘Humanae Vitae’ the church in the United States is at a very difficult but also very promising moment,” the archbishop said. “Difficult because the language of Catholic moral wisdom is alien to many young people, who often leave the church without every really encountering her. Promising because the most awake of those same young people want something better and more enduring than the emptiness and noise they now have.

“Our mission now, as always, is not to surrender to the world as it is, but to feed an ennoble the deepest yearnings of the world and thereby to lead it to Jesus Christ and his true freedom and joy.”

NEXT: Catholic leaders react to Trump’s plan to send National Guard to border