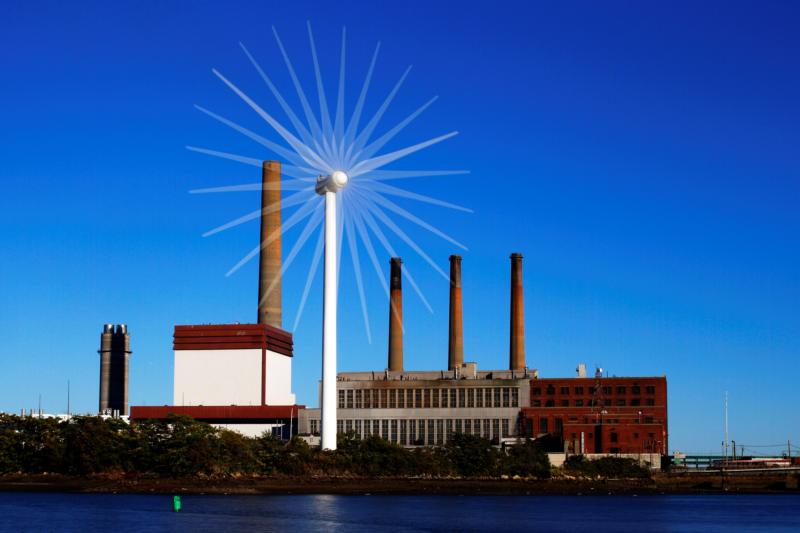 A wind turbine turns in front of a fossil fuel power plant in Charlestown, Mass., in this 2013 file photo. Catholic institutions are planning to divest part of their financial portfolios from the fossil fuel industry because of its impact on climate change. (CNS photo/Brian Snyder, Reuters)

WASHINGTON (CNS) — Caritas Internationalis, the Catholic Church’s worldwide network of humanitarian aid agencies, three German banks and more than 30 other Catholic institutions are planning to divest at least part of their financial portfolios from the fossil fuel industry.

The divestment announcement by the Global Catholic Climate Movement April 22, Earth Day, is part of a continuing campaign to convince Catholic entities to move investments to renewable energy enterprises.

“This announcement is the result of many months of hard work. Our team has been working pretty hard raising awareness. I think there is so little understanding about the fossil fuel industry being at the core of the environmental crisis,” he said.

The divestment campaign also falls in line with the message of Pope Francis’ 2015 encyclical on the environment, “Laudato Si’, on Care for Our Common Home,” Insua explained.

“It’s just unacceptable to treat the fossil fuel industry as just another industry, he added. “The call of Laudato Si’ to move away from fossil fuels is crystal clear.”

Desmond Wilson, chief financial officer at The Catherine Donnelly Foundation in Toronto, told CNS the divestment decision falls in line with the organization’s ties to the religious community.

“We came to understand that there were moral and ethical issues in play here,” Wilson said, explaining that the world’s poorest people are most affected by a changing climate. “If climate change is caused by the action of humans, we have a responsibility to reflect on that and take some measures to keep that threat under control.”

While its fossil fuel investments totaled just $1 million in a $45 million portfolio, Wilson said the foundation felt it was important to adhere to its Catholic roots.

“Eventually we came to understand cigarettes, tobacco, was a harmful product. It’s the same sort of thing with fossil fuels. We see more and more that it is a harmful product in the way it affects climate,” he explained.

Three German Catholic banks, with more than $9.2 billion in holdings, are among the divesting institutions: Pax-Bank, Bank im Bistum Essen and Steyler Ethik Bank. Pax-Bank said it was partially divesting while the others announced they were pulling investments from coal companies.

“In view of the progressing climate change and its social consequences, we consider the exploitation of fossil fuel for their incineration as a threat to the common good,” spokesman Alfred Krott wrote in an email to CNS. “We want to promote renewable energy and exclude companies that mine hard coal or lignite (soft coal), peat, oil and natural gas.”

The cardinal encouraged members of the humanitarian aid network and other church organizations “to do the same.”

Archbishop Jean-Claude Hollerich of Luxembourg, president of the Commission of the Bishops’ Conferences of the European Community, said bishops were joining other Catholic institutions in “making financial decisions that are in line with our moral values.”

“Divestment is an important way for the church to show leadership in the context of a changing climate,” he said in a statement. “Praise be to all those who service ‘the least of these’ by protecting the environment.”