As South Sudan war drags on, churches do their best to help displaced 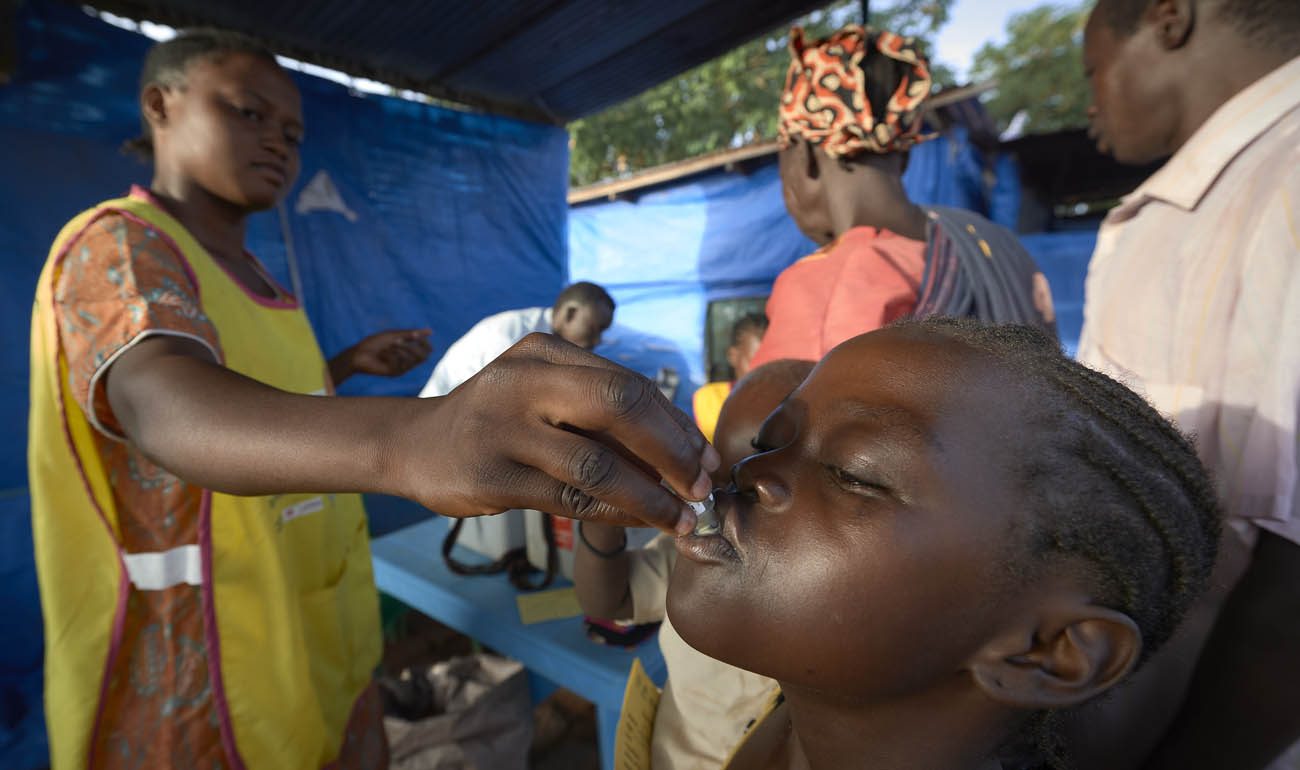 A child swallows an oral cholera vaccine at a displaced persons camp at the Holy Family Catholic Church in Wau, South Sudan, April 17. The church has provided food, shelter material and health care, and the presence of clergy and religious has fostered a sense of relative safety for the families who first occupied the church grounds when fighting enveloped the city in 2016. (CNS photo/Paul Jeffrey)

WAU, South Sudan (CNS) — In a land where traditionally you’d look for a steeple and a cross to identify a church, today in South Sudan you’re just as likely to find a church by looking for a collection of dirty, tarp-covered rustic huts, where the internally displaced have sought refuge from the country’s seemingly incessant fighting.

Father Marko Mangu lives in the middle of such a jumble of precarious shelters. As diocesan coordinator for the Diocese of Wau, Father Mangu lives on the grounds of the Cathedral of St. Mary, where almost 10,000 internally displaced people — no one knows an exact number — continue to find refuge. That number is down from the height of the violence in 2017, when more than 16,000 people sought safety inside the compound’s crumbling walls, but priestly privacy is still just a memory.

“It’s a challenge to live here. The problems are endless. You either have to be a priest or someone extremely committed to the people, or you will get tired and quit,” Father Mangu told Catholic News Service.

Since civil war began to rip apart South Sudan’s fragile democracy in 2013, roughly one-third of the country’s 12 million people have been forced to flee their homes. In Wau, Father Mangu said the national conflict took on starkly ethnic overtones when soldiers of the Sudan People’s Liberation Army, mostly members of the dominant Dinka tribe, attacked a mixture of local opposition groups and members of other ethnic communities in 2016. More than 400 people were killed and some 120,000 had to seek refuge in churches and a nearby United Nations base, as soldiers looted and burned many local communities.

Father Mangu said things are much calmer now, as most of the SPLA soldiers have been transferred out, replaced by national security troops who wear a different color uniform and who church officials say are generally trusted by the local population. He blamed the former head of the SPLA, Paul Malong, for sending what the priest dubs “Malong’s militias” to Wau.

“They were not real soldiers. They just picked them up in the villages, trained them for a few days, gave them a gun and set them loose,” he said.

Malong was fired last year and later abandoned the country. On April 10, he announced from exile that he was forming a new opposition party, the South Sudan United Front. More than 40 different armed groups operate in the country today, making regionally supervised peace talks even more complex and difficult. A resumption of negotiations scheduled for April 26 in Ethiopia have been indefinitely postponed.

The peace process was dealt a further body blow by the death April 20 of Gen. James Ajongo, Malong’s successor as head of the military. He reportedly died in Cairo after a short illness.

As the peace process stalls, Father Mangu said the new national security troops in Wau are well-disciplined and come from a variety of tribal backgrounds, thus ratcheting down tension in the city.

“None of them moves with guns unless they are on duty. And if national security finds you stealing someone’s roof, they will arrest you. If you resist, they will shoot you. They have shot many soldiers who they caught stealing roofs,” he said.

There aren’t yet enough national security forces to go around, however.

“They are training more, and as soon as they’re ready, they’ll be sent to more villages around here so that people will feel more secure about returning home. We cannot tell people to go back home if we’re not sure that they will be safe,” said Father Mangu.

Angelina Polu, a member of the Balanda tribe, says her son was killed by SPLA soldiers. She lives on the cathedral grounds with her grandson.

“I want to go home, but there are too many guns out there. And my house is gone. The Dinkas took it,” she said.

In the meantime, conditions in the cathedral compound — and at three other Catholic churches that host the displaced in Wau — remain worrisome.

“We are afraid of outbreaks of meningitis and measles and other contagious diseases in the camps,” Father Mangu said. “And even if we keep those problems at bay, it is not a good situation to be crowded together like this. If you’re a big boy, to be in the same room with your mother-in-law and your grandmother is not acceptable. It’s not our African culture. But people are forced to live like this. To stay alive they have to be there. They ran from danger. They saw their friends and family slashed and killed. So although life is difficult, it is better to face the challenges here than to return to a dangerous situation where you can lose your life.”

Some 250 miles to the south, Father Victor Babie also lives surrounded by the internally displaced. As the priest in Riimenze, a once-sleepy village near the border with Congo, he’s also the de facto mayor of 7,030 displaced people — he knows the exact number — who continue to seek safety in the shadow of the church. With help from groups like Solidarity with South Sudan and the Catholic Medical Mission Board, he provides water, food, medical care, education and hope to the community.

“Life is better than last year. People can walk two kilometers from here without being attacked,” he said. “But they’re afraid to go much farther. If they go back to their villages, the soldiers will accuse them of sympathizing with the rebels. So they stay close to the church, where they feel safe. But because they can’t travel to their fields to plant and harvest, they can’t feed themselves. It falls on the church, with help from the United Nations and NGOs, to find them food.”

For Father Babie, being a priest means standing up for his flock.

“Many times I have to face groups and tell them the people here aren’t part of the conflict and should be left alone,” he said. “But they keep coming back to loot and beat the people.”

Father Babie said government troops in the area have not been paid for seven months.

“So they have to loot to survive. They take food, money, phones, radios, solar panels, bikes, anything of value. They call it patrolling, but it’s really looting,” he said.

On April 3, residents say, soldiers took a man from the settlement to a command post a kilometer away and beat him for more than two hours, trying to elicit a confession that he was a rebel collaborator. When people advised Father Babie, he went running.

“The commander was angry, and the soldiers were repeatedly cocking their guns, but I argued with them and they finally released the man,” the priest said. “I honestly thought it would be my last day. I was afraid. But God is our strength, and my fear has to be less than the people’s fear, otherwise I wouldn’t be able to defend them when they’re threatened.”

PREVIOUS: Italy grants citizenship to Alfie Evans in attempt to guarantee his care