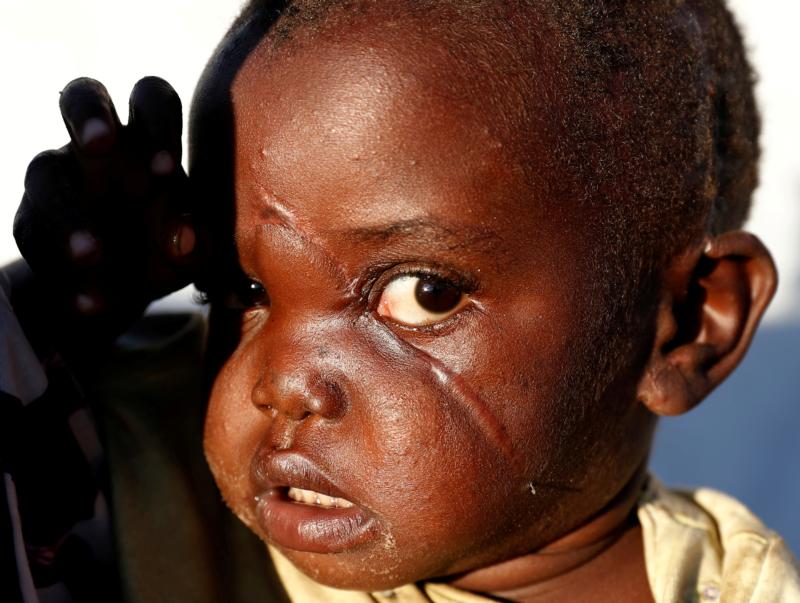 Rachele-Ngabausi, 2, who was injured by militiamen when they attacked his village in Tchee, Congo, looks at the photographer April 9 at a camp for displaced people in Bunia. Civilians in eastern Congo have been brutalized by militias, rebels and military units. (CNS/Goran Tomasevic, Reuters)

U.N. radio in Congo reported April 9 that Father Etienne Nsengiunva, a priest in Kitchanga, was shot at point-blank range April 8.

Father Emmanuel Kapitula, vicar of the parish in Kitchanga, said an armed man entered the room where Father Nsengiunva was eating with parishioners.

“An armed man entered his house, pointed a gun at him and shot several times, killing him instantly. Those who were sharing the meal … could not believe it,” said Father Kapitula.

Father Kapitula has asked the government to protect the people.

”We demand that investigations be done, that culprits be punished,” he added.

Fides, news agency of the Congregation of the Evangelization of Peoples, reported that villagers from Bunyangula found Father Ngango blindfolded, although he appeared otherwise unharmed. The Congolese bishops’ conference told Fides that he would receive standard medical tests as a precaution.

Local authorities said that ultimately Father Ngango’s release was secured by pressure from the local villagers despite an initial search party turning up no evidence of the priest’s whereabouts.

Father Ngango was the sixth priest abducted in the eastern Congo since 2012 and one of the few abductees in the region to be released. Civilians in eastern Congo have been brutalized by militias, rebels and military units. Thousands of women have been raped by the armed groups. Analysts say competition for mineral resources is the key factor fueling the violence, but recently succession politics added to the troubles.