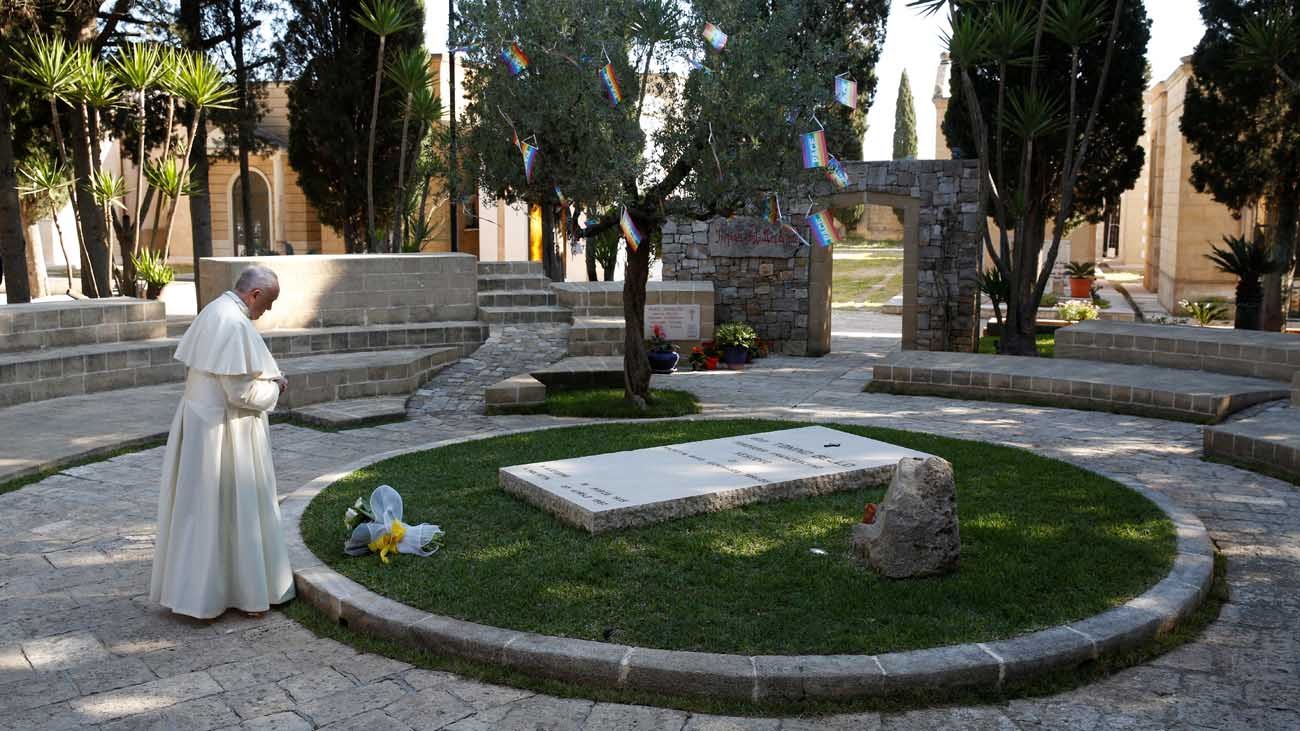 Pope Francis prays in front of the grave of Bishop Antonio Bello of Molfetta during his pastoral visit in Alessano, Italy, April 20. (CNS photo/Max Rossi, Reuters)

VATICAN CITY (CNS) — The church needs courageous men and women like Italian Bishop Antonio Bello of Molfetta, who imitated Jesus’ closeness to the poor and the downtrodden, Pope Francis said.

Visiting the birthplace of the beloved bishop affectionately known as “Don Tonino,” the pope said Bishop Bello’s life and ministry “remind us to not theorize closeness to the poor but to be close to them as Jesus did.”

“Don Tonino did not do this because it was convenient or because he was seeking approval, but because he was moved by the Lord’s example. Out of love for him, we find the strength to rid ourselves of the garments that get in the way so that we can dress ourselves in service, to be ‘the church of the apron, which is the only priestly vestment recorded in the Gospel,'” he said April 20.

Pope Francis arrived in the morning by helicopter in the town of Alessano, located in the southern Italian province of Lecce, where Bishop Bello was born and buried.

Landing near the town’s cemetery, the pope carried a bouquet of white lilies and yellow sunflowers and laid them in front of the bishop’s tomb. Surrounded by palm trees and an olive tree adorned with rosaries and multicolored peace flags, Pope Francis spent nearly five minutes praying silently. He also prayed in front of the tomb of the bishop’s parents, who were buried nearby.

Born in 1935, Don Tonino spent his first years of priestly ministry as vice rector of a seminary while collaborating with the Catholic charitable organization, Caritas. After he was named bishop of Molfetta in 1982 by St. John Paul II, Bishop Bello not only served the poor of his diocese but also worked to promote peace, often rallying against wars in the Persian Gulf and Bosnia-Herzegovina.

He served as president of Pax Christi Italy, an international peace movement, until his death of stomach cancer in 1993. The Vatican approved the opening of Bishop Bello’s sainthood cause in 2007.

Standing in front of an image of the bishop, the pope said Bishop Bello did not remain “with his hands in his pockets” but worked tirelessly to promote peace “with the conviction that the best way to prevent violence and every kind of war meant taking care of the needy and promoting justice.”

“If war generates poverty, poverty also generates war. Peace, therefore, is built starting from the home, the streets, the shops where communion is handcrafted,” he said.

Despite Don Tonino’s rank of bishop, the pope said, he had a “healthy allergy toward titles and honors” and instead chose to free himself “from the signs of power to make way for the power of signs.”

“Let us imitate Don Tonino, let us allow ourselves to be transported by his youthful Christian zeal, let us listen to his urgent invitation to live the Gospel without concession. It is a strong invitation given to each one of us, individually and as a church,” he said.

After speaking to the people of Alessano, Pope Francis boarded a helicopter to Molfetta, where he celebrated an outdoor Mass in the diocese Bishop Bello served for nearly 10 years.

In his homily, Pope Francis recalled the bishop’s devotion to the Eucharist and the word of God.

Christians who are nourished by the Eucharist “also share the Lord’s mentality and, upon leaving Mass, are called to “no longer live for themselves but for others.”

Bishop Bello, he said, “dreamed of a church hungry for Jesus and intolerant of all worldliness, a church that ‘knows how to perceive the body of Christ in the uncomfortable tabernacles of misery, suffering, loneliness.'”