Seminarians mix it up with area young adults for Frisbee fun 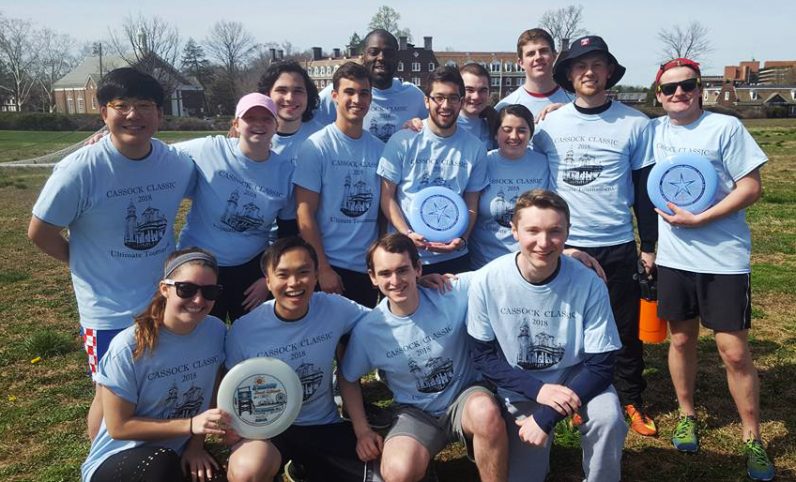 On most days, one might expect the atmosphere of a seminary to be more solemn and reflective than alive with the sounds of laughter and cheers. But seminarians are, in most cases, college-aged men with many of the same interests as anyone else their age.

They want to enjoy nice weather, socialize with their peers and enjoy some good natured competition. That’s what the seminarians of St. Charles Borromeo Seminary experienced April 21 in the Cassock Classic, an Ultimate Frisbee tournament on the spacious campus in Wynnewood.

The tournament has become very popular among local young adults and seminarians such as Greg Miller from Sacred Heart Parish in Royersford. He has participated for four years and worked as the seminarian organizer of the event for the past three years.

“It’s a good time for Catholic young adults to get together and see that there’s a community of us and get to know each other while playing a fun sport,” he said.

This desire for fellowship with their flocks of the future was what inspired Father Stephen DeLacy, archdiocesan vocations director, to launch the tournament five years ago.

“The idea first occurred to me when I was still the chaplain at Pope John Paul II (High School) and the chaplain for the Metanoia young adult group,” he said. “I wanted to organize an Ultimate Frisbee tournament just to get young adults together, so it was very natural when I first became the vocation director to bring that idea to the seminary and have young adults come on campus to give them exposure to the beauty of the seminary,” he said, and to “have the seminarians get to know the young adult groups and hopefully become active members.”

“It’s a really fun day,” said DiBello, who is back for her second year. “I really enjoy hanging out with the different young adults in the area and playing some Frisbee together.” 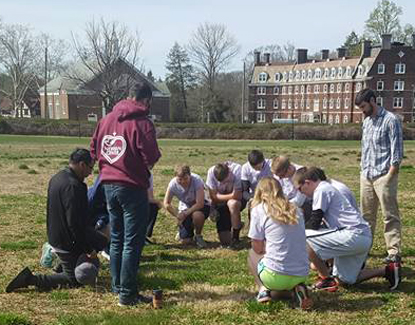 Seminarians and their young adult guests pray for a moment together before a Frisbee game in the Cassock Classic.

She explained a new wrinkle to the tournament this year. Instead of two teams of seminarians competing against all others, now “they’re having one seminarian team and the rest of the seminarians are dispersed. Each team gets one or CYACCtwo seminarians added on so they can mingle a little bit more with the young adult groups,” DiBello said.

This shake up of the teams had another purpose as well. Ultimate Frisbee is a favorite of the seminarians and their team has a reputation for dominance. It’s not all about winning, of course. Spirit and fellowship are just as important. But it never hurts to get a trophy and some attendees were interested in doing so.

“Do they still have the toilet bowl?” asked Eddie Fite of Our Lady of Perpetual Help Parish in Morton, referring to the trophy given to the most “spirited” team. “I totally would love to win it.” Fite and DiBello are both members of the Catholic Young Adults of Chester County (CYACC), which meets weekly in West Chester with social nights, discussions on Catholic issues, and informative Catholic history nights.

Awards aside, the Cassock Classic is really about Catholic fellowship and having a good time. “It’s a ton of fun,” says Matthew Timek of Corpus Christi Parish in Lansdale. “It’s beautiful weather, we’re at the amazing grounds here at St. Charles, it’s hard to complain. With a lot of friends, good fellowship, and it’s all centered on God, so what could be better?”

Timek is a member of Metanoia, a young adult group centered in Montgomery County. Metanoia conducts a number of events from Theology on Tap discussions, Theology of the Body sessions, and social events.

The Cassock Classic is held each year in April and groups from all around the Archdiocese of Philadelphia attend, including the West Chester Newman Center group and many more. Organizers are always looking for new groups to join in the fellowship and enjoy a Christ- centered day of fun and games. 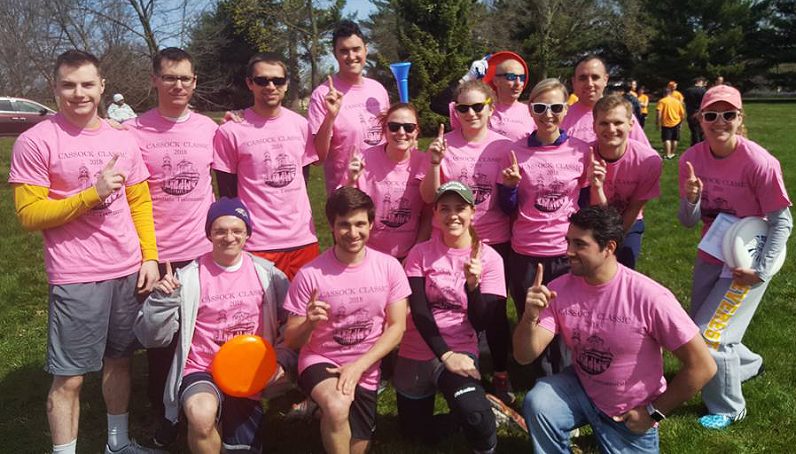 NEXT: Young adults say encuentro process ‘lighting a fire’ in people of faith