Catholics get chance to celebrate, think about Mary with new feast day 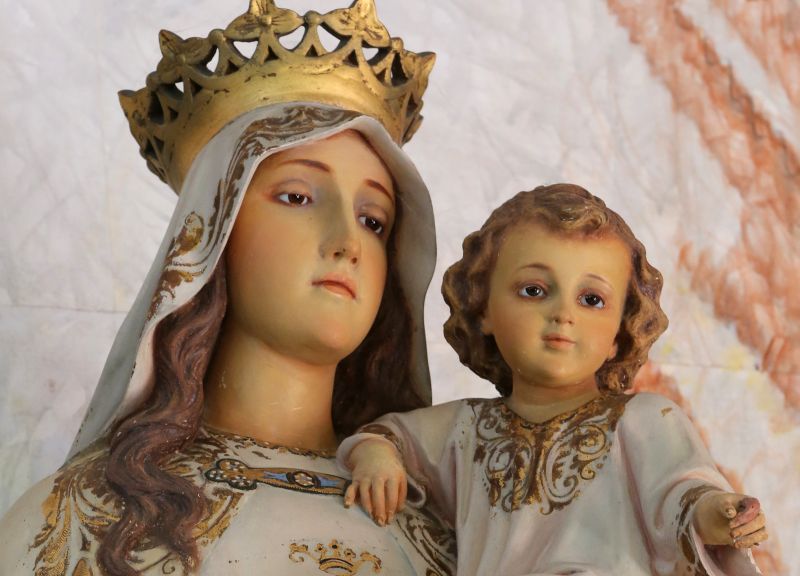 A statue of Mary and the Christ Child is seen in 2017 at St. Rafael the Archangel Church in Quebradillas, Puerto Rico. Mary, Mother of the Church ia celebrated this year the Monday after Pentecost.  (CNS photo/Bob Roller)

WASHINGTON (CNS) — The Catholic Church doesn’t often add new celebrations to its pretty full liturgical calendar, but this year’s new feast day, Mary, Mother of the Church on May 21, has Catholics gearing up to mark the day or at least think a little more about Mary.

The new feast day, which will be celebrated annually the day after Pentecost, was announced in a March 3 decree by the Congregation for Divine Worship and the Sacraments. The decree said the pope approved the celebration because he thought it might “encourage the growth of the maternal sense of the church in the pastors, religious and faithful, as well as a growth of genuine Marian piety.”

That line struck Father Chuck Barthel, pastor of Mary, Mother of the Church Parish in St. Louis, when he first read it and he has continued to go back to it as he considers the feast with particular significance for his parish.

Gaining a renewed and deeper understanding of Mary’s nurturing and caring side is something he said the church, especially in today’s climate, could certainly use.

His parish is one of a handful of churches in the U.S., along with a Benedictine Abbey in Richmond, Virginia, named Mary, Mother of the Church. For this year’s celebration of the new feast day, the St. Louis church is not planning anything big, but plans to celebrate on the actual day — when he said parishioners can “enjoy each other’s company” — not during Pentecost weekend when there is already a lot going on.

The pastor said he hopes to give parishioners a prayer card for the occasion and the parish will host a hospitality event after the morning liturgy and will have evening prayer that night followed by dessert.

The parish — where Father Barthel was initially assigned more than 28 years ago as an associate pastor and now has returned less than a year ago — was founded in 1971 and initially was staffed by Redemptorist priests. The parish, which opened so soon after the Second Vatican Council, took its name from the title given to Mary by Blessed Paul VI in 1964.

Gloria Falcao Dodd, director of academic programs for the International Marian Research Institute at the University of Dayton, Ohio, wrote a paper about this Marian title in 2006. Her research shows that a bishop in the 1100s called Mary, Mother of the Church and Pope Leo XIII’s encyclical on the rosary said that Mary at Pentecost was “in very truth, the mother of the church, the teacher and queen of the apostles.”

And in 1981, the title “Mother of the Church” was given another boost when St. John Paul II had a mosaic commissioned for the outside wall of his papal apartment called “Mater Ecclesiae” (“Mother of the Church”) in gratitude for his recovery after being shot in St. Peter’s Square. Then, and other times, the pope spoke of Mary as a mediator, or someone who intercedes for us, said Falcao Dodd.

That idea of Mary interceding for the church, as a mother does for her children, is important for Catholics to consider, especially as this new feast falls so soon after Mother’s Day, said Falcao Dodd. She also said it is key to understand its placement right after Pentecost, noting that at the time of the original Pentecost, Mary “did what a mother would do — she prayed with and for her children in the upper room.” And at Jesus’ crucifixion, when he publicly announced to the disciple John, “behold your mother” about Mary. John, symbolizes all of us, the church, Falcao Dodd said.

Auxiliary Bishop Gerard W. Battersby of Detroit said Mary’s presence at the foot of the cross and with the early church at Pentecost, is an example of what it means to be a disciple.

“I think this is a time of special grace,” the bishop told Catholic News Service May 2, noting that Mary’s job has always been to point to Jesus.

The Detroit Archdiocese is celebrating the new feast day with a May 21 Mass at Old St. Mary’s Catholic Church in Detroit concelebrated by Bishop Battersby, Bishop Donald F. Hanchon, another Detroit auxiliary bishop, and several archdiocesan priests. After Mass, there will be a May Crowning and procession through the streets with a statue of Mary carried by Catholic school students.

In some parts of the world this feast day isn’t new. The church calendars of Poland, Argentina, St. Peter’s Basilica and some religious orders have already set aside the Monday after Pentecost as the feast of Mary, Mother of the Church.

When Father Barthel thinks about another day to honor Mary, he said he is reminded of the hospital ministry he did as a seminarian when a patient who was Episcopalian asked him if it was OK if she prayed to the Blessed Mother.

She said her reason for doing this, which the priest has never forgotten years later, was: “Sometimes you just need a woman to talk to.”