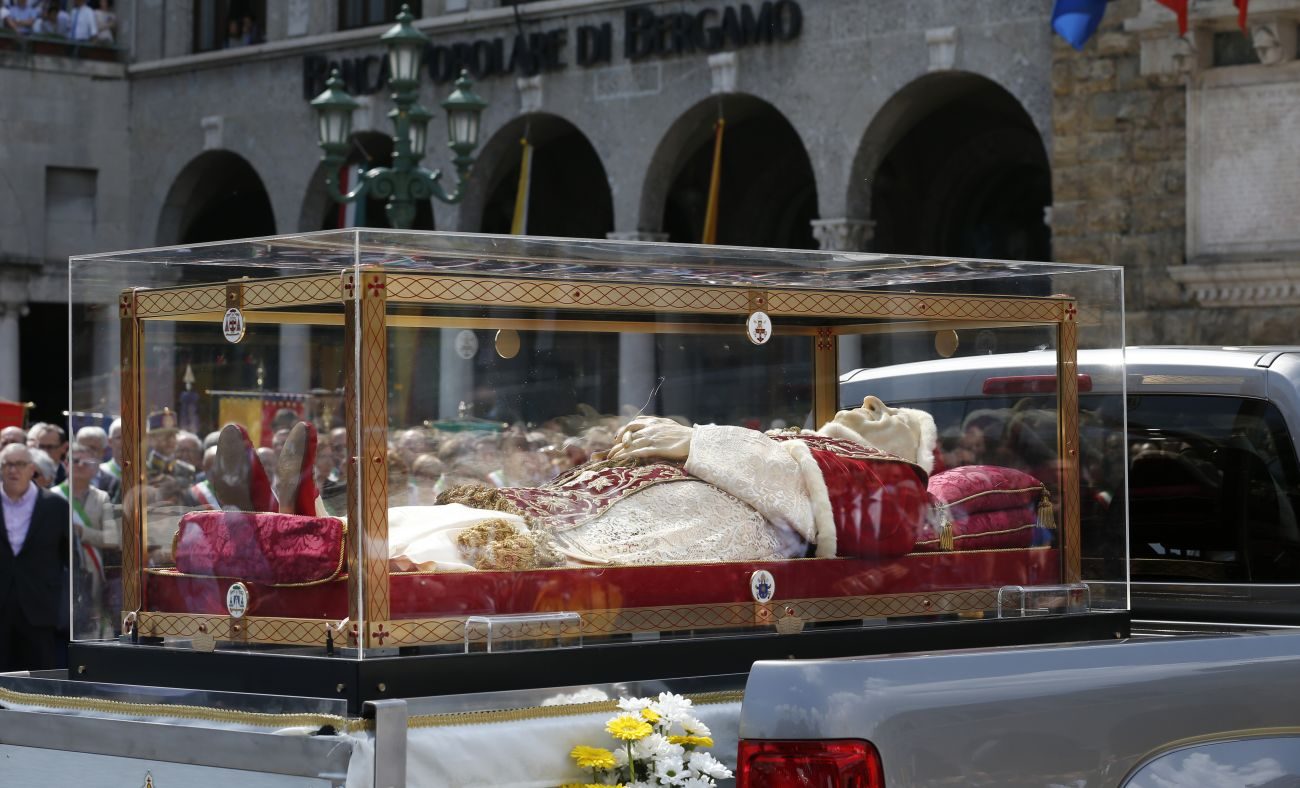 The coffin containing the body of St. John XXIII is seen during a ceremony in Vittorio Veneto Square after its arrival in Bergamo, Italy, May 24. The body of the late pope left the Vatican early May 24 to be displayed in his home region until June 10. (CNS photo/Paul Haring)

BERGAMO, Italy (CNS) — Accompanied by Bishop Francesco Beschi of Bergamo and escorted by both Italian and Vatican police officers, the glass coffin containing the body of St. John XXIII left the Vatican early May 24 for a 370-mile drive to Bergamo.

The route taken for the trip north was kept secret for security reasons.

When the procession reached Bergamo’s central Vittorio Veneto Square, Bishop Beschi told thousands of people gathered there that it was “with great joy and emotion that I accompanied to our diocese, our city, the urn with the mortal remains — now relics — of John XXIII, which return for a few days to the land of his birth.”

St. John, who opened the Second Vatican Council, was born Nov. 25, 1881, in Sotto il Monte, a town near Bergamo. After his ordination as a priest and years of service in the Vatican diplomatic corps, he was appointed patriarch of Venice in 1953. He was elected pope Oct. 28, 1958, and died five years later.

Maria Calagari was in the square with her sister and some friends to welcome St. John’s remains.

In connection with the pilgrimage of St. John’s relics, Pope Francis gave an interview to L’Eco di Bergamo, the area’s main daily newspaper, which is owned by the Diocese of Bergamo.

In the interview, Pope Francis described St. John as “a saint who did not know the word ‘enemy,'” but “always sought what would unite people.”

For St. John, he said, “the church is called to serve human beings, not just Catholics, and to defend always and everywhere the rights of the human person and not just of the Catholic Church.”

Pope Francis said the pilgrimage was meant to be “a gift and an occasion” to renew one’s faith and to remember the great pope. It is a special opportunity for the elderly, the sick and the poor, who have not been able to go to St. Peter’s Basilica to pray at his tomb.

The visit to the Diocese of Bergamo included a stop at the city’s prison, where 180 prisoners — including 35 Muslims — asked permission to enter the internal courtyard where a truck carrying the remains was to stop.

The prison yard was the first place in Bergamo where people were allowed to touch the glass coffin. The prisoners were given a square of either yellow or white fabric to touch to the glass; most of them touched the glass with their hands, then used the fabric to wipe the glass clean.

Vincenza, one of the inmates, told the local television station that it was amazing to have the saintly pope’s remains stop in the prison at the beginning of the pilgrimage “because usually, especially for important events, prisoners are the last ones people think about.”

From the prison, the relics were to be driven to the diocesan seminary named after Pope John XXIII. The priests of the diocese were to escort the remains to the cathedral later in the day.

Teens and young adults of the diocese planned a prayer vigil in the cathedral May 25, and the remains were also to be present the next morning as new priests were ordained for the diocese.

After a Mass with the poor May 27, the body was to be moved to the hospital named after the late pope, then transferred to the Shrine of St. John XXIII in Sotto il Monte.

Pilgrims can pray before the saint’s remains at the shrine until June 10, when Cardinal Pietro Parolin, Vatican secretary of state, will celebrate Mass and the body will be returned to the Vatican.

Cardinal Angelo Comastri, archpriest of St. Peter’s Basilica, told Vatican Media that “this is the first time — it’s never happened before — that the remains of a pope make a return visit to his home, to his roots.”

NEXT: Nicaraguan bishops end role as mediators in national dialogue