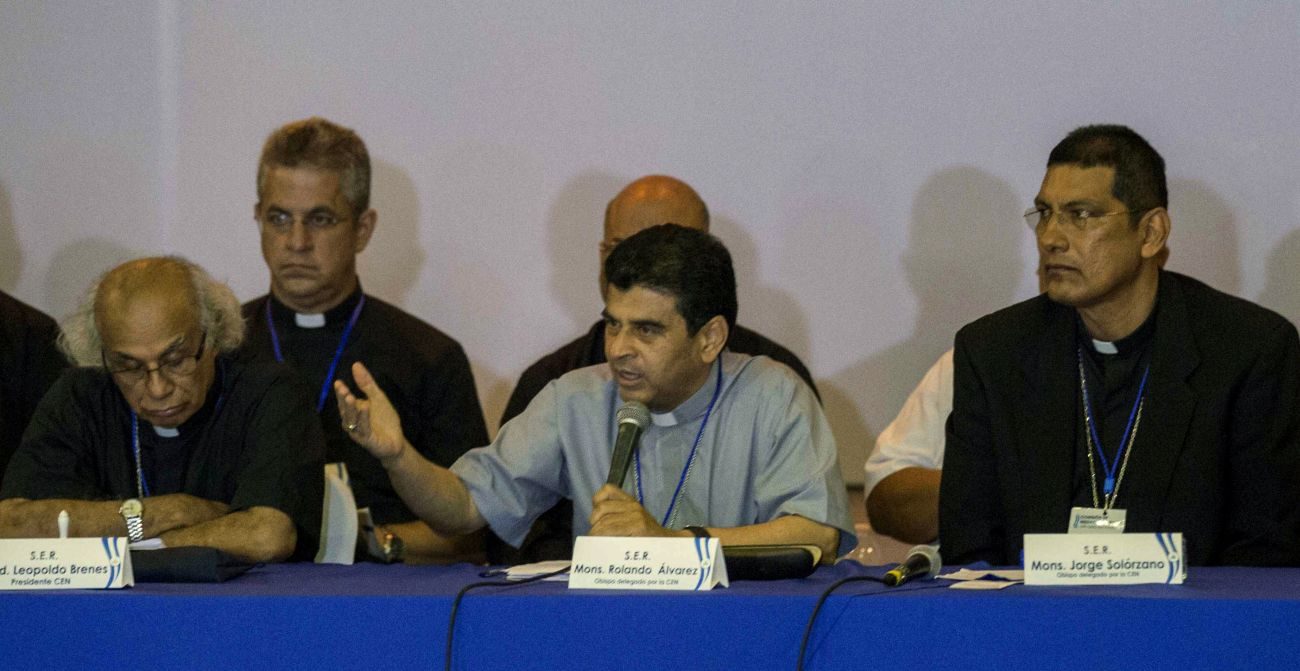 Bishop Rolando Alvarez Lagos of Managua, Nicaragua, speaks alongside Cardinal Leopoldo Brenes Solorzano, left, during a second session of the national dialogue in Managua. Nicaragua's bishops have suspended their participation as mediators, citing a "lack of consensus among the parties" on resolving the political crisis engulfing the Central American country. (CNS photo/Jorge Torres, EPA)

MEXICO CITY (CNS) — Nicaragua’s bishops have suspended their participation as mediators and witnesses in a national dialogue, citing a “lack of consensus among the parties” on resolving the political crisis engulfing the Central American country.

The bishops announced the suspension of talks May 23 and said a six-person commission would continue to seek a solution, even as protests engulf the country and police and paramilitary groups attack civilians, who are demanding democracy and opposing what they consider authoritarian rule by President Daniel Ortega.

“As pastors of the Catholic Church, in service to the truth, fellowship and justice, we feel the need to remind (people) that the peace of our country and the lives of many Nicaraguans depends on this decision and the possibility of continuing this dialogue,” the bishops’ mediation and witness commission said in a May 23 statement.

“We’re putting out a call to all media and social networks to please stay on the side of truth, and foster a respectful environment that aids further dialogue, avoiding attacks, disqualifications, and threats that damage dignity, reputation, body, and morale of those who are participating in the dialogue.”

Unrest broke out in Nicaragua after the Ortega government tried to reform the country’s social security system and increase fees, amid accusations of corruption and mismanagement. Protests, especially among students, have continued as the government cracks down on dissent and puts restrictions on the media.

The feeling among many Nicaraguans opposed to the government, said Brian Strassburger, an American Jesuit scholastic, “is that there is no room for protest.”

Nicaragua has recorded at least 76 deaths and 868 people injured since April 18, according to a report from the Inter-American Commission on Human Rights. At least 600 students were attacked by riot police in the Managua cathedral, according to the commission.

The country’s bishops have tried to mediate a solution to the crisis and convened the national dialogue.

Representatives of the Civic Alliance for Justice and Democracy, which includes groups opposed to the government, proposed reforming Nicaragua’s political system, holding early elections and creating an international commission to investigate the violence occurring in the country.

Representatives of the government called that proposal a “coup.”

“It was impossible to continue with the National Dialogue,” Auxiliary Bishop Silvio Jose Baez of Managua tweeted. “The bishops made it clear from the beginning, the objective of the national dialogue was to pave the way for the democratization of Nicaragua.”

NEXT: Italian nun murdered in Somalia to be beatified in Italy