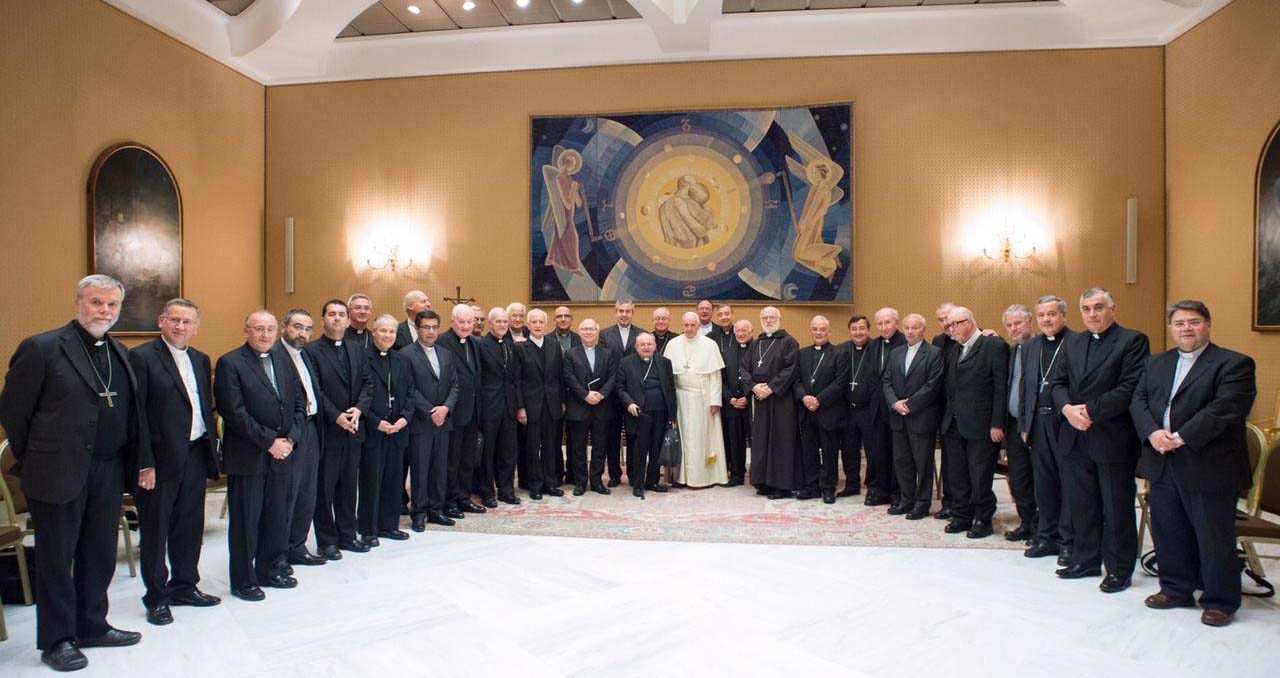 Pope Francis poses for a photo with Chilean bishops at the Vatican May 17. (CNS photo/Vatican Media)

VATICAN CITY (CNS) — After several days of private meetings with Chilean bishops, Pope Francis called on them to build a “prophetic church” that places care for the suffering, especially survivors of sexual abuse, at its center.

In a letter given to the bishops and released by the Vatican May 17, the pope thanked the bishops for accepting his invitation to discuss “the serious acts that have damaged ecclesial communion and weakened the work of the church in Chile in recent years.”

“In light of these painful events regarding abuses — of minors, of power and conscience — we have delved into the seriousness (of the abuses) as well as the tragic consequences they have had, particularly for the victims,” the pope said.

The bishops met at the Vatican May 15-17 to discuss with Pope Francis their handling of clerical sex abuse allegations.

Pope Francis invited three sex abuse survivors — Juan Carlos Cruz, Jose Andres Murillo and James Hamilton — to stay at the Domus Sanctae Marthae, the Vatican residence where he lives, and to meet with him individually April 27-29. They met him again as a group April 30.

The three men have criticized the local church’s handling of abuse cases. They accused Cardinal Francisco Javier Errazuriz Ossa, retired archbishop of Santiago, and his successor, Cardinal Riccardo Ezzati, of covering up the abuse committed by Father Fernando Karadima.

In 2011, Father Karadima was found guilty by a Vatican tribunal and sentenced to a life of prayer and penance.

The pope told the Chilean bishops that he “sincerely asked forgiveness” to the three survivors and acknowledged the bishops’ commitment to “repair the damages caused.”

Although no decisions were announced, Pope Francis thanked the bishops for their willingness to “adhere and collaborate in all those changes and resolutions that we will have to implement in the short, medium and long term.”

Those decisions, he added, will be necessary to “restore justice and ecclesial communion.”

“After these days of prayer and reflection, I send you to continue building a prophetic church that knows how to put what is important at its center: service to the Lord in the hungry, in the imprisoned, in the migrant and in the abused,” Pope Francis said.

PREVIOUS: Not just what you see: Some issues behind the Israel-Palestinian violence

NEXT: All of Chile’s bishops offer resignations after meeting pope on abuse