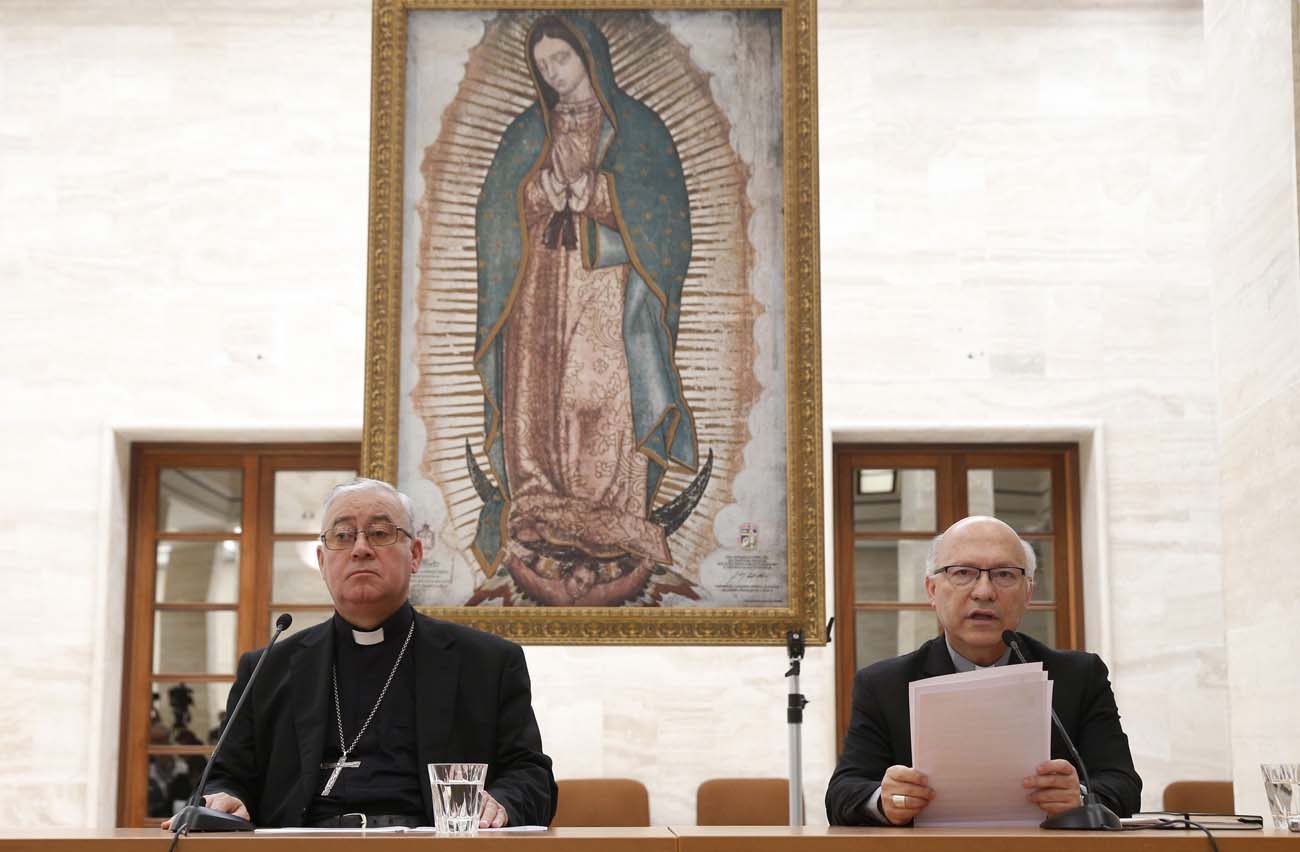 Bishop Juan Ignacio Gonzalez Errazuriz of San Bernardo, Chile, and Auxiliary Bishop Fernando Ramos Perez of Santiago, Chile, attend a press conference in Rome May 18. Bishop Gonzalez said every bishop in Chile offered his resignation to Pope Francis after a three-day meeting with him at the Vatican. (CNS photo/Paul Haring)

VATICAN CITY (CNS) — Every bishop in Chile offered his resignation to Pope Francis after a three-day meeting at the Vatican to discuss the clerical sexual abuse scandal.

“We want to announce that all bishops present in Rome, in writing, have placed our positions in the Holy Father’s hands so that he may freely decide regarding each one of us,” Bishop Juan Ignacio Gonzalez Errazuriz of San Bernardo said May 18 in a statement on behalf of the country’s bishops.

The unprecedented decision was made on the final day of their meeting May 15-17 with Pope Francis.

Auxiliary Bishop Fernando Ramos Perez of Santiago, secretary-general of the Chilean bishops’ conference, said the pope had read to the 34 bishops a document in which he “expressed his conclusions and reflections” on the 2,300-page report compiled by Archbishop Charles Scicluna of Malta and his aide, Father Jordi Bertomeu, during a visit to Chile to investigate the scandal.

“The pope’s text clearly showed a series of absolutely reprehensible acts that have occurred in the Chilean church in relation to those unacceptable abuses of power, of conscience and sexual abuse that have resulted in the lessening of the prophetic vigor that characterized her,” Bishop Ramos said.

After reflecting on the pope’s assessment, he added, the bishops decided to hand in their resignations “to be in greater harmony with the will of the Holy Father.”

“In this way, we could make a collegial gesture in solidarity to assume responsibility — not without pain — for the serious acts that have occurred and so that the Holy Father can, freely, have us at his disposal,” Bishop Ramos said.

Shortly after the announcement, Juan Carlos Cruz, one of three survivors who met privately with Pope Francis in April, tweeted, “All Chilean bishops have resigned. Unprecedented and good. This will change things forever.”

The bishops will continue in office unless or until the pope accepts their resignations.

The document in which Pope Francis gave his evaluation of the situation of the church in Chile was leaked May 17 by Chilean news channel Tele 13. The Associated Press reported that the Vatican confirmed the document’s authenticity.

The pope wrote in the document that removing some church leaders from office “must be done,” but that “it is not enough; we must go further. It would be irresponsible of us not to go deep in looking for the roots and structures that allowed these concrete events to happen and carry on.”

In it, the pope said that “the painful situations that have happened are indications that something is wrong with the ecclesial body.”

The wound of sexual abuse, he said, “has been treated until recently with a medicine that, far from healing, seems to have worsened its depth and pain.”

Reminding the bishops that “the disciple is not greater than his master,” Pope Francis warned them of a “psychology of the elite” that ignores the suffering of the faithful.

He also said he was concerned by reports regarding “the attitude with which some of you bishops have reacted in the face of present and past events.”

This attitude, the pope said, was guided by the belief that instead of addressing the issue of sexual abuse, bishops thought that “just the removal of people would solve the problem.”

In an accompanying footnote, the pope said the bishops’ behavior could be labeled as “the Caiphas syndrome,” referring to the high priest who condemned Jesus saying, “Better for one man to die for the people than that the whole nation perish.”

The document’s footnotes included several details from the investigation made by Archbishop Scicluna, who is president of a board of review within the Congregation for the Doctrine of the Faith; the board handles appeals filed by clergy accused of abuse or other serious crimes.

The pope said the report confirmed that, in some instances, the bishops deemed accusations of abuse as “implausible.”

But Pope Francis said he was “perplexed and ashamed” after he received confirmation that undue pressure by church officials was placed on “those who carry out criminal proceedings” and that church officials had destroyed compromising documents.

Those actions, he said, “give evidence to an absolute lack of respect for the canonical procedure and, even more so, are reprehensible practices that must be avoided in the future.”

Following the document’s release, Cruz applauded the pope’s evaluation of the abuse crisis and of the bishops’ behavior toward survivors of sexual abuse.

“This is the pope that I met during my conversations in the Vatican,” Cruz told Chilean news site, Emol, May 17. “I hope all (the bishops) resign and that the church in Chile begins to rebuild with true shepherds and not with these corrupt bishops who commit and cover up crimes, as the document states.”

NEXT: Christians, Muslims need to cooperate, not compete, cardinal says