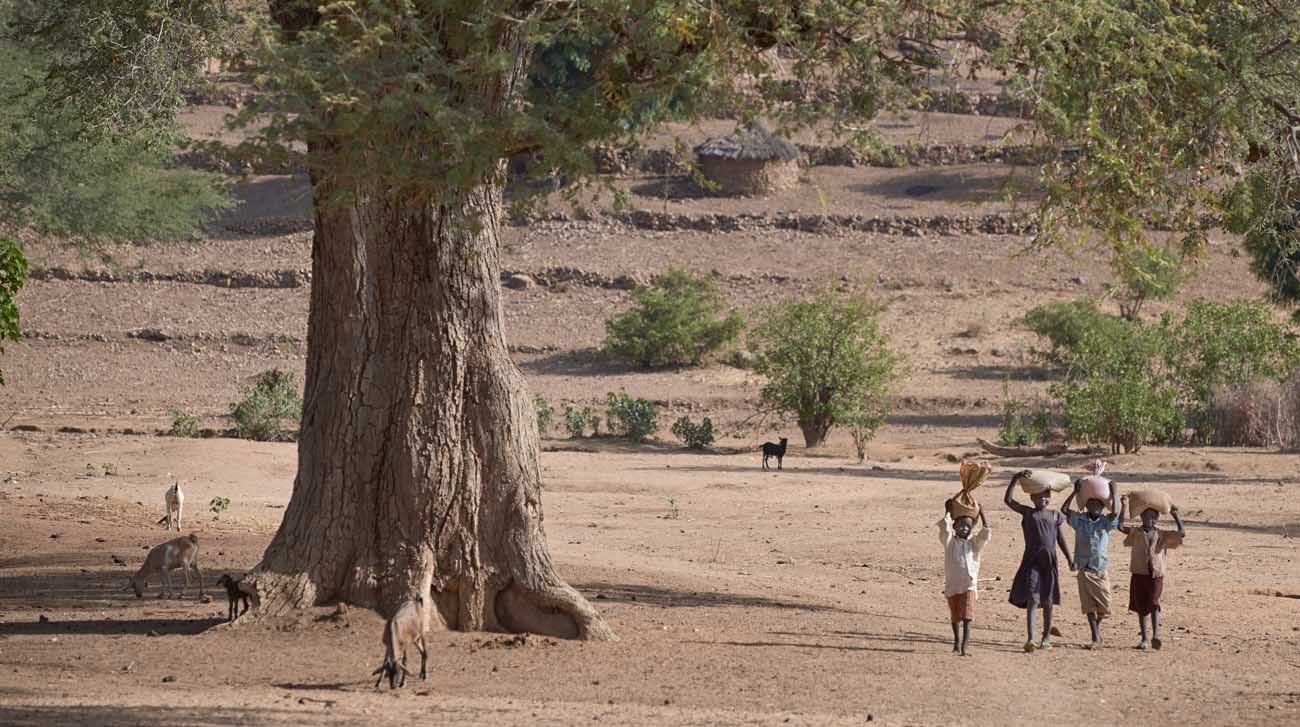 Children walk in Kauda, a village in the Nuba Mountains of Sudan, April 30. (CNS photo/Paul Jeffrey)

NUBA MOUNTAINS, Sudan (CNS) — The leader of a rebel group fighting the government of Sudan says the Catholic Church has given hope to the people of that country’s war-torn Nuba Mountains.

Abdelaziz Adam al-Hilu, chair of Sudan People’s Liberation Army-North, says the accompaniment of the church, under the leadership of retired Bishop Macram Max Gassis of El Obeid, has encouraged the people of the Nuba Mountains during decades of war with the government in Khartoum.

Bishop Gassis, who had been threatened by the Islamist government in Khartoum, Sudan, relocated to Nairobi, Kenya, in the 1990s and began visiting the isolated Nuba Mountains region, often flying into clandestine airstrips to avoid detection by the Sudanese military.

“His coming was a big relief to the people. It was moral support. When people saw him here, it gave them hope. They felt they weren’t alone, that they had friends, and that something good would happen,” Hilu said.

Bishop Gassis’ visits came in the middle of decades of on-again, off-again fighting between the central government and several rebel movements in the South and other peripheral areas of the country. In 2005, a peace treaty was signed that led to the eventual independence of neighboring South Sudan, but the Nuba Mountains and two other nearby areas were left out of the accord. The Nuba people continued to suffer isolation and violence.

“There was no medicine, so people were using just roots and local herbal medicines, but then Bishop Macram ferried in medicines. He rehabilitated the church so the faithful could continue their prayer. He established the hospital and the schools,” Hilu said.

“Then came so many of his colleagues from the Catholic Church. The most famous of them were Dr. Tom and Sister Angelina,” Hilu said, referring to Dr. Tom Catena, a U.S. lay missionary, and Sister Angelina Nyakuru, a Ugandan Comboni sister and nurse. “But there are many more.” 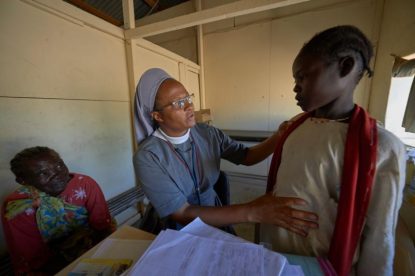 Catena and Sister Nyakuru both work at Mother of Mercy Hospital in Gidel, which Bishop Gassis founded in 2008. When the Khartoum government started indiscriminate bombing of the Nuba Mountains in 2011, almost all foreigners fled. Catena and Sister Nyakuru and a handful of other Catholic workers were among the few who remained, regularly taking refuge in foxholes with the people they served while Sudanese soldiers rolled barrel bombs out of Antonov cargo planes in the skies above their communities.

With the United Nations and most NGOs afraid to enter the war-torn liberated zone, despite a partial cease-fire beginning last year, Catholic workers provide most of the medical care and education in the region, and offer some technical assistance to farmers who’ve been pushed on to less fertile hillsides by the bombing of their valley plots.

“These are great friends, and we appreciate what they have done and the hope they and the Catholic Church gave the people by providing both material and moral support. These are great people in the eyes of the Nuba, especially those in the liberated areas,” Hilu said.

Hilu was interviewed in a heavily defended military post tucked back in the mountains. He is both commander of the SPLA-North troops as well as the de facto governor of the liberated area, in charge of everything from road maintenance to negotiating the region’s political future.

The SPLA-North is one of several rebel groups in Sudan, whose Islamist rulers have cracked down viciously on regional attempts at autonomy.

“We constitute the front line against political Islam that has been attacking its own citizens in the Nuba Mountains and Blue Nile for the last seven years. They are using every kind of weapon to exterminate the Nuba and occupy our land, as well as the land of the Funj and people in Darfur,” Hilu said.

“While we are the first victims of political Islam, of extremism, our people in government-controlled Kadugli and the other big towns are also targeted, the priests are arrested, the churches are demolished, and Christian girls and women are persecuted because of they have a different kind of dress. These Nuba in government-controlled areas are kept in shantytowns, with no employment, while the cost of living is very high. They are also dying of hunger. They are also starved by (Sudan President Omar) al-Bashir as part of the genocide project.”

Although armed resistance was invigorated by Khartoum’s attempt to install Shariah law nationwide in the 1990s, Hilu said relations between Muslims and Christians in the Nuba Mountains are exemplary.

“There is an understanding here that religion is a private affair, a relation between an individual and their God. This is why you find Christians, Muslims and African believers all within the same family. Religion must not be a cause for friction or differences,” he said.

Hilu said “better management of diversity” is necessary if Sudan is to remain intact.

“We are fighting for a secular, democratic, and united Sudan. Unity is a strength. But the Islamists, the Muslim extremists under Bashir, do not believe in diversity. They don’t respect religious diversity, ethnic diversity, or cultural diversity. They want to exterminate others in order to have an Arab Muslim Sudan. Anyone who is not an Arab or a Muslim has no place in their country,” he said.

The liberation movement has tried to boost women’s traditional second-class status in the region. To keep girls in school, at the beginning of May it implemented a new law that any man who gets a female student pregnant must pay three times the normal bride price, usually a certain number of cows. 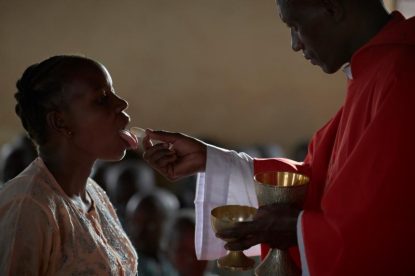 Father Zacharia Osman distributes Communion to a woman in Lugi, a village in the Nuba Mountains of Sudan, April 25. (CNS photo/Paul Jeffrey)

“We believe that women have equal rights with men, but if women are not educated they will not be able to enjoy these rights,” said Hilu, who said he was looking for a religious congregation or other group interested in opening a girls’ boarding school in the Nuba Mountains.

Hilu expressed appreciation for “friends in the U.S. Congress” who have resisted the normalization of U.S. relations with Bashir, who was indicted by the International Criminal Court on charges of genocide, war crimes and crimes against humanity.

Last year the U.S. government announced an end to most economic sanctions against the Bashir regime, but a bipartisan group of 57 members of Congress wrote the president a letter in March urging him to hold the Sudanese leader accountable for massive human rights abuses and corruption.

Hilu, whose military force alone is no match for the modern weapons in Khartoum’s arsenal, says the world must keep pressure on Bashir.

“We want a peaceful country, a stable and democratic country where there is freedom for all. But with the Shariah law imposed by the National Islamic Front under Bashir, there is no room for democratization or freedom. So if they can put pressure on Bashir to remove this Shariah, then there would be room for a united and peaceful Sudan,” Hilu said.

NEXT: Reborn in baptism, Christians are called to live like Christ, pope says