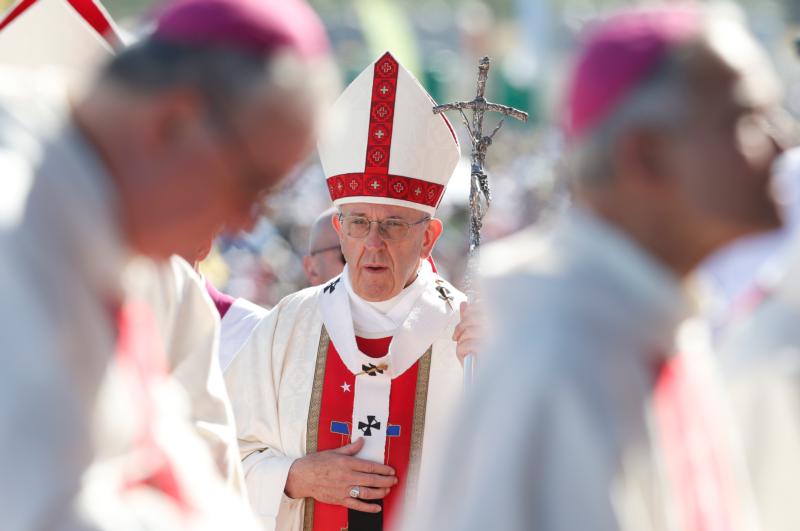 Pope Francis arrives in procession with other bishops during Mass at the Maquehue Airport near Temuco, Chile, Jan. 17. The bishops of Chile will be at the Vatican May 14-17 for meetings with Pope Francis to discuss their handling of clerical sex abuse allegations. (CNS photo/Paul Haring)

VATICAN CITY (CNS) — Pope Francis called the bishops of Chile to the Vatican to “examine the causes and consequences” of the clerical sexual abuse scandal and acknowledge personal responsibility and “the mechanisms that in some cases led to a cover up and serious omissions regarding the victims,” the Vatican said.

In a statement May 12, the Vatican press office said 31 Chilean diocesan and auxiliary bishops, along with two retired bishops, will meet with Pope Francis May 15-17 in one of the small meeting rooms behind the Vatican audience hall.

The objective of the meeting is “to discern together, in the presence of God, the responsibility of all and each one in these devastating injuries, as well as to study appropriate and lasting changes that would prevent the repetition of these always reprehensible acts,” the statement said.

Cardinal Marc Ouellet, prefect of the Congregation for Bishops, will join the pope and the Chileans, the Vatican said.

The goal is “to re-establish trust in the church through good shepherds who witness with their lives that they have heard the voice of the Good Shepherd and know how to accompany the suffering of the victims and work in a determined and untiring way in the prevention of abuse,” the statement said.

The Chilean bishops had said they would be at the Vatican May 14-17 to discuss with the pope their handling of clerical sex abuse allegations and, as Pope Francis had said, “to repair the scandal as much as possible and re-establish justice.”

Media reports in Chile initially indicated that Cardinal Francisco Javier Errazuriz Ossa, retired archbishop of Santiago and a member of Pope Francis’ international Council of Cardinals, would not attend the meeting. However, he boarded a plane in Santiago May 13 and flew to Rome. The Vatican press office said May 14 the cardinal’s presence brought to 34 the number of bishops expected to participate.

The three Chilean abuse survivors who met Pope Francis at the Vatican April 27-29 accused the cardinal of covering up the abuse committed by Father Fernando Karadima, who in 2011 was found guilty by a Vatican tribunal and sentenced to a life of prayer and penance. The survivors also claimed the cardinal was an active participant in campaigns to cast doubts on their honesty and their motives in coming forward.

A statement published by the Chilean bishops’ conference May 10 said, “We reiterate our unity with Pope Francis in the pain and shame he expressed about the crimes committed against minors and adults in church settings.”

Issued by the permanent committee of the conference, the statement said the bishops also realize that despite steps they have taken, “it has not always been possible to heal the wounds of abuse, which continue to be an open wound in the hearts of the victims and for the people of God.”

Pope Francis’ meetings in April with the three survivors, the statement said, “set an example and show us the path that the Chilean church is called to follow in the face of accusations of abuse of conscience, sexual abuse and, ultimately, against any abuse of power that may occur within our communities.”

In the same letter convoking the bishops’ meeting, the pope had said he was inviting the survivors to Rome to personally apologize to them. In the letter, Pope Francis apologized for underestimating the seriousness of the sexual abuse crisis in the country after calling for a new investigation into allegations that Bishop Juan Barros of Osorno was guilty of covering up for Father Karadima, his former mentor.

The pope said he made “serious mistakes in the assessment and perception of the situation, especially due to a lack of truthful and balanced information.”

“I ask forgiveness of all those I have offended, and I hope to be able to do it personally in the coming weeks,” the pope said in the letter.

In early May, the Jesuit journal “La Civilta Cattolica” published an Italian translation of “The doctrine of tribulation,” a text written by then-Father Jorge Mario Bergoglio in 1987. Jesuit Father Antonio Spadaro, editor of the journal, noted that Pope Francis quoted that text he had written as a priest when he spoke about the abuse scandal with Chilean priests, religious and seminarians in Santiago in January.

Pope Francis, at the January meeting in Chile, told the priests and religious: “There are times ‘when the tempest of persecutions, tribulations, doubts and so forth is raised by cultural and historical events, and it is not easy to find the path to follow. Those times have their own temptations: the temptation to debate ideas, to avoid the matter at hand, to be too concerned with our enemies. And I believe that the worst temptation of all is to keep dwelling on our own discouragement,'” he said, quoting the 1987 text, before adding, “Yes, dwelling on how disheartened we are.”

Pope Francis also told the religious and clergy he knew the church in Chile was living through “times of upheaval. I know the pain resulting from cases of the abuse of minors, and I am attentive to what you are doing to respond to this great and painful evil — painful because of the harm and sufferings of the victims and their families, who saw the trust they had placed in the church’s ministers betrayed.”

But, he said, it is also painful for good and holy priests and sisters who now face “suspicion and questioning” because of the horrendous acts some have committed. The response, he said, must be to “ask God to grant us the clear-sightedness to call reality by its name, the strength to seek forgiveness and the ability to listen to what he tells us and not dwell on our discouragement.”

NEXT: Young people in the church need to be heard, not silenced, pope says