Comic book take on the national pastime a well-pitched delight 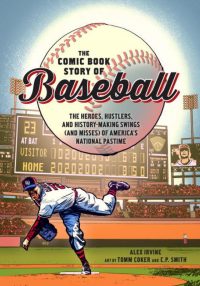 This factually jam-packed and beautifully designed book is suitable for most older teens and adults. Still, parents should be cautioned: Baseball is a sport that has always included rough and crude language, a couple of instances of which are reproduced here (censored with asterisks).

There also are references to the drug use that occurred during the “steroid era” of the game in the 1990s.

The art is done in a beautiful realist style featuring artistic renderings based on reproductions of historical photographs. The basics are all here: Abner Doubleday, who supposedly invented the game in 1839 (this has been debunked as mostly myth); Babe Ruth, Ty Cobb, Cy Young, and superhuman Hall of Fame pitcher Walter Johnson.

Yet Irvine and his collaborators also cover the scandals and the more obscure history and factoids of the game. There’s the infamous 1919 “Black Sox” scandal of a World Series thrown for money, and the disgrace of black ballplayers being forced to play in the Negro Leagues until the Brooklyn Dodgers’ Jackie Robinson reintegrated the game in 1947.

In 1970, pitcher Jim Bouton published a juicy memoir, “Ball Four,” that exposed the drug use and other excesses of several players. As Irvine notes, Bouton “blew the lid off baseball’s long-held tradition of clubhouse omerta.”

There was also the modern steroid period, during which home run tallies where inflated due to performance-enhancing drugs.

On the lighter side, Irvine, Coker and Smith (names that sounds like double-play combination) reveal the quirkiness that has always been part of baseball. The Yankees were the first team to put number on their uniforms in 1929, so that fans in the “cheap seats” could identify their favorite players. There’s William Arthur “Candy” Cummings, who invented the curveball in 1867 based on how tossed clamshells flew in an arc.

Also here is Charley Pride, the Negro League player who became a country music star and now owns part of the Texas Rangers. Of course, no baseball book would be complete without Berraisms, those pithy quips from famous Yankees catcher Yogi Berra.

“Ninety percent of baseball is mental,” Berra said. “The other half is physical.” Berra was on 10 World Series teams, more than any other player.

In sum, the book amounts to a well-pitched delight.

NEXT: Ladies of ‘Ocean’s 8’ add glamor, humor to their larceny