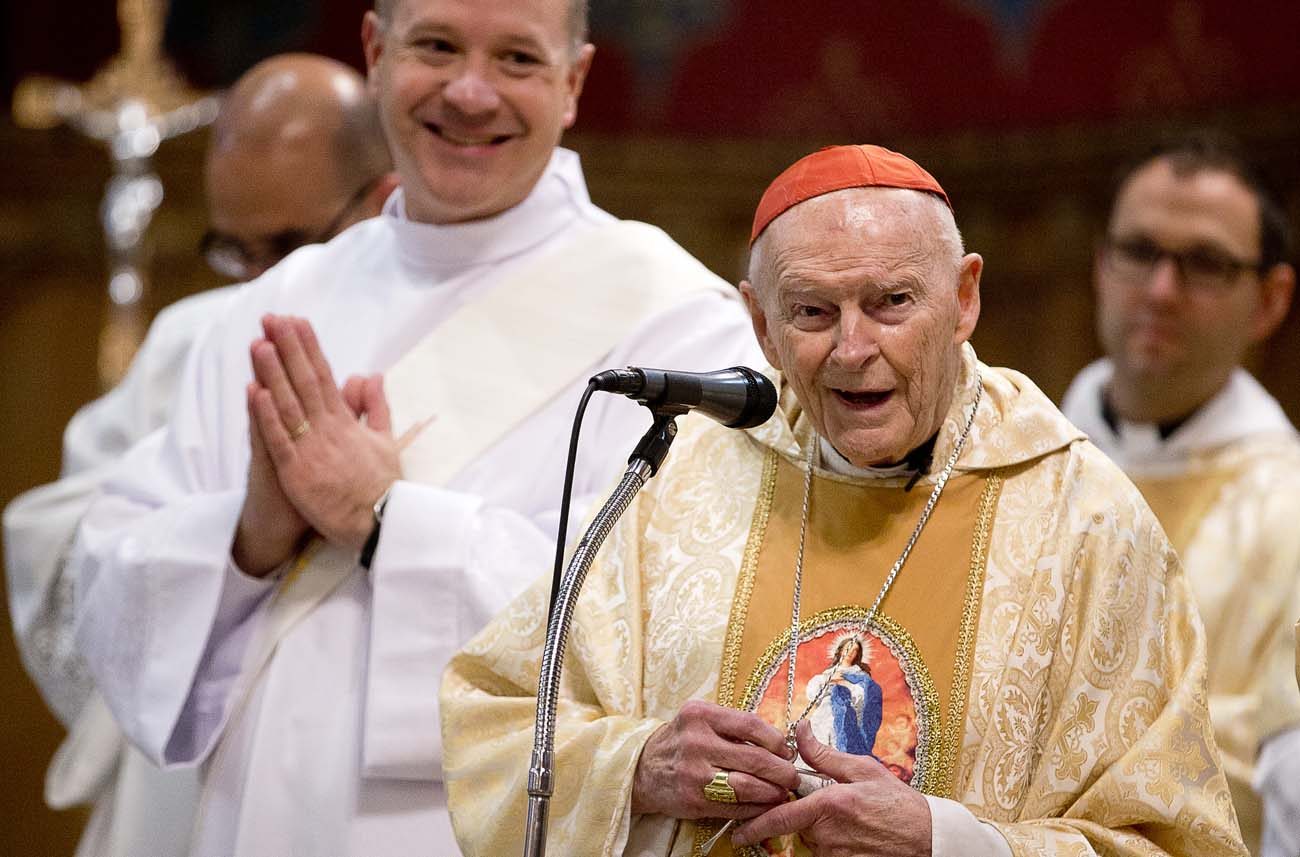 UPDATED – WASHINGTON (CNS) — Cardinal Theodore E. McCarrick, retired archbishop of Washington, said June 20 he will no longer exercise any public ministry “in obedience” to the Vatican after an allegation he abused a teenager 47 years ago was found credible.

Bishop James F. Checchio of Metuchen, New Jersey, where Cardinal McCarrick served as its first bishop, said in a statement the same day that he had been advised that “Cardinal McCarrick himself has disputed this allegation and is appealing this matter through the canonical process.”

“While shocked by the report, and while maintaining my innocence,” Cardinal McCarrick said in his statement, “I considered it essential that the charges be reported to the police, thoroughly investigated by an independent agency and given to the Review Board of the Archdiocese of New York. I fully cooperated in the process.”

Cardinal McCarrick said that “some months ago” he was informed of the allegation by New York Cardinal Timothy M. Dolan.

“My sadness was deepened when I was informed that the allegations had been determined credible and substantiated,” Cardinal McCarrick said.

Cardinal Dolan, in a June 20 statement, said it was “the first such report of a violation” against Cardinal McCarrick “of which the archdiocese was aware.”

In separate statements, Bishop Checchio and Cardinal Joseph W. Tobin of Newark, New Jersey — where Cardinal McCarrick served in-between his appointments to Metuchen and Washington — said this was their first notice that Cardinal McCarrick had been accused of sexual abuse of a minor.

“In the past, there have been allegations that he engaged in sexual behavior with adults,” Cardinal Tobin said. “This archdiocese and the Diocese of Metuchen received three allegations of sexual misconduct with adults decades ago; two of these allegations resulted in settlements.”

Several news accounts quoted the lawyer for the accuser, a New York-area businessman now in his early 60s, who said his client was a 16-year-old altar boy being fitted for a cassock to wear during Mass when then-Msgr. McCarrick fondled him. Patrick Noaker, the lawyer, said a similar incident happened a year later.

Noaker told reporters that his client met in April with the New York Archdiocesan Review Board, which verified his claims. Going to the board was his client’s only recourse, Noaker said, because of criminal and civil statutes of limitations on an almost 50-year-old incident.

Cardinal McCarrick, who turns 88 July 7, was ordained a priest of the New York Archdiocese May 31, 1958. He was ordained auxiliary bishop of New York May 24, 1977, six years after the incident of abuse is believed to have occurred.

Cardinal Dolan said the alleged abuse occurred during the time Cardinal McCarrick served as an archdiocesan priest in New York.

He added the allegation was turned over to law enforcement officials, and was then thoroughly investigated by an independent forensic agency, as per the “Charter for the Protection of Children and Young People” first approved by the U.S. bishops in 2002.

“The Holy See was alerted as well, and encouraged us to continue the process,” he added. “Again according to our public protocol, the results of the investigation were then given to the Archdiocesan Review Board, a seasoned group of professionals including jurists, law enforcement experts, parents, psychologists, a priest, and a religious sister.”

The Archdiocese of New York “renews its apology to all victims abused by priests,” Cardinal Dolan said. “We also thank the victim for courage in coming forward and participating in our independent reconciliation and compensation program, as we hope this can bring a sense of resolution and fairness.”

The Archdiocese of Washington said in a June 20 statement that “the Holy See … has exclusive authority in the oversight of a cardinal” and referred the matter to the New York Archdiocese.

It added the instruction for Cardinal McCarrick to refrain from exercising public ministry came “at the direction of our Holy Father, Pope Francis,” and was delivered by Cardinal Pietro Parolin, Vatican secretary of state.

Cardinal Tobin said he recognized the “range of emotions” felt by Newark-area Catholics upon hearing the news. “I am thinking particularly of those who have experienced the trauma of sexual abuse by clergy — whose lives have been impacted tragically by abuse,” he added. “To those survivors, their families and loved ones, I offer my sincere apologies and my commitment of prayer and action to support you in your healing.”

At the same time, “no doubt many of you developed strong relationships with him and appreciate the impact of his service,” Cardinal Tobin said. “Those feelings are likely hard to reconcile with the news of a credible and substantiated claim of abuse of a minor.”

“The abuse of anyone who is vulnerable is both shameful and horrific. The abuse of a minor by a priest — as is being reported in this case from New York — is an abomination and sickens and saddens us all,” Bishop Checchio said.

“The work of building the kingdom of God in this diocese is much more than its bishops, and I thank you for all of your help here in the Diocese of Metuchen in supporting our common mission,” he added.

Cardinals Dolan, Tobin and Wuerl and Bishop Checchio all asked for prayers for those involved, and recommitted themselves to support of clergy sexual abuse victims.

The most senior church official to face criminal charges in connection with child sexual abuse is Australian Cardinal George Pell, head of the Vatican Secretariat for the Economy. He took a leave of absence from his position in the summer of 2017 to face charges of sexual abuse of minors from the 1970s, when he was a priest, and the 1990s, when he was archbishop of Melbourne.

Although Cardinal Pell has consistently denied the charges, in early May an Australian magistrate ordered him to stand trial, saying she believed there was enough evidence presented in connection with about half the original charges to warrant a full trial.

NEXT: Women faith leaders at rally denounce separation of families at border