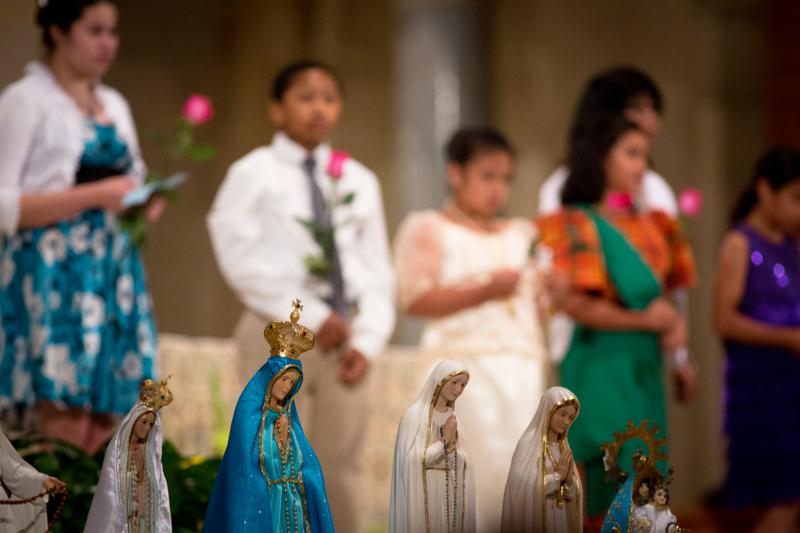 In this 2014 file photo, Filipino children participate in a procession of Marian images at the Basilica of the National Shrine of the Immaculate Conception in Washington. A new document, “Encountering Christ in Harmony,” is described as a “pastoral response” meant to provide support and to offer ideas for ministry to the nation’s nearly 3 million Asian and Pacific Island Catholics. (CNS photo/Tyler Orsburn)

FORT LAUDERDALE, Fla. (CNS) — A new document focused on guiding the American church in addressing the pastoral needs of Asian and Pacific Island Catholics was approved by the U.S. Conference of Catholic Bishops during their annual spring assembly.

Adopted 187-2 with two abstentions, “Encountering Christ in Harmony” is described as a “pastoral response” meant to provide support and to offer ideas for ministry to the nation’s nearly 3 million Asian and Pacific Island Catholics.

Bishop Oscar A. Solis of Salt Lake City, chairman of the bishops’ Subcommittee for Asian and Pacific Islander Affairs, told the assembly a day before the vote that the document addresses the fastest growing minority community in the United States church.

“Asian and Pacific Islanders are ready for pastoral engagement in the church’s mission of evangelization,” he said.

“Our approval of this document is indicative of an essential pastoral outreach to the mission of the church in the United States. It’s a response to the call of Pope Francis to go to the peripheries to proclaim the Gospel,” he added.

The document has been in the works for more than two years. It follows a report by a team of social scientists based on a nationwide questionnaire and online survey that asked the Asian and Pacific Island community about their pastoral needs and concerns.

It also serves as a follow-up to the USCCB’s 2001 pastoral statement “Asian and Pacific Presence: Harmony in Faith,” which outlined the cultural, social and ethnic diversity in the Asian and Pacific Island communities and at the same time recognized and celebrated the gifts and values common to the communities.

“The goal of this response is to make Asian and Pacific Island Catholics feel at home, both in the church and in the United States, while being able to reserve the richness of the spiritual and cultural background that they bring as contributing members to the body of Christ,” the document said.

The Asian and Pacific Island community is the fastest growing in the United States, according to document.

One of every five Asian and Pacific Islanders in the U.S. is Catholic. Filipinos comprise the largest segment of the community followed by Vietnamese, Chinese and Koreans.

By design, the document does not address members of the Eastern Catholic churches except for the Syro-Malabar and Syro-Malankara Catholics with roots in India.

Scalabrinian Sister Mryna Tordillo, assistant director of the Secretariat of Cultural Diversity in the Church, told Catholic News Service that “Encountering Christ in Harmony” addresses four central concerns that surfaced in the responses: identity, generations, leadership and culture of encounter and dialogue.

The document is the product of collaboration between the bishops’ Committee on Cultural Diversity in the Church and the Subcommittee on Asian and Pacific Island Affairs.

Originally it was thought that “Encounter Christ in Harmony” would be a formal pastoral plan for ministry, but that as work continued, those involved decided to issue it as a pastoral response instead to guide dioceses and parishes in ministry to Asians and Pacific Islanders, Sister Myrna explained.

The 71-page document offers suggestions for action at the national, diocesan and parish levels.

“We the Catholic bishops of the United States, offer this pastoral response to assist diocesan and parish leaders and all the faithful in welcoming and integrating our Asian and Pacific Island brothers and sisters as they strive to live a faith-filled life in the Catholic Church,” the document said in its introduction.

It acknowledged that the communities continue to confront “racial discrimination, stereotyping and the clash of values with mainstream United States culture.”

Citing the call of Pope Francis to encounter Christ in one another, the document said “the cultural diversity of a community, therefore, is necessarily an integral factor in the encounter with the Gospel.”

Being Catholic is part of being Asian and Pacific Islander and it becomes important when ministering within these communities to “recognize how religion and culture are so intimately intertwined,” the document said.

It also noted the challenges confronting Asians and Pacific Islanders, among them racism. It cited the Chinese Exclusionary Act of 1882 and the internment of Japanese Americans during World War II as examples of racist actions. Because of these incidents, it said, for many Asian and Pacific Islanders, “the reality of being linguistically or physically different from the larger U.S. population is a constant reminder of their marginalized status.”

It encourages the church at all levels to “include and invite” Asian and Pacific Islanders who may be geographically or socially isolated into ministry and church leadership. It also calls for active encouragement of religious vocations.

Suggestions for outreach include establishing resource centers, recognizing “local gifts.” It encourages Asian and Pacific Islanders to seek opportunities to teach native languages and customs, share music at liturgies, decorate worship spaces or pastoral centers with native textiles and fabric and raise funds for national and international Catholic organizations that benefit the communities.

“Encountering Christ in Harmony” also acknowledges the importance of Marian devotions within the communities and urged the incorporation of Asian and Pacific Island traditional celebrations at parishes and within diocese.

NEXT: Video, new items to aid bishops’ election kit ahead of 2020 election