Official explains Vatican media strategy: Let the pope be himself 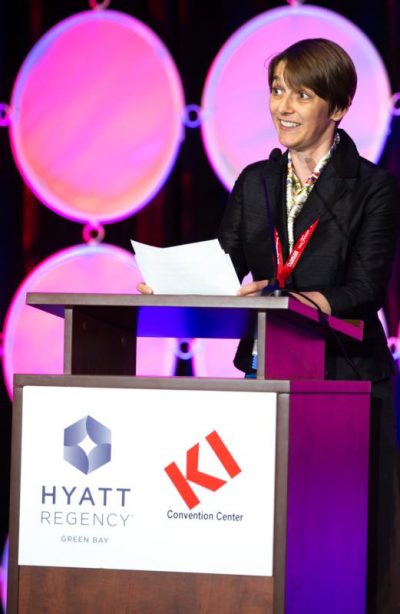 Natasa Govekar, director of the theological-pastoral department of the Vatican Secretariat for Communication, gives her June 13 keynote address at the Catholic Media Conference in Green Bay, Wis. Govekar told the audience that part of the Vatican’s media strategy is to let the pope be himself. (CNS photo/Chaz Muth)

GREEN BAY, Wis. (CNS) — To be “successful” on social media, Pope Francis only has to be himself; gimmicks aren’t necessary, a Vatican official told Catholic communicators.

“People want the pope just to be the pope,” said Natasa Govekar, director of the theological-pastoral department of the Secretariat for Communication. For instance, she said, photos of the pope “with circus performers or wearing a silly hat do not do as well as photos of the pope praying.”

People congregate on social media sites, so the Catholic Church must be there with the Gospel message of salvation, love and tenderness, Govekar said June 12 at the Catholic Media Conference in Green Bay.

Asked about the process for determining what tweets go out to the 47 million people who follow the nine-language @Pontifex accounts, Govekar said a team makes suggestions, but Pope Francis has the final say.

Still, she said, in the end “it’s not about us. It’s not even about the pope. It’s about Jesus.”

Addressing the first plenary session of the conference June 12-15, Govekar spoke about the Vatican’s massive reorganization of its communications efforts and about the importance of moving its media into the digital realm, a process many diocesan newspapers and communications offices are experiencing as well.

The communication secretariat’s main task with a communicator like Pope Francis, she said, “is to try not to be an obstacle to what this great communicator already is doing.”

Across all nine languages, Govekar said, the pope’s tweets garnering the highest “engagement” rates — the rate of tweets soliciting comments or “likes” — were those that could be described as inspirational or inviting reflection.

On the other hand, she said, tweets related to a political situation in a specific country rarely attract much attention and have low rates of being shared.

With Twitter’s maximum 280 characters, the @Pontifex account offers “pills of wisdom” and “capsules of love” in the style Pope Francis himself recommended for effective evangelization in his exhortation “The Joy of the Gospel,” Govekar said.

As Pope Francis wrote, “When we adopt a pastoral goal and a missionary style which would actually reach everyone without exception or exclusion, the message has to concentrate on the essentials, on what is most beautiful, most grand, most appealing and at the same time most necessary. The message is simplified, while losing none of its depth and truth, and thus becomes all the more forceful and convincing.”

Govekar also watches the newer @Franciscus Instagram account, which has more than 5.6 million followers. The largest group of followers is from Brazil, followed by the United States, she said. And the largest age group for followers is 25-34 years old.

The communications secretariat staff monitor the comments on the social media accounts “because that is the way to know the questions people are asking,” she said. It makes no sense to respond to questions or concerns people don’t have.

Many people comment appreciatively on how “normal” the pope seems and acts, how tender and human and kind he appears, Govekar said. And if one thinks about it, “normality must be strongly desired to be obtained by a person in the pope’s position.”

The gestures, particularly the embraces, that have garnered Pope Francis the most positive attention, she said, are “not the result of a communication strategy; it is simply the language of love.”

Govekar also said she is struck by how many of the comments describe the pope as “beautiful,” but then when love shines through a person or thing, “the result is beauty.”