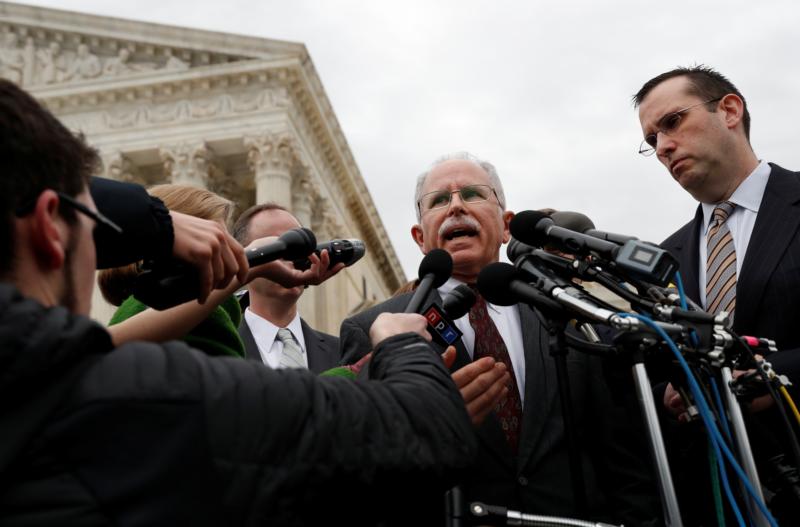 Mark Janus addresses the media outside of the U.S. Supreme Court in Washington Feb. 26. Janus, an Illinois state employee, sued over the union at his workplace making him pay fair-share fees as a nonunion member. He said it was unconstitutional and the high court in a ruling June 27 sided with him in the case, Janus v. AFSCME. (CNS photo/Leah Millis, Reuters)

UPDATED – WASHINGTON (CNS) — By a 5-4 majority, the Supreme Court declared June 27 that one of its rulings from 1977 was “wrongly decided” and overruled it, in a case on whether public-sector unions could continue to make nonmembers pay fair-share fees not related to the unions’ lobbying and political efforts.

As a result, said the court majority, “neither an agency fee nor any other form of payment to a public-sector union may be deducted from an employee, nor may any other attempt be made to collect such a payment, unless the employee affirmatively consents to pay.”

The justices split along their customary ideological lines, with Chief Justice John Roberts and Justices Samuel Alito, Anthony Kennedy, Clarence Thomas and Neil Gorsuch in the majority and with Justices Elena Kagan, Sonia Sotomayor, Stephen Breyer and Ruth Bader Ginsburg in the minority.

“It is disappointing that today’s Supreme Court ruling renders the long-held view of so many bishops constitutionally out-of-bounds, and threatens to ‘limit the freedom or negotiating capacity of labor unions,'” said Bishop Frank J. Dewane of Venice, Florida, chairman of the U.S. bishops’ Committee on Domestic Justice and Human Development, in a June 27 statement. Bishop Dewane quoted from Pope Benedict XVI’s 2009 encyclical “Caritas in Veritate” (“Charity in Truth”).

“By reading the First Amendment to invalidate agency-fee provisions in public-sector collective bargaining agreements, the court has determined — nationwide, and almost irrevocably — that all government workplaces shall be ‘right-to-work,'” Bishop Dewane noted.

Quoting “Caritas in Veritate” again, he added: “Now that such agency-fee agreements are outlawed, state and federal legislators should explore alternative means ‘for the promotion of workers’ associations that can defend their rights.'”

The case is Janus v. AFSCME. Mark Janus is an Illinois state employee who contended the union unconstitutionally made him pay fair-share fees, also known as agency fees, and used the money to take positions with which he disagreed, essentially compelling speech from him. The 1977 case the court overruled was Abood v. Detroit Board of Education, in which the court allowed for the payment of such fees.

Kagan’s point mirrored one made by the USCCB in an amicus brief filed in the case this year.

The high court “should leave constitutional space for the public policy position supported for so long by so many bishops and bishop-led institutions, rather than declare still another such position outside the bounds of what policymakers are permitted to implement by law,” it said. “By its decision in this case, the court should not only preserve that room for debate as to the public-sector context now, but avoid any threats to it in the private-sector context in the future.”

“Forcing free and independent individuals to endorse ideas they find objectionable raises serious First Amendment concerns,” said the majority opinion written by Alito. “Whatever may have been the case 41 years ago when Abood was decided, it is thus now undeniable that ‘labor peace’ can readily be achieved through less restrictive means than the assessment of agency fees.”

“Abood did not appreciate the very different First Amendment question that arises when a state requires its employees to pay agency fees,” the court said. “Developments since Abood, both factual and legal, have ‘eroded’ the decision’s ‘underpinnings’ and left it an outlier among the court’s First Amendment cases.”

Kagan, though, rejected the majority’s conclusions.

“Rarely if ever has the court overruled a decision — let alone one of this import — with so little regard for the usual principles of ‘stare decisis.’ There are no special justifications for reversing Abood. It has proved workable. No recent developments have eroded its underpinnings. And it is deeply entrenched, in both the law and the real world,” she said.

“Stare decisis” is the principle by which judges are bound to precedents. Alito’s majority opinion said, “Abood was poorly reasoned, and those arguing for retaining it have recast its reasoning, which further undermines its ‘stare decisis’ effect.”

“More than 20 states have statutory schemes built on the decision,” it continued. “Those laws underpin thousands of ongoing contracts involving millions of employees. Reliance interests do not come any stronger than those surrounding Abood. And likewise, judicial disruption does not get any greater than what the court does today.”

Kagan said, “Ignoring our repeated validation of Abood” — she cited six precedents — “the majority claims it has become ‘an outlier among our First Amendment cases.’ That claim fails most spectacularly.”

She added, “Reviewing those decisions not a decade ago, this court — unanimously — called the Abood rule ‘a general First Amendment principle.'”

“The Supreme Court once again ruled in favor of hyper-individualism and against the collective needs of our people,” said a June 27 statement from Sister Simone Campbell, a Sister of Social Service who is executive director of the Catholic social justice lobby Network.

“The decision also primes the pump to further exacerbate income and wealth disparity in our nation. Income and wealth inequality is at the very heart of anguish and division in our society,” Sister Campbell added. “This is not what our democracy should be about. ‘We the People’ are better than this.”

The ruling is “just another attempt by billionaires and wealthy corporate interests to curb the freedoms of working people and strip them of their right to a strong voice in the workplace,” said a June 27 statement by Richard Lanigan, president of the Office and Professional Employees International Union. He called the decision “misguided and politically biased ruling.”

“This case was never about the plaintiff, Mark Janus — it is the culmination of decades of corporate attacks on working people, motivated by greed instead of what’s best for workers,” said AFL-CIO president Richard Trumka in a June 27 statement.

“Here’s the thing: We have never depended on any politician or judge to decide our fate and we aren’t about to start now. Workers’ rights are constitutional and that hasn’t changed,” Trumka added. “What has changed is the power of corporations to hurt workers.”

NEXT: Gomez: ‘No more excuses’ for Congress’ failure to fix immigration system