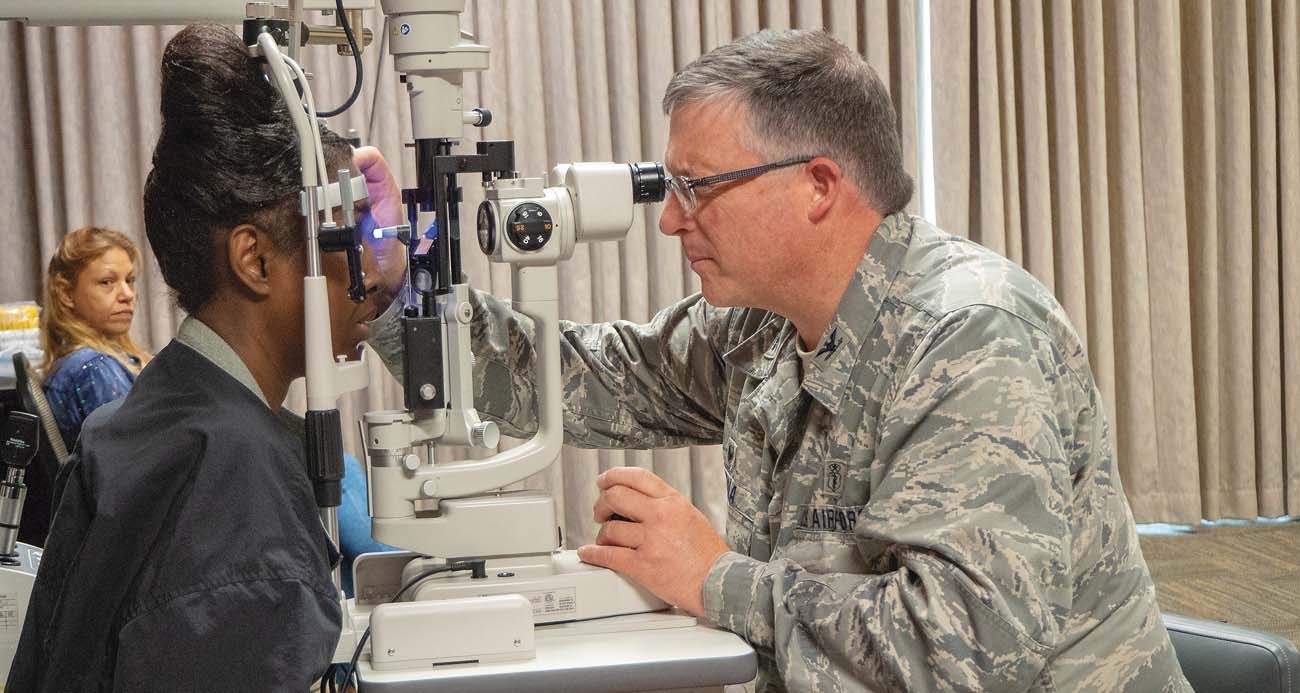 SAVANNAH, Ga. (CNS) — Over the course of nine days in May, more than 9,000 patients received free medical, dental, ophthalmological and/or veterinary care as part of Operation Empower Health — Greater Savannah.

The initiative is a joint effort between the St. Joseph’s/Candler health system, Georgia Southern University and the U.S. Department of Defense.

Its true impact on the surrounding community can’t solely be assessed by the number of patients and animals examined or even by the 26,000-plus procedures performed on them.

Rather, even more telling are the physical and emotional impacts the program had — and will continue to have — not only on its patients but also on those who served them.

“The hardest part for us is we have to turn people away,” said Lt. Col. Andrew Magnet, mission officer in charge. He noted the finite number of physicians, dentists, optometrists, veterinarians and pieces of equipment available as well as the rapidity with which available time slots filled up.

A physician with the 165th Airlift Wing based in Savannah, Magnet added that while he and his peers had expected to receive patients from as far away as Jacksonville, Atlanta or South Carolina, they were surprised when even patients from Orlando showed up.

Mercy Sister Pat Baber, director of the St. Joseph’s/Candler St. Mary’s Community Center and Health Center, said that had it not been for the program, some illnesses and conditions wouldn’t have been detected.

“You get two services automatically, and it’s a good thing because we’ve caught a lot of high blood pressure and a lot of diabetes. They didn’t know,” Sister Baber told Southern Cross, the newspaper of the Diocese of Savannah. “We have a man who we think is probably soon to have a heart attack.

As Maj. John O’Brien, a nurse with the Delaware National Guard, suggested, so many of the patients who came for treatment belong to what he described as “the hidden population of folks” — those in local communities who are often left behind or overlooked in their communities, perhaps because of a lack of insurance or inability to pay for necessary care.

“I’ve been waiting a long time, some years just to get to this point,” said Savannah resident Connie Green. She first learned about Operation Empower Health through the Garden City-based Good Samaritan clinic, operated in partnership with the Georgia Department of Community Health and Our Lady of Lourdes Church in Port Wentworth.

Green added that she came to Operation Empower Health because she doesn’t have insurance and was told by her provider at the clinic that it would be a “good chance to get everything done.”

Other unique situations shared with the approximately 400 “boots on the ground” involved in the operation like Lt. Col Janice Weixelman, a family medicine physician with the Wyoming Air National Guard, included health issues impacted by the death of family members and difficulties renewing necessary prescriptions like the water pills that patient Herbert H. Woodley Jr. said he needed for his high blood pressure.

“I have one lady that has adopted me as her daughter,” shared Capt. Livier Vaughan, a health care administrator and Spanish translator with the Delaware National Guard who served at the Garden City site. Vaughan described Operation Empower Health, her first foray with the DOD’s Innovative Readiness Training programs, as a rewarding experience, one which she hopes she will be able to repeat. “She says she was just really lonely, and I was the daughter she never had. She’s a Spanish speaker, and so we plan to keep in touch after I leave here.”

Aside from various kinds of health care professionals, also on hand for Operation Empower Health was a physician of the soul: Father Matthew Ericksen, who serves as a chaplain at St. Joseph’s/Candler Hospital and also is parochial vicar at Sacred Heart Church in Savannah.

“I’ve been told that by a priest being present it helps to improve the level of comfort and trust among those who are coming as patients,” Father Ericksen said. Magnet later said that having a priest available may also have helped assuage the anxieties of those without documentation who needed care.

According to Magnet, Operation Empower Health also was designed as an exercise in refining both civil-military relationships and intramilitary relationships — military members learn each other’s jargons, insignias and capabilities — and training for the possibility in which an extensive military-wide medical response might be needed.

Because of the role the Air Force played in her treatment — extracting her wisdom teeth — Maeli Cruz, a 17-year-old student at John Paul II Catholic School in Okatie, South Carolina, remarked that she’d consider joining up as a means of helping people just as they helped her.

“But for me it’s overwhelming to see everybody come together with a smile on their face and take care of all these people,” Magnet said of how Operation Empower Health has personally affected him. “I’ve had people come up to me as I walk out of here saying, ‘This has been a godsend.’ I just can’t believe it.”

A parishioner of the Cathedral of St. John the Baptist in Savannah, Magnet also explained how the program impacted his faith: “I mean this just shows the goodness in everyone. I mean it really does. It really doesn’t matter who you are or what religion you are. But I mean this is just so strong. You want to just keep doing it. You want to keep doing it, and then it’s sad when you can’t do it for everyone.”

Weixelman suggested that beyond benefiting those who come to Operation Empower Health for care, a big goal of the initiative “is to teach people how to take care of themselves somewhat because a little prevention goes a long ways.”

She pointed to the importance, for example, of proper foot care, diet and blood sugar management.

Sister Baber also urged local medical facilities to follow their lead and assist with follow up and specialty care, based on the overwhelming number of patients — especially dental — they diagnosed and treated.

“We’re just going to need the medical community to step up and help because we know these doctors have said ‘This is the issue. This is what needs to be done,'” Sister Baber said. “Now we have to find people who will pick up the mantle and run with it.”

Marsala is assistant to the editor of Southern Cross, newspaper of the Diocese of Savannah.