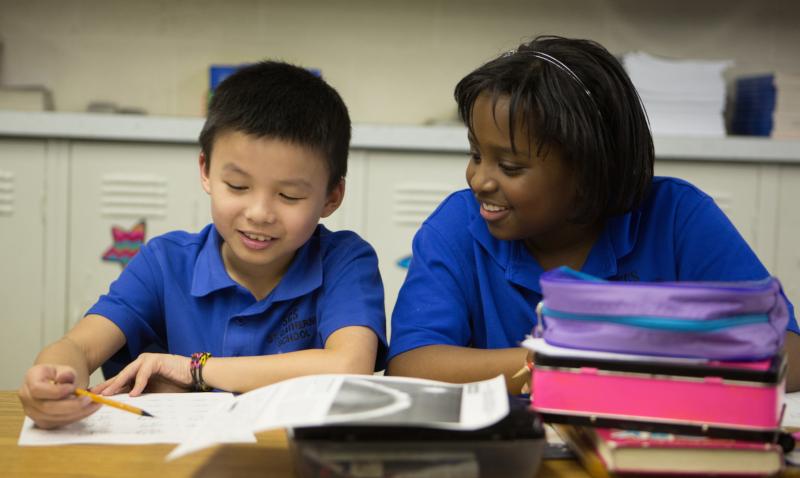 WASHINGTON (CNS) — A new study conducted by the Thomas B. Fordham Institute found that children in Catholic schools are less disruptive and have more self-control than their peers in non-Catholic or public schools.

The authors of the study said they believe that examining students’ self-discipline is particularly important in light of the ongoing debate about externally imposed discipline, such as detention and suspension, and methods of punishment used in public schools.

“Clearly, an approach that fosters self-discipline is preferable to one that relies on externally imposed discipline. So if Catholic schools have succeeded in developing such an approach, we ought to pay more attention to what they are doing and how they are doing it,” said the report, released May 31.

Since Catholic schools generally try to both educate their students on an intellectual level and try to form their students so that they will be pious, disciplined, and have good character, the authors of the study believe that understanding the effects and possible benefits of a Catholic education requires understanding both the intellectual education and personal formation Catholic schools set out to provide.

— Students in Catholic schools are less likely to be disruptive than those in other private schools or public schools.

— Students in Catholic schools exhibit more self-control than those in other private schools or public schools. “Specifically, they were more likely to control their temper, respect others’ property, accept their fellow students’ ideas and handle peer pressure,” it said.

— Students in Catholic schools exhibit more self-discipline than those in other public schools. “There is at least some evidence that attending Catholic school may benefit all sorts of children,” it said.

In many cases the gap between the frequencies with which students at Catholic schools and students at other schools either behaved well or avoided behaving poorly increased over time, hinting that the continued focus and value Catholic schools place on self-discipline continually reinforces its importance and helps foster it in students.

The authors also speculate that Catholic schools benefit from the power of religion to affect people’s behavior, although they admit that the exact means by which this happens is unclear.

They added, “We should not underestimate the power of religion to positively influence a child’s behavior — and shouldn’t restrict families’ choices on the basis of religion.”

Michael Gottfried, associate professor at the University of California-Santa Barbara, and Jacob Kirksey, a doctoral student at the same university, analyzed the data and co-wrote the report.

They took the data from the Early Childhood Longitudinal Study-Kindergarten from 1999 and 2011. These reports contain data on a nationally representative sample of children entering kindergarten in that year, and it follows them throughout their educational careers. The data comes from teachers, who record the frequency of selected behaviors among the children.

This study used data on behaviors beginning in kindergarten and continuing to fifth grade.

The institute said that as far as it knows, Gottfried and Kirksey’s is the first study “to explore the potential effects of Catholic schooling on elementary students’ self-discipline.”

“The clearest implication of our results is that Catholic schools offer an important alternative for families who may be dissatisfied with their local public schools — particularly if they are interested in cultivating a sense of self-discipline and restraint,” the authors said.

NEXT: Church praised for proactive response on abuse but warned of complacency