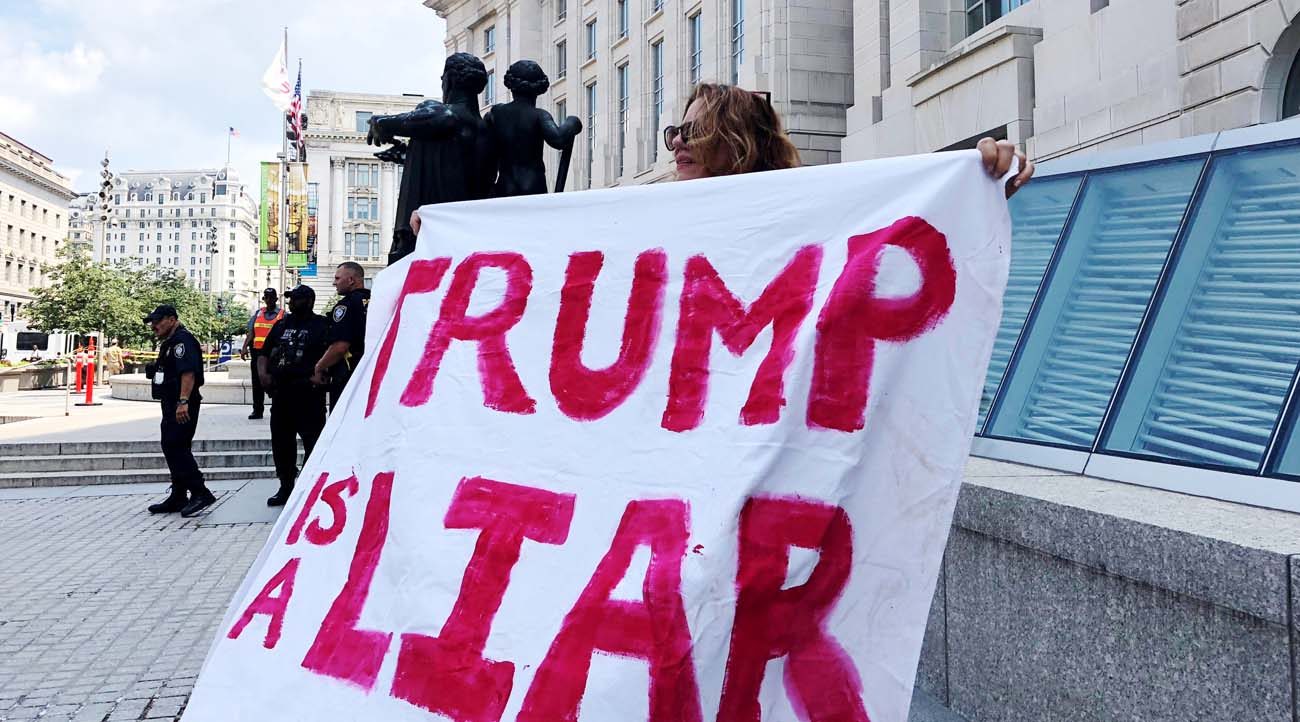 A protester is seen outside the U.S. Customs and Border Protection building in Washington June 19. Thirteen women faith leaders spoke at the rally, which was called the Women of Faith Cry Out to Keep Families Together Prayer Vigil, and they attacked the president, Attorney General Jeff Sessions, and Secretary of Homeland Security Kirstjen Nielsen for failing to end the policy of separating children from their parents. (CNS photo/Kevin Fogarty, Reuters)

WASHINGTON (CNS) — About 200 people gathered outside the U.S. Customs and Border Protection headquarters in Washington at a rally to protest the Trump administration’s policy of separating families crossing the U.S.-Mexico border June 19.

Thirteen women faith leaders spoke at the rally, which was called the Women of Faith Cry Out to Keep Families Together Prayer Vigil, and they attacked the president, Attorney General Jeff Sessions, and Secretary of Homeland Security Kirstjen Nielsen for failing to end the policy of separating children from their parents.

“It’s an honor to stand with my sisters of many faiths,” said Sister Ann Scholz of the School Sisters of Notre Dame.

In the crowd, which was about 60 percent women, people held a variety of signs — “United Methodists stand for justice,” “Toledo loves immigrants,” “Muslim women cry out for immigrant children,” “What would Jesus do?” — and peppered the speeches with chants of “Shame!” and “Stop this now!”

The Christian speakers, who made up a majority, used stories from the Bible to denounce the policy. Muslims and Jews also were in attendance.

“Don’t crucify the children on your white supremacy and wash your hands like Pilate,” said the Rev. Jennifer Butler, the CEO of Faith in Public Life. She also led the crowd in a chant that echoed Moses: “Let the children go.”

Sister Ann said that “like Mary and Joseph, these families are taking tremendous risks,” and Nikki Toyama-Szeto, the executive director of Evangelicals for Social Action, also invoked the Holy Family, saying that “if we welcome the stranger, we would have welcomed Jesus himself.”

The two Jewish speakers also drew inspiration from the texts of their religion. Rabbi Esther Lederman compared Trump to Pharaoh, referred to the fourth commandment — honor your father and mother — while insisting that President Donald Trump should honor immigrant fathers and mothers, and referenced the repeated command in the Old Testament to not wrong a stranger, because the Israelites were strangers in Egypt.

Barbara Weinstein, the director of the Commission on Social Action of Reform Judaism, quoted the Talmud to end her speech, saying that “by the breath of children, God sustains the world.”

Some of the speakers mentioned the experiences of their families and ancestors in their speeches. The Rev. Michelle Morgan, the rector of St. Mark’s Episcopal Church on Capitol Hill, told the crowd that her mother was a First Nations Canadian who was taken from her family and placed in a residential school. “I cry out in the name of my mother,” she said.

Marlena Graves, a Christian writer, called the ongoing separations at the border a pro-life issue, saying, “This is not pro-life. It is pro-death.”

The rally opened with the crowd singing “This Little Light of Mine” and ended with “We Shall Overcome.” In between, people would occasionally look out on the crowd from the windows on the second floor of the Customs and Border Protection headquarters.

One man came to a window, stood for a few seconds, shook his head and walked away.

NEXT: DiNardo: All clergy, no matter their ‘standing,’ must protect children