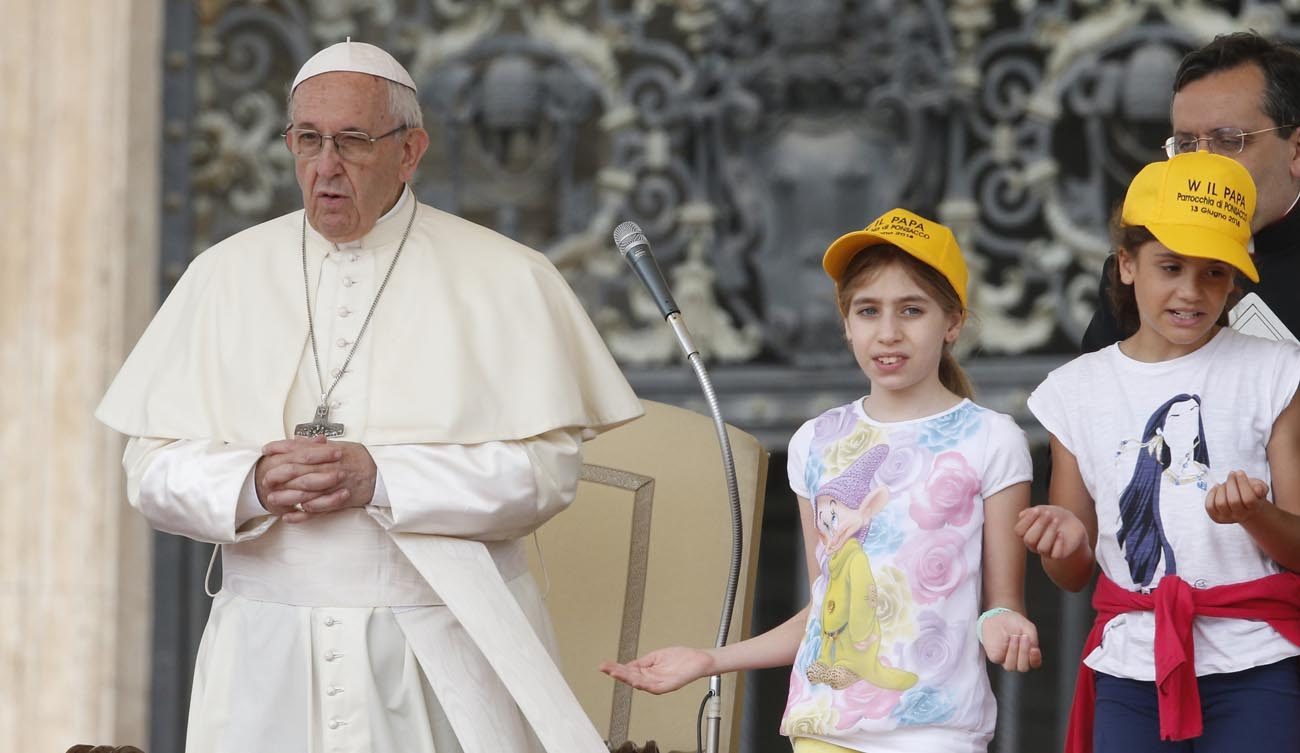 VATICAN CITY (CNS) — The worst enemies in a young person’s life aren’t the problems they may face, Pope Francis said.

The biggest dangers are being unwilling to find a way to adapt, mediocrity by settling for the status quo, and fear, he said at his general audience in St. Peter’s Square June 13.

“It is necessary to ask the heavenly father for the gift of healthy restlessness for today’s young people, the ability to not settle for a life without beauty, without color. If young people are not hungry for an authentic life, where will humanity end up?” he said.

As the pope spoke to the crowd of 15,000 people, he was flanked on either side by 10 children wearing bright yellow baseball caps. He had invited them to temporarily leave behind their parish group pilgrimage in the square and follow him to the platform in front of the basilica to be part of his VIP entourage for the morning.

The pope said he was beginning a new series of audience talks on the Ten Commandments and how Jesus leads people from the law to its fulfillment.

He asked people to reflect on the reading from the Gospel of Mark and Jesus’ response to a young, wealthy man who asked what was needed to inherit eternal life. This question reflects the burning human desire for a full and dignified life, the pope said, but the challenge is “how to get there? What path to take?”

Unfortunately, the pope said, some people believe this restlessness, this desire to live a better life is too dangerous and should be tamped down.

“I would like to say, especially to young people, our worst enemy is not concrete problems” no matter how serious or tragic they may be.

“The biggest danger in life is a bad spirit of adapting that is not meekness or humility, but is mediocrity, pusillanimity,” that is, cowardice or fear, and making the excuse for doing nothing by saying, “that’s just the way I am.”

“Where will humanity end up with young people who are tame (and) not restless?” he asked.

Referring to Blessed Pier Giorgio Frassati’s insistence that it is better to live fully than to just get by, the pope asked the crowd whether a kid who is “mediocre has a future or not.” The pope agreed with their answer, “No. He just sits there. He doesn’t grow” and mature.

Reaching maturity, he said, is coming to realize and accept one’s limits, and it is also seeing what is lacking in one’s life, just as Jesus said the rich young man: “You are lacking in one thing. Go, sell what you have, and give to the poor and you will have treasure in heaven; then come, follow me.”

This invitation to leave behind everything and follow the Lord, is “not a proposal of poverty, but of riches,” the real treasure of everlasting life, he said.

If told to choose between having “the original” or just a copy, who would choose just a copy, the pope asked.

It is difficult to see why young people would choose then to follow those Christians who are not choosing “the original, if they see us putting up with half measures. It is terrible to encounter Christians (who only go) halfway, dwarf Christians who only grow a certain height and have a tiny, closed heart,” he said.

Young people need the example of Christians who invite them to grow, “to go beyond” and look for more.

“We have to start from reality,” with the way things are, “in order to take that leap into what is lacking. We have to scrutinize the ordinary in order to open ourselves up to the extraordinary.”