The pope’s man in Rome: Vicar for Rome diocese to become cardinal 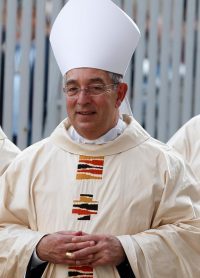 Archbishop Angelo De Donatis, papal vicar for the Diocese of Rome, was one of 14 new cardinals named by Pope Francis May 20. (CNS photo/Paul Haring)

VATICAN CITY (CNS) — Cardinal-designate Angelo De Donatis met Pope Francis five years ago when the pope invited himself to the Holy Thursday lunch that another of the cardinals-designate hosts each year.

A few months after the 2013 lunch in the apartment of Cardinal-designate Giovanni Becciu, an official in the Vatican Secretariat of State, then-Msgr. De Donatis received a phone call from the pope asking him to direct his first Lenten retreat as pope.

During the retreat, the future cardinal told Pope Francis and top Vatican officials that their task was not to show the world what the church, priests and faithful do, but what God does through them.

Christians must make a clear effort to recognize that “we all are simply ‘forgiven sinners,'” he had said.

“Forgiven sinner” is the way Pope Francis often has described himself.

In 2017, Pope Francis chose Cardinal-designate De Donatis to be his vicar for the Diocese of Rome.

The pope is the bishop of Rome, but his responsibilities are so vast that he needs a vicar to ensure the proper pastoral care of the Diocese of Rome. Governing the diocese in the name of the pope, the vicar exercises most of the powers of a local bishop and presides over a vicariate with most of the usual offices found in the chancery of a large archdiocese, including offices for personnel, religious education and ecumenism.

Cardinal-designate De Donatis, 64, found out Pope Francis intended to make him a cardinal while listening to the car radio May 20 as he was driving home from a parish visit.

“It left me speechless,” he told Vatican News.

As vicar of Rome, the cardinal-designate also serves as archpriest of the Basilica of St. John Lateran, the cathedral church of the diocese, and as grand chancellor of Rome’s Pontifical Lateran University.

In his first major address to students and staff, he focused on the importance of openness and dialogue in the search for truth and ways to communicate truth in the modern world.

“In the world and in the church, there are changes underway that strongly shake established certainties, producing deep unease and causing fears that condition the reflection and decisions of individuals and entire communities,” he said in the Nov. 9 speech.

“Within the church, it increases the temptation to look at the present with pessimism and to look at the past as the golden age to return to,” the cardinal-designate said. “This gives birth to a hostile attitude toward a world seen as the enemy, forgetting that it is made up of people with a precious history, with wounds, joys and hopes, people who, often without knowing it and even following the wrong paths, nevertheless are searching for happiness.”

Remembering that “the merciful gaze of our common Father is on everyone,” he said, the church needs to use “serene and prudent” judgment to help people distinguish between “what is fundamental and what, on the other hand, is tied to a time, culture or custom” and requires updating.

The fight against pessimism in the church is not a new battle for the cardinal-designate. In his statement to the Diocese of Rome when he was named papal vicar, he said that as a spiritual director of seminarians, priests and laity for decades, “I have had the opportunity to contemplate great miracles of grace. The Lord is faithful and at work.”

Born Jan. 4, 1954, in Casarano, a town in southern Italy, he earned a licentiate in moral theology from Rome’s Pontifical Gregorian University and was ordained to the priesthood in 1980 for the Diocese of Nardo-Gallipoli. He was incardinated as a priest of the Diocese of Rome in 1983.

Pope Francis named him an auxiliary bishop of Rome in 2015, giving him particular responsibility to care for the continuing education of priests.

Ordaining him a bishop in the Basilica of St. John Lateran, the pope told him to remember how his father went to great lengths to find a parish that offered Mass without a homily.

NEXT: Cardinal-designate focuses on the pastoral at doctrinal congregation